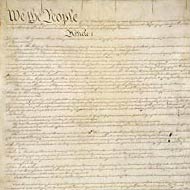 Get to know the Constitution: a document whose genius lies in its malleability. Historian and author Pauline Maier talks ratification.

Harmony Hunter: Hi, Welcome to the podcast, I’m Harmony Hunter. We’re looking ahead to Constitution Day this week, and professor, historian, and author Pauline Maier joins us by phone to talk about a document she’s spent her career studying: the Constitution. Pauline, thank you for joining us.

Pauline Maier: Thank you for having me.

Harmony:: Well Americans had a big problem after they won independence, and that was that they had to figure out how to run a country. They were determined to make it very different from the monarchy that they had just separated from.

Pauline: Well of course the big challenge that Americans faced was how to create a government that didn’t have a king. All that they had known and all that they had thought about was how to organize an empire or a series of states under a monarchy. So there were a number of issues on the organization of power within the states and their relationship to the central government that had to be settled.

Pauline: All right. By 1787 there seemed to be a pretty general agreement that a government should have a bicameral legislature: that it should have a lower house and an upper house. And that power should be divided. Indeed, that there should be a legislative, an executive, and a judiciary.

So that was significant. There was also an agreement that, above all, the fiscal powers of the government had to be settled, because the government was essentially bankrupt in 1786.

Harmony: We talked about what they all had to agree on, but there were more than enough points that the states disagreed on when it came to ratifying a constitution. Can you talk a little bit about some of the key dividing issues that people really debated over before we were able to have ratification?

Pauline: The big issue, I think, had to do with whether or not the constitution could be amended. Much of the traditional view I think is a little misleading.

The convention adjourned September 17, 1787. At that point the Constitution was simply a proposal. And it was even a proposal from a body that had not been authorized to propose a new government. Basically the convention was supposed to be proposing changes to the Articles of Confederation, but it decided it could give greater powers to a government under the Articles, which consisted only of an elected Congress.

What was even more, I think, divisive was that the convention basically decided that the country should not amend it -- that the country should take it or leave it, roughly. And that is, “Take it as we propose it, or reject it.” That they could not make any changes in the proposal. Now that is really surprising if you think about it, because the convention was chosen for another purpose, it had no right to write this document, and then to say, “You have to take it the way we write it.”

What right did it have to do it, or to say how their proposal should be ratified? But somehow it had none of those rights, actually. But the Federalists basically rallied behind that and said, “No, you just ratify it as it is, if there are any changes to be made, Article 5 says how it can be amended, and that’s how it should be done.”

But a number of people thought parts of the Constitution were ambiguous, and some cases, profoundly dangerous. And they wanted it either clarified or modified before it went into effect. That was really the difference.

Harmony: We’ve talked a little bit about Article 5. I wonder if Article 5 of the Constitution doesn’t capture sort of something of our national identity, because to me, it contains the real genius of the Constitution, which is, as you said, the ability to amend the government later.

They knew that this was going to need to be, as we call it, a living document. It also contains the worst idea in the Constitution, which was putting off the issue of slavery, which nearly led to the dissolution of the union in the Civil War.

Pauline: Well, the Constitution never uses the word “slavery,” let us say that. On the other hand, it did preclude any end to the slave trade for 20 years.This was a concession to Georgia and South Carolina who said without it they weren’t going to join. Others pointed out that there had been no deadline for the end of the slave trade previous to this.

In other words, implicitly the Constitution said, after 20 years you can end the slave trade. As much as people execrated the continuation of the importation of slaves, understanding this was a moral and even a security issue, it said, “Now we can end it, after 20 years.”

Madison said, “Would you rather let South Carolina and Georgia, keep them out of the union indefinitely? Would you rather do that?” That it was not a bad trade to say, “All right, we’ll let the slave trade go on for 20 years but the union has a chance of surviving entire.” He said it was a good bargain, and it was not a bad argument. George Mason in Virginia, however, said he’d have let them go. So it was contentious from the beginning. But it is true that it allowed the end of the slave trade after 20 years.

Harmony: What strikes me about that is, the founding fathers really disagreed among one another. You couldn’t find two that would agree with what the country should be. What would some people be surprised to learn were some of the founders and their objections to the Constitution as it was being considered?

Pauline: More and more I became conscious as I worked on this book is that the big issue is really not surprising. The central rights issue went back to the Revolution. The convention meets four years after the completion of the Treaty of Peace. All of the conflicts of the independence movement are vividly in people’s minds, as well as the price they paid in human blood to win their independence.

You know, that form of language has a way of making your mind go blank. You say, “What does it mean?” Well what it did mean was that Congress would have the right to increase the ratio, so that it was one for every 40,000, one for every 50,000 one for every million. They could make it smaller and smaller.

The argument was by the critics of the Constitution that Congress should not have that much power over the people’s right of representation, particularly given that Congress had really wall-to-wall taxing power in Article 1, Section 8. So taxes and representation were terribly important. I think they were central to the whole fight over ratification.

So these were the concerns: taxes, representation, military power. That came out of the British past but it certainly informed the debates on the Constitution.

Pauline: True. The issue came up time and again. Many states did have bills of rights, not declarations of rights that logically were the opening part of a constitution. They laid out the rights that the government was supposed to protect.

The theory is, in the second paragraph of the Declaration of Independence, that people have certain rights, and that governments are formed with the people’s consent to protect those rights. Not all states had them, but many people thought that the lack of such a document in the federal Constitution was highly suspicious and that one should be added to it.

The Federalists answered that it was unnecessary. The leader here was James Wilson of Pennsylvania. Again, the language is one that’s sort of mind-boggling. He said in the state constitution, the states exercised all powers except what was reserved whereas in the national government, everything was reserved except for what was given. That is, the national government could only exercise the powers which were allocated to Congress in Article 1, Section 8.

So by inference you could read more powers of Congress into the Constitution than were explicitly stated in Article 1, section 8. It was a very sort of complicated argument, and others very quickly found answers to it. It was clear that the demand for a bill or declaration of rights being added to the Constitution had substantial popular support.

Harmony: You’ve written extensively on our founding documents: the Declaration, the Constitution, and the Bill of Rights. But your most recent project, which comes out in October of 2010, is a book called “Ratification, The People Debate the Constitution.” You have dissected the process of ratification state-by-state; it’s no small feat. How did you get started on that project?

Pauline: Well I got started because an editor at Simon and Schuster realized there was no narrative history of the ratification of the Constitution and went looking for a historian to write it, and I said I would do it in about 20 seconds. I had no idea how long it would take. I did know that there was a vast collection of documents available, a documentary history of the ratification of the Constitution which was being published by the State Historical Society of Wisconsin. It is magnificent.

That’s one way of using it, and I must say I have some difficulty getting my mind around what difference that really makes. Is there a common understanding of the Constitution? If so, my guess is that it’s one that we’ve pretty much left behind. Explicitly the notion was that all the powers of the Constitution are pretty well confined to Article 1, Section 8, to what Congress could do. And of course we have expanded that substantially since then.

But the other thing you really do learn by this is you get a portrait of the US in 1787 and 1788. What is remarkable is how extensive the debate was and how informed ordinary citizens were. Some of the most exciting documents I came across were, for example, records of town meetings in Massachusetts. Where people came together and they were to elect delegates to the convention, and they were told actually that’s all you should do, send someone off, let them listen to the debates, and then they can vote yes or no.

They weren’t content with that. They studied the Constitution carefully. One town in western Massachusetts had no less than four informational meetings before it met to decide what it thought of the Constitution, and the conclusion was, “As written, it’s no good.” It’s either changed or voted down. But they knew it inside out. They could refer to parts of it and know exactly what it meant. When they spoke, they were so eloquent and so knowledgeable. You get a sense of a country that was heavily politicized, highly informed.

A Massachusetts delegate to Congress named Nathan Appleton became one of my heroes. He said that this was an intelligent people, and the people could be relied on. I think his conclusion is pretty well verified by looking at these local records.

Harmony: Thank you for being with us. Look for Pauline Maier’s book, “Ratification: The People Debate the Constitution,” which comes out in October 2010.