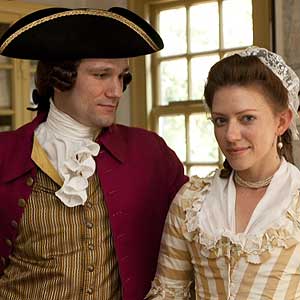 Colonial wives were confined by strict legal codes, but widows and spinsters enjoyed some unexpected freedoms. Author Karin Wulf talks about the outliers in her book, “Not All Wives.”

Harmony Hunter: Hi, welcome to the podcast. I’m Harmony Hunter. Married women of 18th century England and the colonies couldn’t vote, couldn’t own property, sign contracts or practice a profession. Under the law of coverture, their inheritance became their husband’s. But unexpectedly, some of the curses of spinsterhood and the misfortune of widowhood gave women some freedoms that their married sisters didn’t enjoy.

Professor and author Karin Wulf is with us today to talk about some of the discoveries she made in researching her book, “Not All Wives.” Karin, thank you for being here today.

Karin Wulf: Thank you so much Harmony. It’s a pleasure.

Harmony: Well reading your book was such an eye opener for me because I grew up knowing that women didn’t have the right to vote, and of course everybody who’s read any Jane Austen knows that women couldn’t inherit property, but the inequity, it went so much deeper. It was a different culture for women. How can modern women even begin to imagine the difference that gender made in the 18th century in the colonies?

Karin: Well I think that in some ways, we can see across the world the difference that gender makes. We know how excited people have been that Saudi Arabia is allowing two women to go to the Olympics and participate as athletes, for example. Women in the west are astonished that women in very traditional societies are not allowed to drive, for example. We know that in traditional cultures, gender is a hierarchical form of power, just as race is or class. So I think that the notion that gender is really powerful and can be powerful isn’t confusing to people. I think what’s astonishing is how powerful it was in our relatively recent past, and how powerful it was in an era we think of as revolutionary and promoting independence.

Harmony: Women really had no voice.

Karin: Well you know what’s interesting is that so many vestiges of those laws of coverture â€“ which by the way were really complicated â€“ is that it is somewhat straightforward in that married women cannot own property and they can’t make contracts and things like this, but there are ways that people get around it. For example, we know that lots of women acted as professionals. Simply they had to do so behind the cover, literally, of their husbands who were the official legal representatives and could take anything that they earned, but anyway it’s a complicated little legal arrangement there.

Harmony: And this is what we’re talking about when we use the term “coverture.” Can you tell us what that means in the 18th century context?

Karin: Yeah. So coverture is a principal that comes from the French actually and it means “to be covered.” Its clearest articulation was by William Blackstone, the 18th century English legal theorist who described how women would be covered by their husbands and how married women, once married, would recede essentially from public view and from any kind of public capacity. So they couldn’t own property in their own name except under extraordinary circumstances and there are a few women who managed those extraordinary circumstances. Once married, their real estate became their husband’s or at least his to manipulate for profit. Any personal property they owned became his outright. They couldn’t sign a legal contract; they couldn’t show up in court and testify in court. They had basically no legal capacity whatsoever.

And obviously this is an enormously complicated legal doctrine because it’s impractical. So for example, in port cities in the colonies or in England too, you know, women whose husbands went off to sea who were mariners who were gone for extended periods of time. Really? Could they not operate or function at all? Of course not. There were ways that people kind of got around it but the point is that was the letter of the law and it was followed mostly so it was pretty incapacitating.

Harmony: The premise of your book is that the law can’t imagine women who are not wives. It kind of leaves out these categories of women. The law looks at women and says, “Ok, these are individuals who will become married and have children.” But it’s kind of hard for them to figure out where women who never marry who enjoy that lovely title of spinster or women who are widowed where they fit in, but they actually end up being outside the law a little bit. They have some kind of extra freedom, some little extra maneuverability.

Karin: Well, what’s interesting is that the letter of the law is quite clear that women who are not married are straightforward. They simply can act as men do. In other words, it’s married women who are a specific problem for the law; they’re the ones who are problematic. Unmarried women are not problematic, legally. They’re problematic culturally though. So there are ways in which despite the fact that the law says that a woman who is not married can do whatever a man can do, basically. The law doesn’t have to specify. It only specifies married women, in other words.

So unmarried women are not a kind of a target of legal regulation the way that married women are, but culturally there’s such a presumption that women will marry and be married and the hierarchy of gender is such that women generally are seen as dependent and powerless and not intellectual so culturally they cause quite a problem. They look different, basically. And as we know sadly, historically difference does attract negative attention.

Harmony: This is such a complex issue because it’s not only one of gender, but it’s also one of class. You could have a very well-off gentry woman who is single and she might be just fine happy to run her life, but if she was a very economically disadvantaged woman she would have so many fewer options even though she was single and not covered by her husband.

Karin: Yes. Absolutely. And one of the things I found is that there are so many more single women in cities in early modern Europe and in the colonies in part because cities offered an opportunity, very meager though it was, but an opportunity for employment for women who are not married. They get really terrible jobs. There are some records in Philadelphia, for example, of a woman who swept the steps of the courthouse for just a pittance, but that’s a job she could have. And those kinds of employment opportunities, terrible though they were, were not available in more agricultural areas so unmarried women tended to cluster. Either they came to cities or they didn’t remarry and allowed themselves to kind of remain single if they were in cities, but they definitely faced terrible, terrible trial. It’s very, very difficult.

Harmony: And some of these women who became wards of the state by bearing children in their single state were a particular problem?

There’s no such thing as, you know, enforced child support for example. No one’s going around figuring out who is the father and making him pay. But there are some examples in court where people do go to court and say, “He’s the father.” And the father has to pay a fine, and sometimes he’s asked pay some amount of support for the child, but it’s very minimal. It’s nothing like we would recognize as ongoing child support. So having a child while single is tough business whether they are not married, they never married, or whether it’s a widow who’s lost the primary bread winner in her family.

Harmony: When did women start to protest this? When does this tide start to turn?

Karin: Well I think there are so many examples of women protesting gender inequity through the modern West. We can find examples in the 15th, 16th, 17th century. The title of my book Not All Wives actually comes from a protest that some petitioners wrote in England during the English Civil War in the mid-17th century saying, “We are not all wives. You must not treat us all as if we are this particular, protected and subordinated class. You need to give us some access, some political access.” So women have long found ways of protesting what they see as these inequities.

Some people would argue that dropping and changing those legal restrictions doesn’t make an enormous difference until the middle of the 20th century though, actually. Changing economies make restrictions on what married women can and can’t do with their property; tricky to calculate.

Harmony: It’s interesting that you bring up the comparison to the Declaration of Independence because I think about the founding fathers and who they intended to have the right to vote. It was white property-owning males.

Karin: Well what’s so interesting is that many of the founders were very conversant with, and aware of, and quite tantalized by smart, accomplished women. Jefferson spent a great deal of time as did Franklin in some of the great salons of France where there were intellectual women who gathered other intellectuals around them. They were certainly conversant with women in the colonies who were also intellectual and very accomplished. Benjamin Franklin was a friend of and kind of a compatriot of a woman named Susanna Wright who lived out in Lancaster County.

I wrote about Susanna Wright quite a bit. She’s a fascinating woman who’s absolutely brilliant and a close correspondent of the most, sort of the highest intellectuals in the colonies. She does scientific experiments, she acts as a diplomat with the Indians, she acts as a kind of legal jurist in some informal cases. She’s quite extraordinary, but she does all of that in the period really before the Revolution takes place. And part of what I argue is that the Revolution is seen as unleashing progressive forces which will eventually allow for the kind of full participation of women and African Americans and Native Americans and so on and so on.

But part of what I argue is that the Revolution actually increases the emphasis on white masculinity as the key to political participation. That’s the key. It’s not property actually. The shift is away from property as a key determinant of who gets to participate. Strangely, under the old regime of property is what gives you access, some women â€“ despite a kind of lack of ability to vote â€“ some women were able to have a voice because they had property. They had capacity.

There’s a wonderful study by a couple of friends of mine who show how women in 18th century Virginia use their property to empower property -less men, to go and sort of do their political bidding essentially. So there are ways in which women actually lost out when kind of poorer white men gained, in a sense from the revolutionary movement. So it’s not a kind of a steady march towards, you know, access and participation and freedoms for women just as it wasn’t, you know, for any other group. I think it’s a more complicated story than that, somewhat less satisfying than a kind of steady march.