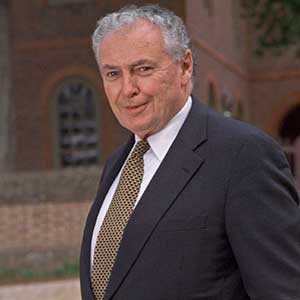 Colonial Williamsburg rises to meet the future with a new mission as a Center for History and Citizenship. Foundation President Colin Campbell describes the shift.

Harmony Hunter: Colonial Williamsburg began as a restored city. As its reach has grown, so has its mission. It’s with this in mind that Colonial Williamsburg introduces a new focus as a center for history, citizenship and democracy. I’m here today with Foundation President Colin Campbell, to talk more about this idea. Colin, thank you for being here today.

Colin Campbell: Thank you, Harmony, for the invitation. I’m delighted.

Harmony: I’m glad to have the chance to talk with you. Tell me more about this idea of Colonial Williamsburg as more than a restored city.

Colin: Well actually, Colonial Williamsburg has always been more than a restored city, in the sense that Mr. Rockefeller coined the phrase at the beginning, “That the future may learn from the past.” “The future may learn from the past” does not suggest at least to me, nor did it to Mr. Rockefeller, that we’re just talking about restored buildings in a city that was famous and important in American history. But rather, what happened there, and how what happened there can be instructive for the future. So I think that’s really been the case for Colonial Williamsburg ever since its very first days.

Harmony: Colonial Williamsburg has been in a long evolution and we’ve reached the point today where we’re focusing our mission on the center for history, citizenship and democracy.

Harmony: Tell me what that’s about.

Colin: Well what it is essentially about is that the lessons of American democracy â€“ how it began, how it evolved â€“ that can be learned at Colonial Williamsburg are extraordinarily relevant to our understanding of America today. And from our perspective â€“ I say our perspective, my colleagues and my other associates here at Colonial Williamsburg â€“ from our perspective, it is really important to understand the contemporary relevance of what happened here in the 18th century.

I think people often look at historic sites, including this one, and say, “Well that was interesting, but how is it connected to today?” Well, all you have to do is attend a program in the Historic Area, a Revolutionary City program for example, and the connections with today are perfectly clear. And they’re important. And from my perspective, it’s really essential that Colonial Williamsburg be out there making that connection for people, helping them understand why the values that were so central at the time of the Revolution are central today, why they have been the subject of debate ever since they were initially articulated, and how that debate is ongoing, and how important it is to the future of our democracy and to the role of citizens in the democracy.

So that’s really how we got going on this subject. And it really started back in the middle of the, well maybe 2004-2005, where conversations evolved to the point where we introduced the Revolutionary City. This is a logical next step being a Center for History, Citizenship and Democracy from the introduction of Revolutionary City seven years ago.

Harmony: You’ve said that the connections between 18th-century history, the formation of America and today are very clear. Let’s be explicit about some of those connections. What are some of the values that were important to our founders that are still central to American democracy today?

Colin: Well, I think those are articulated particularly well in the Idea of America program, which as you know, is a secondary school program designed here at Colonial Williamsburg to teach history in the new and exciting ways. That program is built around this concept of an enduring debate about values. And some of the values that are referred there in that program, I think, are really what we are talking about.

I happen to be trained as a lawyer, and so the value of law, and the conflict, potentially, between law and ethics, which we have seen throughout American history, is an example of ideas and values that were part of the enduring debate that were a big issue in the 18th century, and are certainly a big issue today. Just take civil rights, and you understand that the civil rights debates that were taking place in the ‘60s and ‘70s here in this country and still are today, in fact, really involved the tension between law and ethics.

By the way, as a former college president on a campus where students were active in addressing political issues concerned about them the law and ethical challenges and conflicts were very obvious to me almost on a daily basis as I tried to do my job; that is having to do with the role of protest in the evolution of a democratic state. So that’s one set.

Another would be unity and diversity. And again, that’s rooted partly in my own experience on a college campus that was deeply committed to a diverse student body, and at the same time, wanted to be a place that had a shared conception of what it was about, a shared set of ideals, a kind of unity. And having unity and diversity work comfortably together was a real challenge in that setting, and it’s a real challenge for our nation. And so, again, there’s the kind of issue, not issue, but the kind of conflict that comes around these values.

Â The third that I find particularly interesting is freedom and equality. Because we all articulate our commitment to both of those values, but I think we have to realize that if we were totally free we’re unlikely to be totally equal. And that is a tremendous challenge in the way this country has evolved and the way it has to deal with issues today.

Harmony: When we talk about becoming a center for history, citizenship, and democracy what form does that take? How do we do that?

Colin: Well, the way I see it and my colleagues and I are spending a lot of time on that right now. We’re trying to flesh out the concept. But the way I see it is that everything we do should have that role as a Center for History, Citizenship and Democracy in mind. That includes the programs in the Historic Area. And they do that now, I mean, the stories that are told, whether they be in the Revolutionary City, whether they be through the RevQuest game, whether they be in the trade shops, the stories that are told really talk about those subjects. They’re more historical, but they also talk about citizenship and how it came about, and the significance of democratic thinking to the birth of the nation. So that’s one way that it happens, and it has happened that way for a long time. That’s why I say this is more evolutionary than it is kind of radical.

Secondly, we have had, over the years, programs at the Hennage Auditorium or at the Kimball Theatre or behind the Palace where we’ve had speakers that addressed these subjects in more contemporary terms. In the future, with our center concept moving forward, we will see more of that kind of activity, more effort to talk about today’s issues and to link them to the 18th century values and conversations that were taking place at that time. So we see that on-site both in the Historic Area and really across the Foundation.

And then there’s off-site. And indeed, in some ways, the inspiration for being a Center for History, Citizenship and Democracy came from the way our off-site programs for students across the country have developed. Those programs and, most particularly, the Idea of America for secondary school students are programs that speak directly to these subjects. And as you know, in the Electronic Field Trips and in much of the material that supports the Idea of America, we have the opportunity to make the connections between the 18th and 21st century. We just want to do it more intentionally and more intensively than we do now.

Harmony: We’ve talked about how, but I think the deeper question might be, “Why?” It’s so important now to connect the lessons of democracy with those of citizenship.

Colin: Oh, you know, I could be emotional and dramatic and say democracy that’s in trouble, and actually I think it is. Our democracy is not functioning well. There’s a state of paralysis in the way our government is functioning in Washington between the legislative branches and between the executive and the legislature that is really unhealthy for our society. It is part of what democracy is about: getting through that process.

The only way we’re going to get through that process is for our citizenry to understand that they have a role in making that happen. They have to participate. Citizens brought about the Revolution. Citizens are essential to sustain the fruits of the Revolution. There’s just no question in my mind about it, and I don’t think citizens are playing enough of a role in that process today. What we can do is first demonstrate to citizens how important it is they play the role and then, second, give them a sense of how it has been done, and how it could be done, and how it should be done.

Harmony: Part of Colonial Williamsburg’s metamorphosis has been to come into this modern age and take advantage of some of the new technologies that people are using. It’s not so much about an on-site visit; it’s about so many of these other programs that you referenced: our Electronic Field Trips, our electronic outreach, our on-line presence. How are we combining all of these modern tools to remain relevant in the market and in Americans’ minds and lives?

Colin: Well that’s the job that we’re trying to do right now, is to bring it together. This is a fascinating place. It has a lot of different things going on. Most of them are of the very highest quality. They’re important. But there is probably not a sufficient coherence in everything we’re doing. So we need to bring them together, we need to recognize that we have to integrate everything we do. And when I say everything, I mean on-site, off-site, hospitality, all of it has to be integrated in a way that says to people, “You go to Williamsburg and there is a particular kind of experience. An experience that is informative, that is inspirational, and that is fun.” It’s critical for us to bring it all together, and bringing it together around the theme of being a Center for History, Citizenship and Democracy seems to me to be a particularly good way to achieve that end.

Harmony: Colin, thank you for being here today.

Colin: Thank you very much.