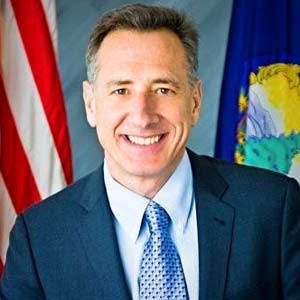 Vermont Governor Peter Shumlin talks with us about the challenges of applying the founders’ vision to modern governance. Even after two centuries, the America they envisioned still matters.

Harmony Hunter: Well we’re pleased to welcome today Governor Peter Shumlin from Vermont, who’s here to talk with us about the government that the founders created and the execution of the democracy that was created 200 years ago. Thank you for being here with us today.

Peter Shumlin: Hey, it’s so great to be here.

Harmony Hunter: Well we’re thinking about public service as probably one of the highest forms of citizenship, and the challenges of executing the government that the founders created. Do you think much about that legacy, that founding legacy in practice today in your job?

Peter Shumlin: I do, and I suspect the other governors around the country do right now as well. You know, we’re at a time in our nation’s politics where it doesn’t matter what political party you come from. I think a lot of us are discouraged by the lack of progress for what’s best for people in Washington, D.C. and the result is that governors now are the place where real change is happening to create jobs, to improve people’s lives and to make a difference for our kids’ future.

So I think that all of us are first of all privileged to be here in this place where our founders had such extraordinary vision. What I call the real early liberals who had the vision to create a Constitution, the best democracy in the world, and to do it in a way that had so much foresight in understanding that we had to protect our liberty and that we had to promote the greatest democracy in the world. So we think about that, the founding fathers, their vision, I think in our jobs in some way, almost every day.

Harmony Hunter: We think about the foresight of the founding fathers, but the government that they created for us is really a blueprint, and the issues that we face today are issues that they never could have imagined. Your record is very liberal socially and you have been on the forefront of some issues for civil rights, for healthcare, for promoting local movement, the issues that they might never have predicted. Do you find yourself trying to interpret their wisdom as you put that into play in your own policies?

Peter Shumlin: I think I do to some degree. You know, I think one reason that democracy works for us in Vermont is exactly what the founding fathers envisioned, which is less partisanship and more people working together to do what’s best for their state. We’re making real progress in Vermont on the jobs front. We’re making huge progress on moving off our addiction to oil to renewable energy so that we have a cleaner planet in the future. We’re actually passing the first single-payer publicly financed universal access healthcare system in the country, where healthcare is a right and not a privilege. We’re making great progress of early child education and higher education.Â

But I think the reason we can get those successes is that we care less about partisan politics and more about outcomes making a difference. Â And then I often ask myself, “Well, how come we can do those things in the little green mountain state of Vermont? Why can we make progress where others can’t?” I think the answer is the one thing that the founding fathers never envisioned was a political system that’s driven by billions and billions, millions and millions of corporate dollars to influence elections in our democracy.

What they envisioned was what happens in Vermont. People come together, you knock on doors, you know your governor, you know your legislator, you know you U.S. Senator, if you need them you call them up on the phone or if â€“ they didn’t envision telephone probably â€“ but you know you get in touch with them. Democracy works. It was designed for small numbers. I don’t think it was designed for the politics of today. Huge money, 60-second sound bite TV ads and no personal contact with your representative to this democracy.

Harmony Hunter: Do you think their democracy is up to the challenge of the modern age where the dollar might be more powerful than the vote?

Peter Shumlin: I think that if we continue to live under the Citizens decision for the United States Supreme Court where we interpret corporations as citizens in terms of free speech and ability to give unlimited dollars to candidates without ever knowing where that money came from, who gave it, or why they gave it, then our democracy is in real trouble and I think the founding fathers never envisioned a scenario quite like what we have right now.

Harmony Hunter: In this conversation we’ve talked a lot about the founders as a group and it’s easy to assume that they all felt the same way. But what we know from history is that the founders disagreed vigorously and long and vociferously. So I think that they might have left a model for us as well about how to disagree, but how to do it respectfully and how to disagree productively. How can we bring that to today’s political picture?

Peter Shumlin: I hate to go back to campaign finance and sound like a broken record here, but I do believe that campaign spending, unlimited campaign spending, money in elections where your average citizen isn’t the one who’s promoting the message from the politician. It’s the corporations, the big donors, give tons of money to these candidates and then put up a divisive message on television that in 60-second sound bites, that’s almost always untrue, it’s almost always negative, the ads themselves are almost always lies and distortions.Â  And then we set the tone for a debate in those campaigns that the politicians feel they have to continue.

What I feel about public service, and what I love about being governor of Vermont is, I really don’t focus on getting re-elected. I focus on getting tough things done: to create jobs, to create economic opportunities to Vermonters, to face real challenges and to talk about what I view as the decisions we must make to be stronger in the future. I think if we had less sound bites, less money in politics, more politicians there to do what is right for the future we’d have a stronger country.

Harmony Hunter: We’ve talked a lot about politicians and their role and their challenges, but I also want to think about the challenges of citizenship; the people that you represent. What is it the job of a citizen to do?

Peter Shumlin: Well, it is the job of a citizen to be as actively involved in their democracy as they can. But I think one of the things that is driving lower voter turnout in this country is the fact that our leaders don’t tend to talk about the issues that matter to Americans. Let’s talk about what’s happening right now in this country. We’ve just come through the toughest recession in American history. Running up extraordinary debt in Washington, and we now have a real challenge.

We have a middle class, whether it’s Vermont to California to every state in between in our great nation, where on average middle class Americans are making the same money they were making a decade ago. They’ve seen no increase in incomes, but their costs are going crazy. Gas is $4.00 a gallon, $3.50 a gallon, whatever they’re paying. We know if you want to send your kid to college, college tuition is going up much faster than their incomes. Healthcare costs rising so fast that if we let healthcare costs rise at the rate that they did for the next 10 years over, as fast as it did over the last 10 years, we will literally be spending all of our disposable income on healthcare. It’s just not sustainable.

So we have these cost pressures, you know, middle class America right now looks at their retirement plan, says, “You know, I played fair, I played by the rules. I look at my retirement plan; all of a sudden it’s not looking so good. What happened to me? I played by the rules, my income hasn’t changed.” The gap is that the American public expects their government to work for them and they are seeing that they are not moving ahead and they’re playing by the rules. That suppresses voters’ excitement about voting. They listen to their candidates’ 60-second sound bites, mostly negative, and they go, “You know what? None of this is going to change my life. I want a politician, a public servant who’s going to fight for me.”

How do we ensure that we have the best quality education, public education, so when our kids are in public schools in America they graduate knowing that we can compete with the countries around the world that frankly are beating us in the public education sector. These are the things Americans care about. If you talked to them as a politician, and dealt with them, delivered on promises, voters would come back to the polls.

Harmony Hunter: What’s the most powerful thing that a citizen can do?

Peter Shumlin: Get out and vote. Take a stand. Whether it’s online or in meetings, go out and let your voice be heard. The founding fathers that wrote this extraordinary Constitution that is the very bedrock of the best democracy ever invented by humankind and we can all agree that we got problems with our country, but there isn’t an American I’ll bet you that will say, “I’ve seen a better example of how to do government.” We’ve got it right. We have problems, but we’ve got it right. But citizens and citizen participation is the key to our success and if we turn off the public we all lose and our democracy will be weaker.

Harmony Hunter: You say we’ve got the best government on the planet. Why?

Peter Shumlin: Because we’re still, in my view, the place where the checks and balances and the ability to be heard works no better than in America. And that’s what the founding fathers envisioned when they tried to put this great experiment together.

Harmony Hunter: Glad to have you here today.

Peter Shumlin: It’s just a real privilege to be here. I got to say as a governor who’s working hard to make a difference it’s great to be in Williamsburg in a place where it all started and it’s a real privilege.