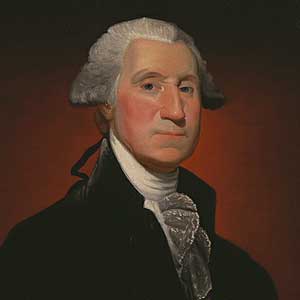 George Washington shares his thoughts on the role of government and his hopes for the future in part two of this listener-question interview. Ron Carnegie interprets the first president.

Harmony Hunter: Hi, welcome to the podcast, I’m Harmony Hunter. Today is part two of our interview with President George Washington, asking him questions supplied by you, our listeners. This week we’ll be talking about his hopes for the future and the role of government in society.

You saw the writing of a document that governs us for longer than any one individual will: the Constitution. As it was being debated and written, was there something about it that you would have liked to have seen done differently?

George Washington: Ma’am, your question puts me in a difficult circumstance. We met privately. There was no record kept. Even the windows of the building in which we met were barred. The whole purpose for that being that should the Constitution survive, should it have been ratified or not ratified, and then continued or not continued, not based on our personal opinions in what may have been spoken within that chamber, but rather by its own right.

I’m very displeased that certain members of the convention have seen fit to print their memoirs, which is contrary to our original intention. Our personal opinions in the matter are to remain just that: personal. The Constitution should be viewed as a whole and on its own merit, not based upon what arguments may have been in the chamber regarding it. I’ll tell you that there’s not a single man who was at that convention who is pleased and satisfied with every portion of that Constitution.

Harmony: In creating the United States of America, we’ve established a new type of government. What do you think is the fundamental purpose of the federal government?

George Washington: Well the system of government is always to provide safety and security to the people that are governed. It’s the whole reason we enter into community in the first place. It might have pleased the director of all things that man live independent and on his own, but it did not. We require one another. We live in communities. We look to each other for mutual support.

If I might quote Mr. Madison, “Men are not angels.” If we were angels, we’d have no need of government. Government is there to preserve security for the citizens of that government and to provide them some defense and support for those rights that are given by God and nature. Those rights referred to by Locke as the rights to life, liberty and the pursuit of property.

Harmony: Should the federal government help to steer, control or strengthen the economy of the nation?

George Washington: As best they can, certainly. We certainly have done so under my administration. I’ll remind you how unfortunate our system of economy was under the previous system of government, under the Articles of Confederation. In fact it’s the weakness of that economy caused in a great part by the weakness of the Articles of Confederacy that caused the creation of our new American Constitution.

My Secretary of Treasury has taken great actions, some of which have been controversial. He’s adopted, for instance, state debts by the federal government which has caused some controversy to those states that had already paid their state’s debts. We’ve seen the creation of a national bank, which will leave us in a stronger position if we find ourselves again in a necessary war. A number of actions have been taken by this federal government to increase our economy and we’ve done so successfully. Our matters are entirely improved from where they were eight years ago.

That being said, I think we must always endeavor to avoid falling into those sins of faction. And we have seen these last several years the rise of a number of factions. We’ve seen regional factions, North against South, East against West and vise versa in both cases. We have seen economic faction betwixt the wealthy and the poor and vise versa. Perhaps the greatest curse of them all is we have seen the introduction of party politics into our shore.

The alternating domination of one political party over another spurred on by the spirit of revenge will always drive a nation further and further from its better interests and greater counsels. It causes a man to not be a servant of his nation, but merely a servant to a political party. Oh, certainly there’ll be those who might argue that this spirit of faction is necessary to keep a government free. That may be true in those governments of a more monarchial cast, but in any free government such as our own, there will always be enough difference of opinion for salutary purposes without the creation of political party. Political parties are a very dangerous fire, which if allowed to burn unwatched, will soon consume everything before it.

Harmony: Our Constitution and its Bill of Rights are the very definition of what we want our union to be. How do you hope these documents will guide future generations and future governments?

George Washington: We have been made witnesses of the most novel and astonishing of spectacles of entire people gathered together peaceably to determine for themselves under what form of government they believe they will live most happily. The people have gathered by way of their representatives and with serious deliberation have created a new written Constitution and as you say now Bill of Rights are far superior to its predecessor.

A system of government which allows not only for a balance of its powers, but allows for its own amendment which may well be the most important of all of our political principals and customs. This ability to amend our systems of government, but we should also always be mindful that just as with any other human institution, that time and experience are just as necessary to determine the usefulness of governments and constitutions. We should never enter into alteration or change simply for the want of novelty or innovation and before any such alteration is made it must only be made by the amendment of the people as a whole, and until it’s made, we must always remember that the Constitution is the law of our land and our governing principle.

Harmony: It’s taken a great deal of effort, bloodshed, time, to unite these thirteen states in the current union. Can you allow yourself to think about the possibility that one day one or several of them might wish to secede from the union and do you feel that that would be constitutional?

George Washington: It’s already been threatened, ma’am. And I certainly do not think it will be constitutional. When we adopted the Constitution, and in fact it states right within the Constitution how it would be ratified. They took the affirmative vote of nine of our then 13 states to determine whether or not the document would be ratified into law. It doesn’t say there that you will vote for it to be a part of the union, but that if nine states did vote it would then be law for all 13.

We’re not some gentlemen’s club that its members are free to come and go as they see fit and there’s already precedent laid for this. I’ll remind you that Rhode Island did not ratify the Constitution until after it was already in effect and they only did so by coercion by the others by economic sanctions and the threat of military action.

Harmony: What young leader do you have the greatest confidence in from the future? Who looks promising?

George Washington: I have a great deal of faith in my former Secretary of the Treasury, Mr. Alexander Hamilton. He is a man of excellent fine parts. He is perhaps a little too guided by his vanity, but that’s not unusual in a young man and in some occasions vanity can be useful.

Harmony: On that thought, what are your hopes for the future of this country? You’ve been its first president, what do you hope successive presidents and governments will be able to do?

Harmony: President Washington, it’s been our great honor to have you on the program today. Thank you so much for being here.