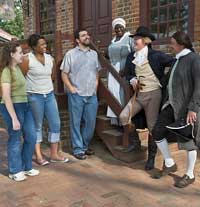 Debates over eternal American values are reborn with every generation. Co-creators Bill White and Bill Wagner help make the connections on a new interactive website.

Harmony Hunter: Hi, welcome to the podcast. I'm Harmony Hunter. Colonial Williamsburg was endowed by its creators with a singular purpose: That the future may learn from the past. American values are eternal, but they come wrapped in different circumstances as each generation redefines what an American is.

Our guests today, William White and Bill Wagner are collaborators on a new Web project called Colonial Williamsburg Connect. Thank you for being here.

Bill Wagner: Good to be here.

Bill White: Thank you for having us.

Harmony: Well, this is a complicated site, and we're introducing it to people who might not have ever heard of it before, so I want to do an exercise and pretend I'm a stranger on an airplane. We've never met before and I ask you what you do. Explain this site to me. How do you explain what it is and what you want it to do to somebody who might never have heard of it before?

This site, Colonial Williamsburg, but this site, is that vehicle for our visitors who are scattered all over the United States, all over the world. A place to come and reconnect with those stories and be energized by those stories.

Harmony: Bill White, by your response I get the sense that you feel like this is a ball that we might have dropped: the duty of a citizen, the job of active citizenship.

Harmony: So we've built a website around this idea and this philosophy. Bill Wagner, can you explain to me how that website works and what we want people to do when they go there?

Bill Wagner: What the website does is not only the philosophy, but how. When we take those stories that Bill [White] talked about, and usually through media, some kind of media whether it's print or through video, through sound or interactive games, that kind of thing, that we take those resources and we kind of tie them together around whatever the subject matter is.

The final thing that we want them to do, once they've looked at those resources and they kind of understand the context of what it is we're talking about, then we want them to go online and to blog and to talk to us about, express their opinions about what we've given them and to see if we can create some kind of national dialogue about these subjects.

In addition to those resources we're also asking to vote on some issues. We're also doing some live webcasts from time to time during a specific content period and to interact with us during that; to kind of bring it a little bit forward and immediate for them as well so it's not just a blogging exercise with them.

Harmony: So what we're doing with Colonial Williamsburg Connect is tapping into the story, the historical story, and then trying to relate that to what's happening today to make history something that's more personal, more relatable and it has more of a permanence. We have these issues with us all of the time.

Harmony: And so you have a structure or a framework that you like to work within when you're comparing historical events? Maybe you'd like to talk to us about that?

Bill White: Think about the United States of America as a long-running, enduring debate. A debate about values that are essential to every American. These are values that we all believe in and we all hold dear. But Americans never give up one thing to get the other, and many of our values are actually in tension with each other. We never say we'll give one up in order to get the other. We always say, "How do we get both of them?"

So, freedom and equality for example, we all believe in individual liberty and freedom, but we know that we can't be individually, each person individually free. That's anarchy. We just run around and stomp on the rights and privileges of eachother. We have to figure out how to temper that some way. We temper it with equality, but we don't like too much equality; we're not communists either. So, we just believe there's some place in the middle where we get the most freedom, the most individual liberty and freedom and we get the most equality.

We talk about our unity and our diversity. We're one American people, we're one nation. And as soon as you say it, then we start to subdivide ourselves into small groups. We divide by ethnicity, we divide by race, we divide by our religion, and we divide by the region of the country we belong to. You name it.

And then the last of those value tensions is law and ethics. We're a nation of laws. We believe in the rule of law and yet we know that the law is not ethical. It's not inherently ethical. We have to work to make it ethical. You only have to look as far as Jim Crow laws to figure that out. And so we're constantly challenging the law. We challenge it in the courts, we protest on the streets, we're constantly pushing to see if we can't make our law more ethical. And we understand we can't just live by our ethics either. Prohibition had lofty ethical ideals but it was pretty impractical and ended up increasing the lawlessness in our communities. We have to balance those two things.

Harmony: So the important thing with the website is not that we find the right answer, but that we continue the debate. How are we fostering and encouraging that debate on this site, Bill Wagner?

Bill Wagner: Every couple of weeks we're posing questions that are about our current events now, but also relate to our history. We're asking people to comment on those issues so that we can begin that dialogue. The purpose of all of what Connect is trying to do with the website is to push it towards some kind of interaction between us and the general public, especially our fans; friends of Colonial Williamsburg that believe in what we do. We're taking this just a step further in order to kind of increase the interactions so that we kind of take the content a little deeper, I think, for everyone. I think that's certainly part of what we want to do.

We're trying to divide the content into areas that make sense for us and that certainly have a current relevance. We're doing six weeks on our Revolutionary City which we're really excited about. It is the first time, at least that I can think of, where we take what the Historic Area does best, which is Revolutionary City and its live street theater and it's a popular program, and what we do best in Productions, which is to make television programming, and combine those two into a live event that is relevant for people that are there that day on the street and also for a distant audience in California or anywhere else that is interested in what we're continuing to do content-wise.

And then later on we're going to do programming around Independence Day. What does Independence Day mean to you? What has it meant to some of our historical characters throughout the years: Frederick Douglas, John Adams, contemporary figures? So what we want to try and create with that is basically an understanding of what, especially, the Declaration of Independence means to us and what the particular day means to us. And then later on this year we want to kind of round it out, since it is an election year, with the election of 2012.

What we want to combine is what Bill [White] was talking about with the value tensions, law versus ethics, freedom versus equality, with also a civil discourse component to it and our history. So it's kind of triple layering that. And also talking about those rough spots, those rough elections in our history. It wasn't always nice. It sometimes was very contentious and we're in a contentious period now too. So it's relevant for that. We're trying to bring the citizenship dialogue, if you will, to the forefront with those kinds of content areas.

Harmony: Bill White, Colonial Williamsburg has always focused who we are as Americans, where we come from, what our values are, who our creators are. I feel like what we're seeing now today with this program is kind of a sea change in not so much as who we are as Americans, but what we do as Americans. Talk to me about the focus on civic engagement and participation that's really at the heart of this new programming.

Bill White: I think Colonial Williamsburg tells a story about a time in our history when what we would call "The Founders" created the modern citizen. The citizen we've all sort of become a little too comfortable with today. The citizen that we don't think about too much as we go about our everyday business that we don't act intentionally enough about. They did because they were creating it brand-new. They grew up as subjects of the King of Great Britain. It's different being subject to a government.

We're not subject to a government. Our government is subject to us. They're the ones who took that whole equation and flipped it and began to create the practical application that's the modern citizen. We need to understand what a gift that is. How remarkable that still is today.

Harmony: Let's go back to that stranger on a plane metaphor. If you said that we're not doing enough as citizens, what is it that we should be doing? What should I do when I get off the plane?

Bill White: What you should do when you get off the plane is, you should begin informing yourself about the issues that are important to you. Not just the opinion that you think you have, but you need to be informed about the opinions that other people have.

Harmony: And that process of educating yourself and beginning the debate and finding people who share your opinion and also disagree with you can happen on the website. Bill Wagner, where can they find the website?

Bill Wagner: The website is on history.org/connect. That's where we're at. I think one of the things that Connect is trying to do is, it's trying to remind ourselves that we now, in the 21st century, are also in our past. And so by giving them examples of how our past happened, and current views on how that past happened, we'll be able to see ourselves within that past. I think that that helps us inform our future, it helps inform our present and it allows us the freedom to become impassioned about where we are right now.

Harmony: You mentioned some webcasts coming up. When can I see those?

Bill Wagner: Our first webcast for Revolutionary City will be live from the Raleigh stage of Revolutionary City on April 14 at 3:00 p.m. in the afternoon. It's a Saturday. Where ever our audience is it will be terrible to go outside so they should stay inside and watch the live webcast.

Harmony: And we can watch that at History.org/connect. Thanks very much to both of you for being here.