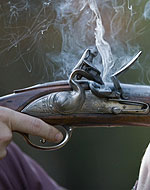 The gun is part of America’s creation story. Gunsmith George Suiter describes the technology of this potent tool.

Harmony Hunter: Hi, welcome to the podcast. I'm Harmony Hunter. The gun is a tool that has grown along with our nation. While our attitudes around them have changed and evolved, we've never been without them. Master gunsmith George Suiter joins us today to talk about the genesis of that long relationship here in colonial Virginia. George, thank you for being here today.

Harmony: I want to ask you a really basic question, but I'm hoping it will help lay the groundwork for the rest of our discussion. How does a gun work?

George: Well, basically you've got gunpowder in the barrel and numerous ways to ignite that powder and the expanding gas in the barrel pushes the bullet out the end. Now in the 18th century there are flintlock guns. You've got a flint striking against a piece of steel and that's what creates sparks to ignite the priming charge of gunpowder.

Harmony: The three primary components of any gun, I understand, are the lock, the stock and the barrel. Can you talk to me about how those come together at the Gunsmith Shop as you're recreating 18th-century weapons?

George: Well, we make a gun barrel which is just basically a long skinny tube by forging a flat bar of iron around a steel mandrel and forge welding the edges of it together so we create a seamless tube. Once we've gotten that tube formed at the forge then we can ream the inside of the barrel to make it perfectly smooth and a uniform diameter. If you want a rifle then we can cut the spiral grooves inside the gun barrel and that pretty much completes the barrel.

Then the lock is a mechanical means of striking flint against steel. It basically has a main spring that powers a part called the cock that strikes a piece of flint held in its jaws against the piece of steel called the battery or the steel or the frizzen. Those sparks land in a pan full of gunpowder and that ignites the gunpowder in the barrel through a small hole in the side of the barrel and then the stock, of course, is what holds it all together.

The stock is the wooden part. All the metal pieces, like the barrel and the lock are an inlaid into a big stick of wood and then you cut away the excess wood and shape it. The good part about a shop like mine is we can make that stock fit an individual according to his length of arms, his neck, and his build in general.

George: Well, gun making in a large urban center like London was divided up by the mid 18th century in the 21 separate trades. You've got guys that are gun stockers and ramrod makers, barrel forgers and lock filers so with half a million people and all of them looking for jobs they can afford that specialization.

In a town like Williamsburg that's maybe 2,000 people if it took 21 men to make you a gun you'd never sell enough guns to feed 21 people. So in small towns in America you pretty much have to have one man able to make every single part of the gun which is the least effective way, the most expensive way to make anything, is to have one man do it all.

Harmony: As a one man show then, how many trades do you have to have, if not mastery of, at least competence in?

George: Well you have to be able to forge metal. That's where the smith part of my title comes from. So you're forging metal like a blacksmith or silversmith and also you have to cast metal where you melt it; turn it into a liquid and pour it into a mold. That's the way a lot of the brass pieces like the trigger guard and butt plate are made.

Harmony: What types of guns are you making that are representative of what would have been on the market in the 18th century?

George: Well a little shop like ours would not make any kind of military guns. We're too small, too inefficient to get a military contract so we wouldn't make muskets, but we're making the guns most people needed for pests around the farm or hunting. Not only hunting for meat, but also market hunting and selling deerskins. Things like that are big business in the 18th century. Or maybe a pistol that someone out traveling on the highway might carry for self protection; so basically civilian guns.

Harmony: How long does it take you to make a gun?

George: Our best guess in the shop today is probably spend 400 man hours making a rifle, which I'm sure is slower than an 18th century tradesman.

Harmony: What's the part of that that takes the most time?

George: The gun barrel's close to 100 man hours so that probably takes most of the time on the gun.

Harmony: We talked about the way that the gunsmith had to adapt when he came to the colonies to work. Coming from that are there characteristics of American guns that emerged?

George: Well, like I said, one guy is making the whole gun so you see some pretty individual styles evolve and also regional styles. Today a student of, say, the American long rifle can oftentimes look at one and tell where it was made and also sometimes who made it or at least be able to attribute it to a known gunsmith because these guys are working in small communities and schools of gun making evolve over a period of time.

If you look at a gun made in London they're pretty much made to a formula. So there was only one way to shape a gun stock and only one way to engrave it so you can't really attribute a gun to a gun maker in a place like London.

Harmony: It seems like knowing the manpower that's involved, and the expense that comes with that, making guns in the colonies, that guns would be items that were kept in families for a long time and handed down generations.

George: A lot of them were. I've known of guns that had seen more than 100 years of full time service so a lot of them do see generations of use.

Harmony: Is the gunsmith shop in the Historic Area based on a gunsmith that we knew of in the period?

George: Actually, yes. The Geddy family was on the site where we are for more than 50 years. We've got at least 4 generations of Geddys making guns on that site. Their father, James Geddy, Sr., starts probably sometime in the late 1720s, 1730s, right around in there and he dies in 1744. He's got eight children, two of his older sons follow him into the trade and take over his gun shop and continue working there through the Revolutionary War.

Harmony: When people come and visit the Historic Area, why should they make sure to stop and see the gunsmith?

George: It's a fun place to see. There's lots of stuff going on. We've got usually molten metal or forging metal or working wood so there's always some activity going on most of the time. It's a good chance for people to actually pick up a gun and feel it, see what it feels like to hold one. You can feel the weight. Of course everyone says, "Oh how heavy," but guns haven't changed in weight significantly in 300 years now.

So it's a good way to see stuff going on, it's a good way to actually handle a gun and see up close how it works and maybe get in touch with some of your ancestors and see what they had to go through to hunt and to feed themselves and to protect their crops.

Harmony: George, thank you so much for being our guest today.