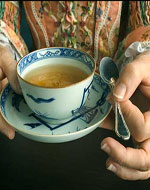 The manners of the parlor codify the feminine culture. Kristen Spivey keeps up appearances in The Polite Academy.

Harmony Hunter: Hi, welcome to the podcast. I'm Harmony Hunter. We often think of the past as an era of bygone genteel rituals, and in some cases it's actually true. Those rituals are the subject of a program called "The Polite Academy" offered in the Historic Area.

Program creator Kristen Spivey is here to tell us more about the deceptive complexity of the manners of the parlor. Kristen, thank you for being here today.

Kristen Spivey: It's my pleasure.

Harmony: Well, you've just launched, well with a team of co-creators I assume, a new program called "The Polite Academy" and you're talking about the really ritualized ceremonies that take place in a lady's parlor. Tell me a little bit about the program.

Harmony: The room itself connotes polite behavior, "the parlor." This is the formal room of your house where you would receive guests and so it sounds like the idea behind this program is that a lot of these interactions with guests that come into your home are very codified.

Kristen: Oh, absolutely and we still do it today, but not nearly, I think, as self-consciously as they did it in the 18th century. There were expectations. Children were not even allowed to appear in public until such time as they had perfected or at least gotten the rudiments of polite behavior.

Harmony: Let's look more closely at the 18th century. This is a program that focuses on the accomplishments of a lady in the 18th century and they fall into kind of four major areas, the first of which is tea service.

Kristen: Well, tea of course was a fairly new commodity really, a little over 100 years old in British society and in America of course and there had been various rituals that developed around the service of tea. And a lot of different things, and being able to afford those things said something about you so just being able to serve tea.

You can show that you know how to behave; you show that you know how to drink your tea and the hostess has a chance to show off the things that she has acquired, but it does not presume that anyone there needs anything to eat or drink. So it's just a way to show off your accomplishments. There's literally a minor form of ceremony in the way the tea is served, but also in the way it's made.

Because teapots are not, you're stepping into maybe a cold room. There will be a fire, but if you're not right next to the fire the teapot is not going to be warm. It's going to be cold and if you put hot water into a cold teapot and try to brew tea in it, the water is going to chill too quickly and it's not going to brew very good tea, so you have to warm the pot. There were things, and I love this when people see a little bowl on the table and think, "Oh, is that something to wash your fingers?" No, it's a slop bowl. You just throw the slops into it which means leftover tea, the water that you're not going to use, the dregs from the bottom of the pot.

Harmony: So a lady had to know her way around a teapot.

Harmony: She also had to be accomplished in music and letters. Tell me what some of the expectations are for accomplished genteel women in those areas.

Kristen: Well, music of course is something you provide your own entertainment. But you don't want to be the student who jumps up and down and says, "pick me, pick me." That was not considered polite. You always refuse first. But, if they say "Oh, please," you don't refuse twice. That's rude. So it's that fine line you're walking. You don't want to put yourself forward, but you don't want to refuse too much. Then, on the second asking of course they step forward and play upon whatever instrument, but that is another thing.

It's the instruments that are appropriate. Ladies do not want to destroy the appearance of anything above the shoulder. So English guitars, which are held in the lap, are very appropriate because, well it's very pretty. A lady who is seated at a spinet or what was then sometimes referred to as the new-fangled forte piano, but that's pretty because her hands, her arms remain down, her elbows are not being flung out, she is not puffing, huffing and puffing as they might on a flute or anything of that nature.

Now, of course, you also want to make certain that you do know what you're doing and getting lessons was very important for a young lady. A family, a father who wanted to make certain that his daughter would be able to make a good marriage would want to see that she acquired the accomplishments that were considered necessary and music was one of them.

Harmony: Also letter writing is probably a big part of a lady's day. What are some of the guidelines around that?

Kristen: You know, its funny because a lot of people think that in the 18th century women didn't know how to write, but the higher up you go in society the more often you will find women who are more than capable not only of writing but of writing well. And in fact, people like Thomas Jefferson had daughters. He admonished them to be very careful about their writing. That they were to look up words if they weren't sure how they were spelled because there was nothing that gave a woman greater honor than to be able to spell well.

But writing letters, exchanging news with friends, with family, with people who are distant from you was very important. Because we have so many different modern means of communication we don't commonly think about the very great importance of letters. Of being able to communicate across, even just from here in Williamsburg, for instance, to Fredericksburg, which for us is like an hour and a half ride, but in the 18th century that could be a day or more of driving to get there so you're going to want to be able to exchange letters to let people know how you are, what is happening around you, how the rest of the family is. And letter writing in itself was considered something of an art.

Harmony: And your handwriting?

Kristen: Oh, yes. Today we think of it as calligraphy. And there were people who were better able to manage a quill because a quill can be your enemy. It can splatter; you have to know how to cut a quill properly. When you hear the word penknife, that's a knife for cutting a pen, a quill. So a penknife was kept on hand to enable you to sharpen your quill so that your words will flow neatly.

Harmony: And one thing that should never appear in a letter of a lady in the 18th century is gossip. Is that correct?

Kristen: Some people might call it gossip, but we do not. It is passing the news. And in fact there was more than one lady who claimed that gentlemen were much more gossips than the ladies. Well after all, they knew more. They got out, and that's the thing. In the 18th century there was this feeling that people had a particular place and that was sometimes referred to as their sphere so a lady had her sphere and her sphere was the home and even more her sphere was that parlor.

Now, this is, notice I say "ladies," because there was a distinction between a lady and a woman. A woman might be in business, a woman might be a tavern keeper or a milliner, or in some other type of trade. A lady would not. A gentleman was indeed a gentleman and part of the distinction is he does not have to work with his hands. But the ladies' sphere was inside the home. The gentleman's was the public face of the family. His sphere was to go out into society and so they each had to learn how to behave within their own sphere.

Harmony: You mention in the program that the object of a lot of these manners and rituals that we learn is to attract a mate.

Kristen: Absolutely. It's not just "Hey, I'm pretty" or "Hey, I'm good looking", but "I know how to behave." Because I've been taught how to behave and I will represent you well within your home. But it's also a little bit of the, "I'm attractive, I can amuse you in the evenings." You don't have to just sit there. There's so many things. And we still do it today, but it was much more ritualized in the 18th century. You know, and there were only so many opportunities to interact so you had to make sure that when you did interact you had all of the moves down.

Harmony: Having tea today might not be as ceremonial as it was in the 18th century. It might be putting a mug in the microwave. So things are very different, but I think they are also very much the same. How have these rituals from the 18th century sort of morphed into the present day where were getting the same thing done, but maybe in a little bit different way?

Kristen: Well, for one thing we do have more opportunities to meet, but you'll find often that it's over a drink. How many people say "let's have coffee together?" The drink may have changed a little bit, but the opportunity to interact in some fashion stays the same and being able to present yourself during those times.

What it all comes down to is how you present yourself and that is as important today as it was 200, 300, 400 years ago and nobody can learn it on their own. They do need to be taught. Today we're not very formal about it, but we do teach it. If it's not reinforced it sometimes doesn't get used.

Harmony: Kristen, thank you so much for being our guest today.

Kristen: It's been my pleasure.