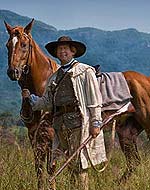 Harmony Hunter: Hi, welcome to the podcast. I'm Harmony Hunter. The legend of the American frontier is intertwined and largely defined by the mythology surrounding one man, Daniel Boone. As with all legends, fragments of truth are at the bottom of the Daniel Boone story.

Here with us today to help sort truth from fiction is Phillip Hamilton, a professor of history at Christopher Newport University. Professor Hamilton, thank you for being here with us.

Phillip Hamilton: Thank you for having me.

Harmony: Well we wanted to think about westward expansion, which is something that's happening toward the tail end of and following the Revolutionary War. Let's just outline first when the Constitution is signed, it's signed by 13 states, today we're 50 states, what's happened between now and then?

Phillip: Well, quite a bit has happened between now and then. What you had in 1787 during the Constitutional Convention and during the ratification debates, you had the overwhelming bulk of the population along the eastern seaboard. Really from the Atlantic Ocean to the Appalachians.

Harmony: Daniel Boone is one guy who represents a lot of people who are undertaking this mission to push the borders west and to push into what Europeans call a wilderness, but it was actually pretty well settled and occupied by a variety of native tribes.

Phillip: Well Daniel Boone first went to the West, west of the Appalachian Mountains, primarily as a hunter. He was searching out new game. Eventually he sees the great potential for the western lands. He sees the extraordinarily rich, fertile lands, especially when he moves through the Cumberland Gap and like most Americans at this time he knew there were growing population pressures in the East and so just before the American Revolution, for instance, he works for a land company surveying the western lands; the Transylvania Company. So he's part of this process of bringing European or British American civilization to the west.

Harmony: We think of him as this self-reliant wilderness man. Is he actually living a lifestyle very different from other hunters?

Phillip: No. Like most hunters in this period on the frontier, they're basically utilizing European technology, firearms, some of their clothing, but they're also using Indian ways, Indian ways of hunting. So it's really kind of a hybrid culture that the frontiersmen and the hunters used and a lot of people who came upon these hunters, when they first saw them, they would have a hard time distinguishing whether they were European or whether they were Indian.

So in many respects you had the cultures really being merged together on the frontier. And that's why some historians call the frontier in the late 18th century a middle ground. A middle ground between a Native American culture and a European culture.

Harmony: At this point it's deceptive because it almost is like a feel-good story where, you know, Europeans and Native Americans are sharing their knowledge and their hunting ways and it seems like it's kind of a nice merge of cultures.

Phillip: It's interesting, his relationship with Indians because, you're exactly right, there were periods of great violence, but there were also periods of peaceful interaction and really commercial exchange. So it's hard to say it's one thing or the other.

Boone himself was quite sympathetic to Indian culture and to the Indians in general. He never expressed any animosity toward the Indians even though two of his sons were killed by Indians. I think he sympathized with the plight of the Indians. He realized that given the westward movement out of the colonies he realized that their way of life was eventually going to be doomed as more and more Europeans and Americans moved west of the Appalachians.

Harmony: One of the most romantic and conveniently true tales around Daniel Boone is when he was adopted as a member of the Shawnee Tribe.

Phillip: Yes, that was during the siege of Boonsborough. The Shawnee Indians attacked Boonesborough and Boone was actually captured in February 1778. The chief of the Shawnee was an Indian named Black Fish and actually befriended Boone and adopted Boone into the Indian tribe. So, and Boone befriended a lot of Shawnee, but he always was first and foremost loyal to his family and to American civilization.

That's why, after five months with the Shawnee, he escaped and made his way back to Boonesborough. He covered 160 miles in five days to warn them that the Shawnees were coming to attack the settlement again, and warn them. And so, again, there you get this kind of ambiguous relationship. It's a period of where they're friends with the Indians, but they're also at war with the Indians. So it's hard to kind of pigeonhole the relationships, again, as one thing or another.

Harmony: What Boone does by pushing the American borders west is to sort of pave the way for the further eradication of native tribes. Does Boone ever tell us what his feelings are about the result of his life's work, that it ends up displacing so many of the people who he's developed such an affinity for and a sympathy with?

Phillip: He never articulates, as far as I know, any regret that he had helped bring British American civilization into the West or American civilization to the West. He never expresses any doubt about what he did. Boone was very much an American. He was well respected in the communities that he lived in, he was elected three times to the Virginia House of Delegates, he was a land speculator, he engaged in commercial hunting, so he's very much part and parcel of this kind of European civilization. But he never really expresses any kind of regret for how things have unfolded in the course of his lifetime.

Harmony: We think of Boone as this solitary mountain man, but he's actually a guy trying to provide for a pretty large family.

Phillip: Yes. He and Rebecca had 10 children over the course of their marriage, so he had a lot of sons and daughters. In the 18th century families were much more corporate units and parents very much felt the responsibility to provide for their children; to provide land, provide some sort of nest egg from which to develop that land.

So one of the reasons many people, including the Boones, moved westward was to have access to land to pass to the next generation. And I think that's what eventually carries him to Missouri. When he ran into such legal problems in Kentucky he found that the only way to really provide for his family, as they're getting older, was to move to Spanish territory and to obtain land from the Spanish government.

Harmony: One of the juiciest parts of the Boone legend is around his family, that one of his children might not have been his own, that his wife Rebecca might have gotten a little bit lonely while Boone went on one of his long hunts. What does the record tell us about the parentage of Jemima Boone?

Phillip: That's a frontier legend that's pretty famous and pretty well known that apparently Rebecca, according to the legend thought that Boone, who was off on one of his so-called long hunts where he was gone for a number of months at a time hunting, had probably been killed and then had fathered a son with one of Boone's brothers, I think it was.

Phillip: Well, Boone is an interesting figure because he becomes a celebrity during his own lifetime. A land speculator in Kentucky named John Filson wrote an account of Boone; a very romanticized and very dramatic and melodramatic account of Boone's life. That was called "The Adventures of Colonel Boone."

Filson was a land speculator in Kentucky and was trying to encourage settlement out in Kentucky and by telling the story of Daniel Boone, he hoped to encourage more settlers to move west of the Appalachian Mountains. But he did talk about certain traits that Boone had a lot of Americans like to associate with themselves. That he was independent, he was brave, he was honest, and he was noble. These are traits that Americans always like to think that we as a people and we as individuals have and it really struck a chord.

Filson's biography of Boone sold very, very well and it made Boone a celebrity. And I think that Americans still like to think of themselves as possessing these nobler traits. And Boone liked to believe he held all of those traits. Even though the Filson biography clearly has some inaccuracies in it, Boone never criticized it in the course of his lifetime. He said it was all true even though we know it wasn't. So, but I think there is a certain timeless quality about the character traits that Filson began describing about Boone in the 1780s and I think it's something that really speaks to us as a people today.

Harmony: When we try to separate Boone the man from Boone the legend, how much of the legendary status do you think Boone actually earned?

Phillip: Well he did lead a pretty remarkable life, and he lived most of his life on the frontier moving between various cultures. He fought in wars, was brave in wars and so there's a lot of legend that surrounds Boone and his exploits, but there's also a lot of truth in the stories. And again, that's what makes him such an enduring figure is that it wasn't all myth, it wasn't all storytelling. There are large kernels of truth in just about every story that we know about Boone.

Harmony: Phil, thank you so much for being our guest today.

Phillip: All right. Thank you very much.