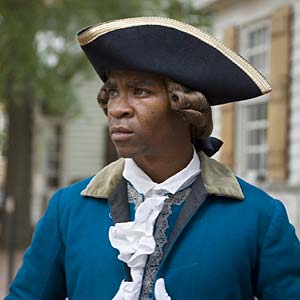 The diverse relationships between slaves and masters were governed by kindness, betrayal, trust, and cruelty. A new Electronic Field Trip, “Harsh World, This World” examines the complex familiarity of slavery.

Harmony Hunter: Hi, welcome to the podcast. I'm Harmony Hunter. Relationships between slaves and their owners were inherently unequal, but they were also surprisingly close. Personal servants and valets shared the most intimate details of their masters' lives, and they accompanied their owners on simple errands into town as well as into momentous battles.

This complex relationship is examined more closely in a new Electronic Field Trip from Colonial Williamsburg. It's called, "Harsh World, This World" and our guest today is one of its producers, Aaron Wolfe. Aaron, thank you for being here today.

Aaron Wolfe: Thanks for having me.

Harmony: This is an Electronic Field Trip which examines some of the varied relationships between slaves and owners, both positive and negative. Where did this idea come from?

Aaron: Actually, it started from an idea that I had about exploring the very different relationship between masters and their body servants, contrasted to the way that master relationships would have been formed from masters and slaves working out in the fields and those skilled workers and things like that.

The valets and body servants and man and maid servants always shared a much more close relationship with their masters than those would have necessarily since those kinds of body servants would have slept at the foot of the masters bed.

Harmony: What did you want to try to bring out by more closely examining the sort of intimate nature of those relationships between slaves and their masters?

Aaron: I think most people have the idea that all people who were enslaved experienced the same kind of slavery, and all masters who owned people felt the same way about those that were enslaved. Part of what we are trying to do is to shatter that myth.

Slavery itself is a very complex social institution and because it is a social institution with legal foundation and it's subject to all manner of kind of relationships just like any kind of interpersonal relationship would have been. So that's what we're really trying to get at. So we want to try to get away from that to these interpersonal relationships where that black and white idea becomes a lot gray and a lot more complicated.

Harmony: Where did you find examples in the historic record? I mean I imagine you had to flesh out examples of cruel and unfeeling masters, but also compassionate and kind masters. How did you find those stories?

Aaron: There all over the place. Most great men wrote diaries and most famous men had things written about them. So their relationships with those enslaved individuals was a part of those observations. We also went to slave narratives.

For example, one of the stories that we tell was taken out of Harriet Jacobs' "Life of a Slave Girl" narrative. It was written in the 19th century. So here we have a primary source from someone who is enslaved who recounted a great number of these kinds of incidences and we went through and picked one that we thought was most poignant to illustrate the kind of difficulties in having slaves and masters relate with each other.

Harmony: You started out by thinking about great men and their body servants and one of those stories makes it to the Electronic Field Trip. You show the relationship between Thomas Jefferson and his manservant, Jupiter. How long were those two together?

Aaron: They were together for over 40 years. They were about the same age, and I think Jefferson at one point called Jupiter his best friend. Now I'm not quite convinced that Jupiter would have felt the same way, but I think that speaks to how we think about these relationships.

There was a sense, especially in the 18th century and the early part of the 19th century among slave owners and especially very large slave owners like Jefferson was, he had a moral responsibility to take care of what he would have called "his people." That's one of the great 18th century euphemisms. But Jefferson also would have felt that he was responsible for taking care of his children and his wife and his paid white servants and everybody.

He was the person that was totally in charge of everything. This paternalistic attitude that everything that everybody else gets on the plantation comes from him and the slave owners took that responsibility very seriously and really didn't understand why slaves would have rebelled against that. There basic argument would be "well, as a slave owner I provide food and clothing and shelter and what else would these people need or want?"

Harmony: I was taking care of you.

Aaron: Exactly. It's inherently unequal and so no matter how close they were, that there is always that separation. And that is a kind of attitude that would have been taught to children at a very young age and would have been probably one of the most difficult things for both parties really wrap their head around.

You know, when you're 10 years old and you've grown up with someone who is the same age as you are and you do the same kinds of things: you're eating meals together, you've been basically raised by the same people. And then all of a sudden that relationship has changed.

Harmony: Are there examples of master slave relationships that didn't make it into the field trip but that you ended up uncovering in your research for this show?

Aaron: There are a bunch of them actually. One of the hardest things when you're trying to create a show like this is to have to cut down on what do you want to tell and the stories that you want to relate. The relationship between William Lee and Washington was one of the ones that we just couldn't find a way to fit it in, but it's a really fascinating relationship. William Lee was Washington's manservant prior to the Revolution and served with him throughout Washington's time in the Army. So when we talk about Washington at Valley Forge in Morristown and all those things, William Lee was there as well.

One of the most remarkable stories from that relationship came when William Lee asked Washington to purchase his wife from another owner and allow her to come and live at Mount Vernon. Washington did it, but he wrote about how he didn't like the woman and he didn't want to, but because of his affection for William that he would acquiesce to his request, which really, I think, touches on this kind of very complicated relationship.

Harmony: It's so hard when we're studying history to resist the temptation to make judgments on the past based on the values that we have in the present day.

Harmony: When you're looking at stories between masters and slaves like this, you want to have compassion for them in that they're trying to deal humanely with some of their slaves, but there still operating within an institution of slavery. What really were you trying to bring out? At the end of the day the Electronic Field Trip is a program that's produced for school age children. What did you want to illustrate for them? What did you want to help them to understand when they're looking at these complex and sort of morally ambivalent situations?

Aaron: Well, I think that's, we want them to analyze these morally complex situations. It's very easy to put things into this side or that side and have diametrically opposed viewpoints on things. It's very easy for us to categorize things in that way so that we can handle what that has to say and part of the reason for this field trip is to kind of create ambiguity and allow students to analyze these situations.

Harmony: What are you proudest of with this show?

Aaron: I really like the way that we deal with this subject. Because its important and its one of those things I think from the very beginning that Electronic Field Trips have tried to do is show African Americans quest for freedom and equality and this is one more in that story.

Harmony: Aaron, thank you so much for being out guest today.

Aaron: Well, thanks for having me.

Harmony: And we hope that all of our listeners will visit History.org/trips to see the lineup of all of this season's Electronic Field Trips. Thanks.