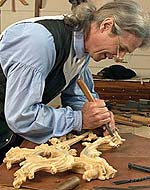 Harmony Hunter: Hi, welcome to the podcast. I'm Harmony Hunter. This week, we continue our occasional series on the trades practiced in Colonial Williamsburg's Historic Area.

Today we're joined by master cabinetmaker Mack Headley, who you can meet in his shop on Nicholson Street next time you visit. Mack, thank you for being here today.

Mack Headley: Thank you for having me.

Harmony: Well, I said you're the master cabinetmaker. How long have you been at this business?

Mack: Well, I've been cabinetmaking all my working career. Here in Williamsburg full-time since 1984.

Harmony: I mentioned your shop is on Nicholson Street. It's one of my favorite shops to see because it's got this flying wing out over a little brook. Is that just a happy accident or is that functional?

Mack: It's a pretty scenic setting, but the cabinet business kind of grew over time. Initially it was just one main workroom and apparently after the master had been there for 10-12 years or so he added an addition, we think as a ware room or a show/sales area.

Harmony: So the shop where you work today is actually based on a historic 18th century tradesman that we know practiced there.

Mack: Yes. It's been reconstructed after a pretty thorough archaeological investigation back in the '60s and really put back on the original foundations, but the building is all new.

Harmony: What do we know about the man who practiced there in the 18th century?

Mack: Well, Anthony Hay's first appearance in Williamsburg is from a legal proceeding in 1748 and then a very interesting advertisement in late 1750 when he is looking to build a work crew. Apparently, he wants journeymen cabinetmakers who know their business or would be considered taking on a promising young apprentice, and again apparently trying to build up a shop.

Harmony: So we know about him from the documentary record, but you also mentioned that there were some excavations on the site. What did they find there?

Mack: Well, there was a tremendous concentration or an interesting clear line between refuse that was from the cabinetmaking business and the domestic refuse of his house, which was just adjacent to the working shop. And lost tools, broken parts of furniture, incomplete pieces that were discarded or lost. Just some thousands and thousands of artifacts, it was one of the most productive trade sites in colonial America.

Harmony: When you look at the artifacts that were found from that site, what's the most interesting to you to see?

Mack: Well, one of the most unusual findings were a couple of pieces that were damaged in construction. They were never made into completed pieces, but there's one table leg and one chair leg, which were apparently ruined and discarded, but they're in an intermediate stage.

I mean, we have lots of completed original objects, but there are very few drawings from the 18th century and there are very few intermediate steps that can give us a hint of the in-between process between finished and raw materials.

Harmony: We're saying that you're the cabinetmaker, but you make more than cabinets. How does the nomenclature of that work? Why are you known as the cabinetmaker in the 18th century, but today we would understand this trade as someone who makes fine furniture?

Mack: Well, I think today's term has kind of been co-opted by kitchen cabinet makers. The origins of the term "cabinetmaker" may well come from earlier years when the cabinet is a private room in the house and we are workers for the cabinet.

Cabinetmakers split off of the architectural joiners trade in the 17th century as more ornamental furniture and ornamental interiors come into popularity. So we kind of pick up, and by mid-18th century making of chairs and tables and chests and all kind of fashionable household furniture's going to fall under the workers for the cabinet.

Harmony: Now you said "fashionable furniture." Is this distinct from maybe more workaday or more functional furniture pieces? Who would have this in their house?

Mack: Well, you'd probably have to be established middle class before you could afford things like this. We know that Anthony Hay was selling furniture to masters of other trade shops in town, but they're certainly above average people. So an intermediate market would be served by joiners who trim houses while out in the countryside beyond population concentration, those are your best woodworkers and they do furniture along with their house interior: windows, doors, stairways, paneled walls.

There's still quite finished woodworkers, but usually working on a heavier scale than cabinet makers. There's also a certain influx from turners who spin pieces of wood in lathes and then just drill holes and plug one turn part into another. That's a different level of furniture and there's a good bit of that coming down from the northern colonies to serve the secondary market or background rooms.

Harmony: The cabinetmaker works with wood, which is obviously an organic material that responds to changes in climate. I'm thinking about what kind of concessions or allowances you have to make for wood in a time when we don't have climate-controlled rooms. What kind of differences do you see or adaptations do you see with Virginia furniture?

Mack: Well, actually, Virginia pieces are using many of the very best London practices for accommodating these very things you're considering. England is a fairly humid climate. Maybe more consistently so than here. About a third of the high style furniture was imported from England and those pieces are going to go through acclimatization and acclamation to our environment and need some maintenance after a period of adjustment.

Our pieces are going to go through the same thing as the Hay shops sits in a very damp place. The bottom of that drainage area is going to be a pretty humid place. We're making things that are going to be shipped inland to country estates.

The things in town we would be able to get to and maintain fairly readily, but building things that will shrink and swell with some predictability, building in flexibility, the gelatin glues have a certain elasticity to them so you can kind of build an expansion to the pieces.

It's something that they did put a great deal of thought into and there were some very clever solutions to the problems. Many of the regional centers in colonial America are continuing practices which are coming out of the joiners' backgrounds.

Harmony: We know that a lot of the colonies develop a distinct furniture style so that when someone evaluates it today they can say "that's Boston, that's Pennsylvania." What is distinct about Virginia style furniture? What are the hallmarks of the Virginia style?

Mack: Well, some of it would be this use of the most thoughtful London techniques. I think I mentioned about a third of the high style furniture is coming from Britain. Well that sets a kind of mid-level London standard in this area, so we have these expansion joints and special applications for blocking up bracket feet so you get sympathetic movement for the reinforcing blocks inside the face of a foot. That's not something you see much around the rest of the colony Ã¢â‚¬“ some, but those construction techniques.

And a very, I guess, conservative bent towards ornamentation. Our things can be almost dry, kind of academic in kind of following the "plain but neat" kind of mantra that planters and writers in the 18th century suggest they prefer. We do see ornamented pieces, but they tend to be things used for ceremonial or entertaining guests at tea as a formal social activity so tea tables are our most ornamented and kind of distinguished pieces probably for household things here. So I think the Virginia things are some of the most progressive pieces kind of from a technical aspect, but kind of very restrained kind of in an artistic sense.

Harmony: When modern Virginians or anybody who visits come into your cabinetmaker's shop today, I wonder what kind of tools you use that they might recognize and, conversely, what tools that you have in use which are no longer in use today's woodworkers shop? What's different about tools now and then?

Mack: Gosh, I think most of the tools we use would be recognizable to, certainly, the general public. A hand saw is a pretty familiar item; lots of small chisels. A line to help dimension pieces and cutting into width, cutting into length.

Most modern builders are, of course, not working solely by manpower as we tend to, but most of the new inventions for dimensioning lumber and cutting lumber were made in the early 19th century and many small hobbyists do have shops equipped with table saws, and joiners, and planers, and band saws. It really makes modern woodworking quite a different exercise. Although, wood is a raw material, and wood is still wood so the final product, the engineering and wood's malleability, and all those things have not changed at all.

So, in the long run there are just lots of different ways to get to the same place. And even with hand tools, different 18th century workmen would buy specialized equipment to try to develop an advantage in a particular area. I guess people have always had their preferences in different ways of doing things, but that kind applies to the hand tool world as well as the machine world.

Harmony: Mack, thank you so much for being our guest today, and we hope that everybody listening will make a trip by your shop on their next visit.

Mack: Thank you for having me.

in Trades & Technology | No comments