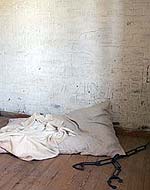 Doctors treating madness in 1773 embraced methods like bleeding, vomiting, restraint and intimidation. Interpreter Donna Wolf researched the topic for her program, “A Method for Madness.”

Harmony Hunter: Hi, welcome to the podcast. I'm Harmony Hunter. America's history with mental illness has its roots in colonial Virginia. It was here in 1773 that the first patient was admitted to the Hospital for Persons of Insane and Disordered Minds.

Actor-interpreter Donna Wolfe has begun a study of the institution and its efforts for a program called "A Method for Madness." Donna, thank you for being here today.

Harmony: Well, I think a lot of people associate colonial Virginia with the Revolution, but not necessarily a revolution in mental healthcare, but this is the first public institution for treatment of insane people.

Donna: That's true. Prior to, it has always been they were always on the sidelines of the other hospitals. This is the first hospital strictly devoted to those of the disordered mind.

Harmony: What is the institution called, when it is established?

Donna: The institution is actually The Public Hospital is how it's listed in all the records and whatnot and it was officially opened in 1773.

Harmony: How are we caring for mentally ill people before there's a public institution?

What they would do though, is they would place the mentally disordered in an area specific to them, usually in the cellar and there they tried to treat them. It is a hard word to use, because really insanity and curing insane persons is a new concept for the 18th century. And then when the hospital here opened, they would bring them in from the countryside to put them to the hospital.

It is actually documented that if there were persons of the disordered or the lunatic as they were called, a lot of times they were left to just languish wherever they were. It sounds horrible, but they just wandered, wandered about the Virginia colony.

Harmony: So when the Public Hospital opens its doors, what are the goals for treatment and cure, and care?

Donna: It was very specific in the resolutions that nobody would be allowed into the hospital unless they could be cured, or at the very least, were too violent to be allowed into civilized society, you see. So the goal for treatment was really to take them back to the right path of sanity. Insanity was a choice.

You chose to be insane and so in order to treat the insane you had to take them to the right choice. When they were trying to find other reasons for it, such as they thought perhaps lesions on the brain or ulcers or bad blood and such, but that was always the last recourse. The first step in treating the insane in the 18th century was to help them make the right choice.

Harmony: How are they trying to help people make the choice to become sane?

Donna: Well, if they felt that it was a person's choice, lets say, Dr. de Sequeira, he was the first attending physician of the Public Hospital. He used methods of intimidation, fear. He wanted to inspire fear and awe in the patient and this is not just Dr. de Sequeira's concept, this is sort of emanating through the medical community at this point.

So one of the first things they wrote about what to do with the insane person is, when you entered the cell you make them have eye contact with you. You make them become in fear of you and you want to become sane in order to please the doctor, you see, and it's not using cruelty or beating them back into the sanity, but the intimidation factor. "I am the doctor, I know what I wish for you to do and you will please me by choosing sanity."

Harmony: There are also physical and medical treatments that are just as frightening as an imposing doctor.

Donna: This is a very sticky wicket, if you want to call it that way because what we look at now 260-odd years later we think of this as cruelty. They thought their methods were humane. When you say methods of bringing them back to the right choice, physically such as bleeding, bleeding the patient, cold water baths, manacles, and shackles, a straight waistcoat, which is what we know as the straightjacket now.

Things like blistering salves, a type of balm I suppose you could say you would put on the skin and it would raise blisters to draw the poison out. What's called cupping where you heat a small glass object, you then place it on the skin and it draws a blister, a welt and that is drawing poison out of the body.

Vomiting was considered highly, highly effective. What they didn't realize is that some of the compounds they used for vomiting: turpentine, magnesium sulfate, charcoal, rattlesnake root. These are very poisonous items that we know today, but they used it.

Harmony: What kind of success did they have? Do we see patients being released and considered cured?

Donna: We do have patients that are released. They are called cured. They thing is that sometime they came back. They were not cured. And sometimes, particularly at these later half years of the Revolution they just disappear so we don't know. We really don't know. What the hospital is designed to do, as I said earlier, the doors were open only if you could be cured.

Now, part of the way the laws were written for the hospital, and this is by the House of Burgess members, the Magistrates who I said are on the Court of Directors, it was decided that if a patient was cured or considered a lost cause, when they were released they were not released back to the family. They felt that the family fed into the insanity or caused the insanity so they had to be released to someone else -- a friend of the family's, high official in a county court let's say, and they had to place a bond for the patient. We don't know really if they were actually cured or what we could call being cured.

Harmony: It seems like such a mixed bag. When you're researching this it seems like a lot of these treatments, when we look at them now, it seems sort of backwards or barbaric. But on the other hand this is the first attempt that we're making at creating an institution for the mentally ill and treating these people more humanely. What's the balance there between the treatments that they are trying and the fact that they're doing their best?

Donna: It's actually more the philosophy. If you want to go back to that word because prior to the 18th century, the insane were no better than animals. So in our hospital here and they're trying to see them as human beings and trying to cure a disease like they would anything else. They're really trying to humanize them again I suppose.

And even though we see some of these treatments as barbaric and whatnot because they were getting successes from these treatments they saw it as "oh, this works. This works all the way across the board so we're going to treat every person like this." Not understanding that no, this each individual has an individual problem. So I suppose you could say, "is that a balance?" That one's a hard one to answer because they really thought they had found the answer. They really did.

Harmony: When we look at modern care of the mentally ill do you think 200 years from now we're going to look back and they're going to think we were barbaric?

Donna: That is actually what really got me thinking about this program some years ago. As I was going through the books and the documentation I was sitting there going "Gosh, how barbaric they were back in the 18th century," feeling superior of course in my 21st century mind until one night I was watching TV and I realized we're no better. We have all the pills to cure whatever ails you.

We have this and that and everything else and it was in a very odd way almost identical to what they were selling on the streets in the 18th century. So do I think that they're going to look at us in 260 years and look at the 21st century and go "oh, dear God what were they thinking?" Yes. Yes.

Harmony: Donna, thank you so much for being our guest today.

Donna: Thank you. Thank you, Harmony. Thank you for having me.