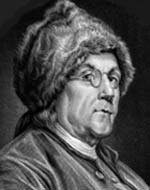 Harmony Hunter: Hi. Welcome to the podcast. I'm Harmony Hunter. Benjamin Franklin did so much in his life that it's hard to describe him with just one title. He was a printer, writer, inventor and diplomat.

Colonial Williamsburg performer John Hamant portrays Benjamin Franklin in the Electronic Field Trip, A More Perfect Union, and he's our guest on the show today. John, thank you for being here today.

Harmony: Well, I was reading about Benjamin Franklin and historian Gordon Wood thinks that Benjamin Franklin is one of the most relatable of the founding fathers because he exemplifies this American spirit of kind of coming out of nothing and pulling yourself up by the bootstraps and really making a name for yourself. As you study to perform the character of Franklin, do you find that he's relatable for that reason?

John: Absolutely. Franklin was the quintessential common man, and all of his efforts went toward the betterment of the common man. His background, having been born the 15th of 17 children of his father, with no virtual prospects before him. He began in the printing trade apprenticed to his brother James and he took to that. His father, of course, was a chandler and his father tried to apprentice him as a cutler, but neither of those really intrigued him.

But this entry into the world of words and ideas that was afforded by entering the printing trade really brought him to the fore and he became voracious in his reading and his writing and his learning to turn a phrase and by being industrious, by being frugal, all of which are part of his 12 virtues that he came up with. Of course, a friend of his said, "You probably want to add one more," which is modesty, which he always had a difficult time with.

Yes, he brought himself up. He improved his business. He was a very good businessman. A very honest businessman and was able to retire from printing at the age of 41 to explore other areas that he had interest in. These included some of his inventions and then becoming a diplomat and one who some people termed him a philosopher and a sage. So, yes, this is an example of, perhaps the best example and the earliest example, of the opportunity of America.

Harmony: He's so clever, and he has such a sort of subversive wit that he almost makes it look easy, the success that he had. But you have to think, he's very low-born and he comes from a society where there's not really such thing as a self-made man. You know, the class structure is very stratified and it's hard to jump. He never stops working.

He wanted to understand, because he was intrigued by it. Not because he saw it as a center of profit or fame or really anything else that would be a personal boon or benefit, but simply because he had an interest in it. The interest was extended by his firm belief that the best way to serve our Creator is to benefit your fellow man.

His philanthropy, with all of his inventions, it didn't matter if it was the stove or the lightning rod or the flexible catheter or any number of things, he was chided for not having patented these. And he said, "I never wanted to patent them, because I look back at all the inventions which were never patented, which make our lives so wonderful and we have benefited by those inventions and I think mankind should benefit by whatever I happen to come up with."

Harmony: So even before Franklin enters politics he's very civic-minded. All of his inventions go toward public safety and public betterment and public health. The comfort in the home, the Franklin stove makes everybody warm. The lightning rod is a huge advancement for preventing fires in your house. Does he start the first lending library?

John: He did. This came out of, really, the group that he formed with some friends called the Junto. This group got together and they were socially friends, but they were also men of inquisitive mind. So the members of the Junto got together and they decided to consolidate their libraries into one library and then made that available first to the members of the group, but then extended that to others who would become members of the library by subscription and, of course, the monies from those subscriptions would be put to purchasing other books.

Harmony: We said that in Franklin's life he starts out born to a very working class family, his father's a chandler, or a candle maker, then he apprentices to his brother as a printer and it's here as in his work as a printer, I think, that he hones his skills as a writer and as a satirist. Then he moves on to a career in invention and eventually he gets into diplomacy. At what point has he finally arrived as a gentleman and a player on the diplomatic scene?

John: I think if you had asked Franklin if he was a gentleman in the context of that period, with the stratification of society as it was, he might be hesitant to accept that term. He saw himself, as I said, as the common man and that was the way he presented himself. His common speech, his, as they called it, Quaker dress, none of the silks and finery and all of that, his Martin fur cap that he wore.

He studiously presented himself as the common man, not as the aristocrat, not as the gentleman, not as the top 2 percent of society, which of course he could have been a part of had he wished to be. He could have taken on all the trappings and the fancy coaches and the gold braid on his clothing, but he chose not to.

His notoriety, I think, came largely from the work that was done in the Congress and putting together the Declaration of Independence. That's where his colleagues saw him as a man of common sense, as a philosopher as one who could reach a reasonable compromise, which is something that he always, always worked toward with regard to not only getting things done, but also for civil discourse. Not this rancorous name-calling and blowing up of discussions by insults.

Harmony: We're so dismayed today when we see this happening in our Congress, this state of discourse as it is. Franklin was just as horrified when he saw the first meeting of Congress where they couldn't agree and they brought their own prejudices and their own agendas.

John: Absolutely. People don't realize today, or perhaps some do, this was the magic that was achieved not only in the Congress in establishing our call for independence, but also later in the Constitutional Convention that these men with different ideas and different agendas and different regional prejudices were able to come together and for a brief time set those aside and concentrate on the common good. And that, I think, is something that is woefully missing in our society today.

Harmony: Franklin makes a speech about that and I hope you'll read a little bit for us today, but it captures that spirit of compromise, saying we've got to make a compromise for the sake of progress.

The small states, of course, wanted equal representation from each state, which would put Delaware on the same level as Virginia. The large states wanted this done by population and, of course, would give them more representatives than the smaller states.

So, what Franklin, listening to this debate finally came up with was, "You know, when a cabinetmaker makes a table out of two large planks and he puts the planks together and they don't exactly fit, he then takes a small bit off of each one so that they will fit together exactly. That is what we must do, gentlemen. We must abandon the small bit of our ideas so that we may unite the whole." And then he made the proposal that there be a second house, which eventually became the Senate in which there would be equal representation of the states as opposed to the House of Representatives which is done by population.

Harmony: So Franklin actually didn't make speeches at the Constitutional Convention. But this, if you'll read for us, a little bit of the speech that he made before the ratification of the Constitution.

John: I would be happy to.

"I agree to this Constitution with all its faults, if they are such, because I think a general government is necessary for us and there is no form of government but what may be a blessing to the people if well administered. I doubt too whether any other convention we can obtain may be able to make a better constitution. Thus, I consent to this Constitution because I expect no better and because I'm not sure that it is not the best."

Harmony: What did Franklin understand that nobody else did?

John: I think he understood that we are a society. We are a community regardless of our size. That our only success will be through public and private virtue that we have the recognition that government is our servant, not our master, and that it is there to help us when we need its assistance. I think he realized that the only way we will survive is if we work together. If we abandon this idea that those of differing opinion are somehow enemies, but simply gentlemen who see things differently. And in talking back and forth about the various ideas and in discussing them then eventually compromise takes us closer to the pure truth.

Harmony: John, thank you so much for being our guest today.