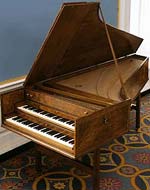 Harmony: Well, I've said that you have to sometimes make a difficult decision between restoring, preserving and conserving. Can you talk to me about how those three words that seem almost like synonyms, how are those three really different approaches to handling old instruments?

Because conservation is maybe interested in putting the thing back in a past form in order for it to exhibit better, for example, or in the case of a functional music instrument to make it playable, but a conservator is much more interested in also preserving historical evidence.

Harmony: Does this paradox of conservation versus restoration present itself in a unique way when you're talking about musical instruments?

John: It really does. Musical instruments have a long tradition of being restored. Historic ones being kept in playing condition. Most of the time when you listen to a major symphony orchestra, a good many of the string players are going to be playing violins that are one, two, or even three hundred years old. So there's a long tradition there.

Musical instruments have something not only for the eye, but for something for the ear. So to leave an instrument unrestored is to leave that major part of its aesthetic message unobservable. The problem is, restoration also has a destructive aspect. Anytime we handle a historic object, and certainly when we intervene and restore it, make actual changes to it to make it look better or sound better.

Harmony: Before I had done this research I would have thought that restoring an instrument to playing condition would have been the top thing you can do, restoring its voice, but you've actually made the point that you can, kind of, reduce an instrument to sort of an imposter of itself, because by the time you replace its guts you've lost so much of the signs of wear, the tool marks.

What other types of things are we learning from an ancient instrument when we look at it as a text, as an historical document?

John: We live in an interesting time right now, because whether it's a crime scene or a museum object, we now know that closer you look at physical evidence the more you can piece together details about something that happened in the past. So we've really learned to respect that physical evidence.

You're right. You know, we all thought that you should restore old musical instruments. Thirty years ago most museums thought that if they had the money and the wherewithal to do so that they should restore all their musical instruments to playing condition, but we've learned gradually over the last twenty or thirty years that there's a lot that can be lost actually in restoring an instrument and sometimes the best thing you can do is leave it unrestored.

John: Well, almost always, to some degree, that is the case. It's very unusual to have an object come in to the Conservation Lab that hasn't had some fairly intrusive restoration in the past and we always hope for the least possible past restoration because almost always that restoration is not very well-informed.

Very often evidence has been lost in the way that was done. But, you know, there's a kind of amnesty. These things are still important. They may have lost a little bit of their story, but there's still some story left there to be preserved. So, we always do what we can to identify what's historical evidence, distinguish that from what you might call counterfeit evidence that was put there by a restorer and preserve the important parts.

Harmony: You've talked about evidence in a broad sense. What sort of concrete examples, what actual types of evidence are you able to see or might have been obscured?

John: Well, my main specialty even within musical instruments is keyboard instruments; harpsichords, early pianos, clavichords, organs. Most people might not realize this, but a piano made in the 1790s is made of wood, sure, but it also has iron and brass and lots of leather and cloth in the mechanical parts in order to cushion the wood against wood and wood against metal moving parts so it doesn't make noise. It just makes music.

But anyway, leather, you can imagine what 200 or 300 year old leather, how durable it's going to be. It's not. And so restoration always of an instrument that old always involves replacement of leather, replacement of the cloth elements because there's always insect damage and replacement of old strings.

Very old strings always have enough corrosion on them so that even if they survive at all if you try to bring up the tension and tune the instrument they would just break. So, at the minimum a restoration involves replacing all those parts. For that reason, if an instrument survives and comes into our collection and it's escaped past restorations and it still has those parts we won't restore it. We'll stabilize it in its current state and if it's important enough, and some day it will be.

But if some were already important enough, we'll make a reproduction of it and that way we can play the reproduction and hear what the original sounded like without any kind of restorative changes to the original. And that's the best of all worlds to have the original untouched and have an accurate copy.

Harmony: Can you be sure that your restoration is as true a sound as you would hope it would be if you had restored the antique instrument?

John: That's a terrific question and, no, we don't know. However, we know that musical instruments do vary in sound from one to the next. Even if one maker were to make two instruments, identical side by side using wood from the same trees, there not going to sound exactly the same.

So, if we can copy an instrument closely enough my feeling is, no, we can't say that it sounds just like the original did but we can say that it almost certainly is within the corral. It's close enough that the original maker would recognize it.

Now, I could turn that question around another way and that is, "If we restore the original instrument back to good playing condition, will it sound the way it did when it was new?" It's now 200 years old and it almost certainly sounds different so in some ways, for all we know, making an accurate reproduction may sound more like the original did when it was new than the original ever can be again.

John: That's another great question and it's something that I think people who are in the restoration sphere, doing conventional restoration, will make that point and its appropriate and in some cases it may very well be the case. but let's think about what happens when an artifact comes into a museum and it becomes maybe for the first time in its history it's designated as a historical artifact and it's now changing its role. It started out as someone's family piano for young Anna to learn piano in the early 1800's, but it's not that anymore. Now it's something different.

This is an artifact that exists to be a mentor to us, to tell us about the past and for us to impose our changes on it and to change the wear patterns on the ivory in our own use is to not allow it to change its role.

I sometimes think of all of this in terms of a sports metaphor. If you imagine a star quarterback who's the best of the best except he's 65 years old now. He was always meant to be a football person. Does that mean we have to have him out on the field or can his role, what he means to society, can it change as he grows older? Maybe he should be a coach. Maybe he should write a book. Maybe he should inspire young athletes. And the same thing happens really with artifacts, or can, and that's the way we think of the musical instruments.

Harmony: If you're thinking about a private collector of old instruments or a museum, what's the most important thing you would like to impart about treating and conserving and stabilizing those instruments?

So I think it's important to realize that we...we're responsible for whatever historical content, content of information, documentary content of this artifact it has, when it comes into our possession. We really should feel, I think, some obligation to pass it to the next generation without it losing much of that information and now that we know the information is in the form of physical evidence in old surfaces, wear patterns and so forth that has real implications for how we should care for them. There will be methods that future scientists will come up with for reading historical evidence in objects that we can't even imagine.

Harmony: John, thank you so much for coming by today. It's been a fascinating conversation.

John: Well, it's my pleasure. Thank you very much.