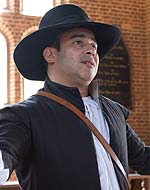 Harmony Hunter: Hi, welcome to the podcast. I'm Harmony Hunter. We have a spy story today for you on the podcast. Our guest, Miguel Girona, has joined us today to tell us the story of Don Diego de Molina, the Spanish spy. Miguel, thank you for being here.

Miguel Girona: Thank you for having me.

Harmony: This is a century prior to the time period that we usually discuss in Colonial Williamsburg. What else is happening during this time period?

Miguel: Well, during this time period you have the English colony, which is fairly young, but they're also going through a lot of difficulty. No one's really farming. No one's really doing a whole lot with the colony and, unfortunately, due to that, we're having a high mortality rate.

Harmony: This story is set in 1611. The Jamestown colony is just established in 1607 and as you said they were really struggling to stay alive and keep just a few men on the ground down there. And also there's a lot of competition in colonization in the Americas at the time. England was not the first party on the scene in attempting to colonize North America.

Miguel: No, no. There were many countries interested in the new lands and the Spanish were one of them. They were more in the southern regions. Ironically enough the Spanish, some in the Spanish government still held the position that the English were usurpers considering that Columbus had been here in 1492.

Harmony: I said this was going to be a spy story. We better get to the spy. There's a character you've been portraying at Historic Jamestown. Don Diego de Molina. And he comes on the scene in 1611. Tell me about who this person is, and what he's here to do.

Miguel: Don Diego de Molina arrived, as you said, in 1611. Then he disembarked and he and two other individuals were on the beach. They were immediately surrounded by English soldiers, and the ship left. So he became captured.

Now he, of course, would have maintained that he was just there as a stopping point on their way to their colonies, but it was maintained that he was a spy searching for what information he could bring back to Spain just as a checkup. After his capture he spent approximately, I think, three or four years there and during which time, in 1613, he wrote a letter back to his government.

Actually he wrote the letter to the ambassador to England, a Don Alonzo de Valesco. In that letter he outlines how weak the colony is, how the spirits of the people are broken and how the Spanish government should sweep in now, immediately, yesterday, as soon as possible to quell or, in his words, to kill the hydra that is growing.

Miguel: In his letter he encourages the Spanish government due to a couple of factors. He is under the impression that there are rich silver and gold mines in the area that the Indians are aware of, but they don't mine them because the only precious metal they care about is copper. So, he realizes there are untapped resources.

He also quotes the state of the people in that they would welcome a savior. He also quotes the bringing them back to the one true religion, which was Spain's calling card. They were the champion of the one true religion or Catholicism. So he quotes those things and then he also talks about the fortifications; how they are poorly built or built by unskilled men. Their soldiers are not drilled. They are also unmotivated and in disrepair. The entire area.

So, if the ships of Spain were to arrive they wouldÃ¢â‚¬Â¦if there was resistance, it would be very, very minimal and for the most part they would be welcomed as saviors.

Harmony: This is a lot of intelligence for him to be delivering back to Spain. How does he sneak it from his jail cell back across the ocean?

Miguel: It was one letter. One letter that was actually hidden in the sole of a shoe of a gentleman that was traveling back due to medical reasons to England.

Harmony: Were his observations correct? Do you think if Spain had swept in at that time with the force that Don Diego suggests, could Spain have taken back the colony? Was he right?

Miguel: To some extent, yes. His geographic observations were a little off. He would say "this was 20 leagues from there" when it was indeed about 200 yards. Apparently his skills at measurement were not very good, but, yes, initially the Spanish would be able to come in and take over a large area, a large section. But there also were, first of all, Native Americans that were in the area and not happy with the colonization. So there would be attacks.

There was also the Virginia Company, which kept merchant vessels and those were armed. So the idea that they would be able to hold that area is something of a question. They could come in. They would be welcomed by many because they would, of course, bring those supplies and the fresh food, but it would not be smooth sailing after that.

Harmony: So he might have been right about the political situation, but we know now that he was wrong about the mines. There are not gold and silver mines in Tidewater Virginia, but this was a common misconception at the time.

Miguel: It was mostly hearsay. He talked about how the Native Americans would show or talk about grains of sand or shiny grains and it could have been fool's gold. I have no idea, but the idea was that there was word, there was hearsay, and the purpose of coming to the New World was to find these golds and these riches and these untapped resources. So, I think it was more wishful thinking than anything else. He saw a bit of evidence and extrapolated everything else.

Harmony: He was imprisoned for four years. What was that like for him?

Miguel: He speaks of lack of food, but that was not so much the prison as it was the entire area. He talks about being treated with respect, but having not being able to change his shirt for a month. So he deemed himself dressed in rags, which was as good as being naked.

The fear for his own health; he was unhealthy or ill for a long period of time and at the time of his letter, which was written in 1613, he was just regaining his health, at which point one of his companions had already died. So, it was dirty, it was unhealthy, food was scarce and it was cold. He described it as very cold.

Harmony: What a patriot this guy was, for Spain. Obviously not a patriot in the sense of the word that we usually use it. What do you reflect about the force of his personality and what the service he tried to do, and did do, for Spain?

Miguel: He was very dedicated. In his letter mentions the church, his loyalty to his religion, which is in line with the Spanish philosophy. That being the case, I really wanted to press forward his devotion of God, crown, country. So, those were the three main beliefs that he held and he held dear to them. It's probably the only thing that got him through.

So, in that, when I portray the character he was first, insulted by the fact that he was being held because he maintained his status as not a spy. Secondly, he was looking to educate these people. He could not see how they could remain loyal to the crown of England when England had done so many things wrong, to his mind, of course.

With the Reformation, with the leaving of the Catholic faith and also the way they treated this colony. So those are the things that confused him as to why they would not raise arms or welcome him as a hero, I suppose.

Harmony: You've mentioned the letter as the backbone of the Don Diego de Molina story and we've hardly talked about it. It's actually a very lengthy letter. What does he do in this letter?

Miguel: He's very formal. Everything has this formality of it and hence his being a gentleman, but he basically introduces the deliverer of the letter and calls him a man in whom you can have confidence. He describes his situation and how he accepts that and understands completely why he's not been rescued.

Because there's lack of information and obviously we want to be careful how we approach this. He then goes into how we must as Spaniards stop the growth of this hydra, and he calls it a hydra, because the intent he says of which is to bring more and more people here and his great, great point is piracy, which was one of the biggest things that the Spanish government accused England of.

So, he goes into that and then he starts describing, section by section, the land. How it's exposed, its weaknesses. He describes the fortifications as boards so thin that a kick would break them. He talks about how the entire area is ripe for the right type of governing and how if Spain were to come here they would reap rewards and also stop England.

Harmony: Thinking about this period in time in the colonization of America, I think today, you know, the fact that we're American and that we're here is such a given and we're such a strong presence that it's hard to imagine that there ever was a time when the grip was so tenuous.

Miguel: That is exactly right. Anything could have happened. One bad crop, one plague, one successful crop, any one of these seemingly insignificant moments could have dramatically changed what we are today and how we live our lives. Having my family originally coming from Spain, of course, I'm very, very enamored with the Spanish culture, but I am very grateful that it turned out the way it did.

What we represent as America is truly, or in at least our philosophies, truly an acceptance of as much as we can. We want to bring in the best of everything that we can so that we can grow from it, learn from it and then be better for it.

Harmony: Miguel, thank you so much for being our guest today and sharing this story with us and we hope that everybody gets down to Jamestown Island and learns more about the story of early American colonization.