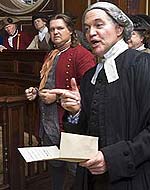 The Constitution guarantees the right to jury trial. What does it mean for a vital democracy? Director of the Center for Jury Studies Paula Hannaford-Agor explains their importance.

Harmony Hunter: Hi, welcome to the podcast. I'm Harmony Hunter. When the Constitution was ratified in 1787, there was significant debate over what rights should be committed to parchment. No small amount of thought went into which articles would be necessary to sustain a democratic republic.

The question was settled, in a way, with a Bill of Rights. One of the rights it specifically enumerates is the right to jury trial. It's guaranteed in the sixth and seventh amendments. What, then, is a jury? What is its function, and why did the founders think it was critical?

The podcast comes to you today from inside the Marshall-Wythe School of Law. We're joined by Paula Hannaford-Agor. She's the Director of the Center for Jury Studies and she's joined us today to help answer some of these questions. Paula, thank you for being here today.

Paula Hannaford-Agor: Thank you very much. It's a pleasure to be here.

Harmony: I want to think about the larger meaning of juries and their broader function in society, but before we get to too far ahead of ourselves I wanted to ask: what's the job of a jury in its basic sense? What is a jury called to do?

Paula: Well, a jury actually fulfills a number of different roles. Probably the biggest one that gets overlooked the most is, juries decide cases. These cases are filed in courts. They're either criminal trials where somebody's been accused of a crime, or civil trials involving some sort of dispute between private parties. The jury becomes the decision maker for who wins and who loses. So that's probably the most obvious, and because it's the most obvious it's the one that's not particularly controversial.

In criminal trials we think about juries as being sort of the bulwark against tyranny. Because they are independent they're brought from the community, usually just for just maybe that one trial or just a couple of trials in a row as opposed to being a paid judge. We think about the jury as legitimizing the law when jurors actually think about, especially in criminal trials, that this is a fair law and it's being fairly applied in this case. They're the conscience of the community.

Harmony: In a mechanical sense, what is a jury? It's twelve people gathered from the community?

Paula: Generally we think about a twelve-person jury, although many states actually have smaller juries, especially as few as six jurors in civil cases. You have to be an adult. You have to be a U.S. citizen. You have to be a resident of the community. A lot of states disqualify people who have been convicted of crimes. You have to be able to speak and understand English. So there are some qualifications there for who is eligible for jury service.

Harmony: I've made the logical leap of saying the fact that the founders specifically included the right to jury trial in the Constitution and the Bill of Rights -- when so many other rights were not specifically included -- I've made the leap of saying that this must mean that it was of special importance to them. Why would jury trial have been so important to the founding generation? What were they protecting future generations against?

Paula: For the founding fathers, criminal trials, which are actually not only in the Bill of Rights but they're actually in the original Constitution in Article III, are guaranteed. All crimes, with the exception of impeachment, shall be tried by jury. This was how society actually enforced morality. This was how the community actually came together and said, "This is how we expect people to behave."

They were also, of course, reacting to the amount of corruption of the royal bench. The royal governors who were appointing crown judges who could be very easily manipulated. The jury trial was very important to be able to be a check on the judiciary that they really didn't trust, because that could be so easily manipulated by the politics, by the crown in Great Britain.

The other one was that there were an awful lot of crimes in colonial America that the royal governors would essentially ship the people who were arrested and ship them back to England for trial. They weren't allowed to be tried here and so that was one of the big debates, and the reason why it was so important that they put it in is that it has to be trial by jury and not only has to be trial by jury but it has to be in the state where the crime occurred.

You couldn't take somebody, for example, who had committed a crime in North Carolina and try them up in Massachusetts because it was too important to the community that they be held accountable for their behavior. Or if, in fact, that community didn't think that it was a crime that whoever there was some sort of dispute about what the legitimacy of the law was that they should not be removed from that community in sort of a mock trial with a community that didn't share the same values.

I think it's important. Today we don't have that many trials, usually only about 2 percent of criminal cases end up going to trial today and probably less than 1 percent of civil trials. In colonial America and the early part of America, you know, late 18th century, everything went to trial. I mean there was no such thing as a plea bargain. There was no such thing as a settlement. It went to trial and it was tried by jury. So this was the way that the community decided cases that were actually brought into court.

Harmony: At Colonial Williamsburg we've been thinking about history as a sort of continuum of debates over core American values. It seems to me that the jury is kind of a microcosm of America. This is a tiny sample of America that gets to debate over the application of law, and as you say, the morality of law and the ethics of a community.

Paula: That premise is actually quite true. Alexis de Tocqueville, who wrote "Democracy in America," talked about the value of jury trial and especially the civil jury trial. This was the vehicle by which Americans learned how to govern themselves. What does it mean to be self-governing? What does it mean to think about the tradeoffs, issues that really are not black and white in most communities? There are various subtle shades of gray.

And so he talked about that this is the way that people learn to argue, learn to listen to one another, learn to weigh the competing arguments, the different types of interpretations. There has been some very interesting new research that's been done by John Gastil at the University of Washington working with a National Science Foundation grant called "The Jury and Democracy," where they actually looked at what is the impact of jury service on civic engagement. Are people who actually participate as jurors, are they better citizens? Lo and behold, they found out that de Tocqueville's premise was actually correct.

They collected tremendous amount of data on who had actually reported for service over a number of years and then compared it to their voting records before and after. They found that people who actually participated as trial jurors and deliberated to a verdict were 10 percent more likely to vote in subsequent elections than people who simply reported for jury service but weren't actually selected for a jury.

So, getting back to your original question "Have we lost something?" Yes, we've lost an important way of how do we talk to each other. This was one when people were regularly coming in for jury service and debating the merits of every single case, you learned how to talk with one another. Talk to one another. Listen to one another, debate, deliberate.

Now there certainly is a sense when we look at political discourse today that people are simply talking past each other and not really engaging with each other on the issues. I can't say it's just the loss of jury trial that's contributing to that, but certainly it's a factor that can't be discounted.

Harmony: We started out with the question of, "What is a jury and what is its job?" I'm not sure that we can answer that any more concisely at the end of this conversation than we did at the beginning, because it seems like it has a simple task of deciding a case, but it has a much larger task in our society of allowing us to be engaged citizens that perpetuate this experiment in democracy.

Paula: It is the quintessential mini-democracy. I think it's less important in most cases of what the actual decision is than the process that jurors go through amongst themselves of having or being forced especially by the unanimity requirements where those cases apply, being forced to listen to each other and engage with each other in concrete serious ways.

Harmony: Paula, thank you so much for being our guest today.

Paula: It was really my pleasure. Thank you.