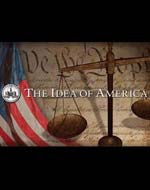 Democracy is an experiment sustained through debate; rights are a privilege earned through participation. Michael Hartoonian introduces The Idea of America.

Learn more: The Idea of America

Harmony Hunter: Hi, welcome to the podcast. I'm Harmony Hunter. Colonial Williamsburg restructures the study of history with a novel framework called The Idea of America.

It's an approach that makes connections among the enduring principles of our democracy using a framework known as The Great Debate.

Here with us now is Program Author Michael Hartoonian. Michael, thank you for being on the show today.

Harmony Hunter: Well this is a great big idea, and such a neat concept for studying and synthesizing history. What is the Idea of America? What is this plan?

Michael Hartoonian: The Idea of America simply starts with the definition of "What is America." And to me, it simply meant America is an idea, and it's an idea sustained through debate and argument. And the logical question that follows is, "Okay, then what's the argument about?"

In the study of history, particularly the fundamental values that drive us came from things like the Declaration, the Preamble, important speeches like the Gettysburg Address, Martin Luther King's "I Have a Dream," as well as many court cases. And what tends to happen over and over and over again is that certain values float to the top. But there was something intriguing about it, and the intriguing notion was that they were in conflict with one another.

For example, the republic starts in a debate over values, and the values there are law and ethics. What the American Revolution did was actually break the law. It broke the law for a higher ethical claim. And we see these things repeated over and over and over again.

The values that came to the surface in tension form were these four sets. Ethics and law conflicted, unity and diversity conflicted, freedom and equality conflicted, and commonwealth and private wealth conflicted. And the debate, then, about America is an attempt to balance those four sets.

The trouble is, of course, is that they are moving targets. Equality at one time in our history meant something quite different than it does today, as with freedom, commonwealth, private wealth, and so forth.

So in a democracy, we have to engage in a debate to move into a balance so that we don't disrupt the democracy.

Harmony Hunter: So all these virtues are tempered by one another to keep them from running away.

Michael Hartoonian: Yes, right, and if you pursue it far enough, you almost find that they're defined within one another. So it's an amazing truism to me that democracy is an argument. And America is an idea sustained by an argument. And the argument is, "How do we balance these four value tensions?"

Harmony Hunter: So you're talking about the importance of debate, and that there's something essentially American about debate. Even though every generation comes to a different answer in that debate, they solve the debate differently.

But you're seeing from the Revolution, to the Civil War, to Civil Rights issues, to present day, you can find that the core of all these great American conflicts, the same values that all Americans put on a pedestal and say we believe in private wealth, we believe in freedom, we believe in equality. And they're all being settled differently by each generation but it's a debate for you that continues.

Michael Hartoonian: Exactly, they're all there. Sometimes they're below the surface. Sometimes they skim right along it and all you need to do is see it. The problem is that if you don't understand your history, you can't see it.

Harmony Hunter: If you understand your history, are you better able then to understand the core values that are at the heart of America as a republic?

Michael Hartoonian: It sounds like a rhetorical question; the answer is yes. Americans for the most part don't necessarily like debates. They like things to be comfortable. It's like saying to you if you were my student, "Now, don't hassle me today, and I won't hassle you. And together, we'll make it through the day. Ignorant, but we'll make it through the day." Leaders, teachers, parents, have to hassle. It's not appropriate to say, "That's right, or that's wrong." It's more appropriate to say, "What's your evidence? How can you back up this claim you're making."

Harmony Hunter: What is the right way, then, to debate?

Michael Hartoonian: Well I think what Jefferson said, you have to develop rightful habits. And rightful habits mean, "I listen to you. I'm really listening to what you're saying. I understand that I can live with some kind of ambiguities in my mind. I know that commonwealth is good. I know that private wealth is also good. But I have to maintain an ambivalence. I can't be sure about that. I have to engage in the debate."

And the only way you can become better, as Jefferson said, was to gain an education. But not any education, an education that's dominated by these value tensions and dominated by the ability to argue, to debate in all of the civil and rigorous ways that that can happen. And it's a rightful habit that you develop.

Harmony Hunter: We've talked a couple times about the value tensions, and I think these are the values that are at the heart of the argument that you're making about how Americans keep their principles in balance with one another. So lets lay those out for folks. What are these value tensions, and why did you pair them up this way?

Michael Hartoonian: There are eight values in tension in four sets. The first one is freedom and equality. These are very powerful American values. We believe in freedom, but we also believe in equality. But they've been in tension throughout our history.

Harmony Hunter: Let's give some examples of that.

Michael Hartoonian: Well the one with the Civil War for example, free people, what good does it do if they're not equal? I suspect that you could have made the argument that women have always been free in this country, but it doesn't really do much in terms of the civic virtue if they're not equal in terms of being enfranchised. Freedom is good but it needs to be balanced by some set of equality. Otherwise, you don't have a democracy.

Harmony Hunter: So you said we have four pairs, what's the second?

But we need to understand, "I'm an American." That means something different. It includes the set called, "I'm a Virginian." I belong to a family, but I'm also different in terms of personally. So we have to be able to balance those things. How much diversity can we stomach? How much unity can we stomach?

A third tension is the one of common wealth and private wealth. This is really an intriguing thing. I define the commonwealth as infrastructure. There's the material things like the roads, and the water and the sewers and the schools, the things that we hold or own in common, the parks, the museums. Those are important things to have in any society, particularly a democracy.

On the other hand, we have to have private wealth. It's private wealth that sustains the commonwealth. But how much of each of these do you want?

Michael Hartoonian: The fourth value tension is the most complex I think, and it's the tension between law and ethics. Law is almost always based, if it's good law, it's based on an ethical framework.

Harmony Hunter: And it's not too hard to find examples of laws that we now look back on as unethical.

Michael Hartoonian: Exactly. We say, "How in the world could we do that?" It's a different time, it's a different context. But we have to carry those arguments forward and say, "Something fishy about that law, it interferes with my sense of what these ethical claims are.

Harmony Hunter: When we look at the study of history and we find these values in tension throughout the course of time, what is the benefit to us when we are able to line up an argument of the 18th century with an argument of the 21st century?

Michael Hartoonian: They illuminate who we are today and they take us up short and say, "Wait a minute, why did that happen? You study history to ask the question, "How come this happened?" Virtually every problem, issue, that confronts us today, they were confronted in different ways in the past.

We should study those, what did the people do then, and can we afford to do that again so we can bring those arguments to the present. Citizenship is about duty, responsibility, and particularly out of that reciprocal duty, I gain rights. Rights are never free. And that duty basically simply goes back to the question of Jefferson in life, liberty, and the pursuit of happiness. Happiness is a reciprocal duty. I'm happy to the extent that I do for others. Because the better off the others are, the better off I will be.

Harmony Hunter: And what's at stake? Why is it important that we embrace the duties of citizenship?

Michael Hartoonian: America is nothing but an experiment. It's an unfinished experiment. And if we decide not to participate in the experiment, somebody is going to take it over.

Patience, thoroughness, honesty, the ability to work hard, to listen carefully, and to be sensitive to what it means to be an American. And that's a big responsibility, but it's worth it.

Harmony Hunter: Thanks so much for being our guest today.