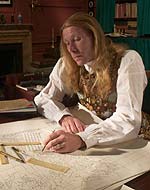 Early maps and prints leave geography for last, focusing first on politics and propaganda. Curator Margaret Pritchard talks about a new exhibit at the Art Museums of Colonial Williamsburg.

Harmony Hunter: Hi, welcome to the podcast. I'm Harmony Hunter. Today we think of maps as a neutral record of the landscape. But in the 17th and 18th centuries, they recorded a whole lot more than mountains, valleys, and rivers. Early American maps reveal the prejudices and agendas of the people who drew them.

Our guest today is Museum Curator Margaret Pritchard, who has put together a new exhibit at the Colonial Williamsburg Art Museums called "More than Meets the Eye: Maps and Prints of Early America." Margaret, thanks for coming by today.

Margaret Pritchard: Well thanks for having me.

Harmony Hunter: Tell us about the idea behind this exhibit. How would you introduce it?

Margaret Pritchard: All of the printed materials that were made during the 17th and 18th century carry far more information than meets the eye. Because people didn't have access to all of the media that we have today, when someone engraved a plate for printing either a map or a print, they included lots of information that really needs to be interpreted to understand what's going on in maps and prints.

Harmony Hunter: There are so many fewer sources of visual and written information that a map carries a lot more meaning.

Margaret Pritchard: Well there are fewer sources, but also, every little detail was put onto a map. For instance, the way that they chose to name different things, whether they chose to put an Indian name or an English name reflects whether they are trying to claim land.

Or what's equally as important is when they leave out information, because information is often left out for a specific purpose. They didn't want people to know about certain pieces of land, or places where they might think of establishing a colony.

The English, for instance, wouldn't want the Spanish to know what they were interested in and so they might leave off a particular site on an English map.

Harmony Hunter: This is an exhibit that's up right now in the DeWitt Wallace gallery. How did you choose what prints and maps you wanted to include?

Margaret Pritchard: I chose them based on the objects that I think conveyed more subliminal information. For instance, we have two maps made by Captain John Smith. One is of Virginia, right after he landed at Jamestown. And on that map, he included 166 Indian villages and named them all by name. He had a lot of help from the Indians working on that map.

Then he went back to England and then he came back to America seven years later and produced a map of the New England coast. And on that map, every single name is written in English. There's not one Native American site on that map.

When you really look at these two maps together, it shows that in that seven-year period, it shows that England's interest in America went from discovery and exploration to expansion and conquest. When you initially look at maps like this, you just are looking at the geography, but you don't understand what's behind, sometimes the motivation, in making these maps.

Harmony Hunter: And that's one of the categories of maps that you've divided the collection into at the museum is maps that reflect our relationship with Native Americans.

Margaret Pritchard: Exactly, and it's all part of the English tendency to want to control the environment. They did come over here, and they wanted to establish towns very much like the towns that were familiar to them in England.

But of course, native Americans didn't live that way at all, and the way that John White depicted that Native American town of Secota, it has a main street, and it has neatly planted rows of crops, and the Indians didn't regard land that way.

They regarded it in terms of its ecosystems. They had specific areas just set aside for gathering berries or for fishing or for planting certain crops and it wasn't organized neatly around the main street.

Harmony Hunter: You have another example of a Native American map, the Walking Purchase map, which has such a fascinating story behind it. I wonder if you'd tell us a little bit about that map.

Margaret Pritchard: Well, when William Penn was first granted Pennsylvania, he made an attempt to try to treat the natives fairly, and he tried to purchase land from them. Unfortunately, when he died, his sons were not as benevolent to the Indians, and some of the English settlers had already been migrating to some of the frontier lands, or some of the lands outside of Philadelphia, and specifically in Bucks County.

But unfortunately, what the Penns did was to literally hire three of the most athletic men in the colony who actually trained for this expedition. They actually also clear-cut a path and so when the time came to walk the line, they actually ran. The Indians thought that they were giving up a fairly small tract of land.

It was a very unfortunate thing ultimately for the English, because the natives were so upset about this, that they created a lot of problems for the English living on the frontier. And a lot of them allied with the French during the French and Indian War.

Margaret Pritchard: Penn's men totally cheated, and sadly, only one of them made it to the end of the line. And the Indians were so upset with him, that the year after the Walking Purchase was actually run, they went to his property and killed his wife and one of his children. The following year they killed another one. So he really never recovered from running the Walking Purchase.

Harmony Hunter: We have a lot more that we can learn from maps than our relationships with Native Americans and how those changed over time. You also have a category of maps that were used sort of as propaganda, or as tools to either send an inflated report back home, or try to entice people to immigrate.

Margaret Pritchard: Yes, well they are two very different things. For instance, when we get to the Revolutionary War, we have a wonderful map in the exhibit that really exhibits very outdated geography. In fact, the geography is just almost implied, the geography of Yorktown and Gloucester point.

Harmony Hunter: And in this map, the French want to make sure that their role is known.

Harmony Hunter: You have another example of a map that's being used to try to entice German population to immigrate.

Margaret Pritchard: Yes, that's a map that was actually printed in Germany but yet one of the first clues is that all of the place names are in English. One of the things that's so interesting about these maps is the importance of the decoration. On that map, the decoration assumes about a fourth of the map, and it's obvious when you look at what is depicted in the cartouche.

The cartouche is the decorative element that usually contains the title of the map and the map maker's name and often the date. But in this particular cartouche, you can see the wealthy English planter and he's seen sort at the summit of the design and he's surrounded by natives engaged in trade.

It's very obvious that the whole purpose of this map is reflected in the design of the cartouche, because it's an attempt to promote settlement to the land of wealth and opportunity.

Harmony Hunter: So we've talked about maps that show our relationship with natives and early English settlement goals, maps that show that there is some war propaganda where the French are trying to make sure that there part in the battle of Yorktown is understood, maps that encourage immigration.

What are some of the other categories of maps that we have?

Margaret Pritchard: Did we talk about maps to claim land? The first actual battles of the French and Indian War were on maps. As early as 1718, the French geographer to the French king, Guillaume Delisle created a map that actually restricted England's colonies to the eastern part of the Appalachian mountains. To document all of the French claims in America, what this cartographer did was to illustrate all of the routes of the early French explorers.

Well, the English were furious about this, because of course the English colonies had penetrated the Appalachian Mountains and the area west of the Appalachians was critical to the Indian trade. So they published a rebuttal map, and on the rebuttal map, there was an advertisement on the map that claimed all of the territories outlined in green are what is claimed by France.

So in this rebuttal map, the English again charted all of their explorations of the English explorers, again in an attempt to claim the land for the English. So the first battles of the French and Indian war actually appear on maps.

Harmony Hunter: It seems almost like, and correct me if I'm wrong, that the last and maybe even the least goal of these maps is to actually document geography.

You have to remember that most of the maps that are actually made of America during this time are made by people that never came here. So they're relying on bits and pieces of information sent back by surveyors and explorers and then they're sitting in England and compiling all of this into maps for printing.

The thing that I most took that people take away from this exhibit is never to look at an 18th century graphic at face value and to really look at every detail, every aspect of the decoration, every aspect of the nomenclature. What it looks like they've left off, what it looks like they're trying to promote. To try to understand the reasons why these things were made, because every single one of these was made with a specific purpose in mind.

Harmony Hunter: Margaret, thank you so much for being our guest today.

Harmony Hunter: And we hope that all our listeners come by and see this exhibit as well as all the great collections on display at the Art Museums of Colonial Williamsburg.

Margaret Pritchard: Well, that would be lovely.

in Archaeology & Conservation, Government | No comments