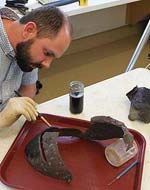 A broken helmet is discarded and forgotten, only to be resurrected 400 years later by curious archaeologists on Jamestown Island. Curator Michael Lavin describes the effort.

We're here in the lab with Senior Archaeological Conservator Michael Lavin. Michael, thanks for having us in your lab today.

Harmony Hunter: Well, sitting on the table here in front of us is quite an impressive artifact, an iron helmet. Tell us a little bit about what we're looking at here.

Harmony Hunter: Now I know I'm going to have my centuries wrong here, but just to help people visualize it, what this reminds me of is like a medieval helmet that a knight would wear. It's like the closed iron shield for the face fully covering the faceplate.

Michael Lavin: Very much so medieval looking. It has these very narrow eye slots and small piercings for vent holes and looks very medieval because it basically is.

Harmony Hunter: Well tell me where you found it and then what it was doing in Jamestown.

This is 2361E, and that particular layer had artifacts that relate more towards the teens when things were at a little bit easier with the natives and possibly why they were getting rid of some of their armor.

Harmony Hunter: You talked about layers and fill. For somebody who's not an archaeologist what does that suggest? Was this cellar a place where things were thrown away? Is it something where something was discarded?

Michael Lavin: Yes, this is trash layers, not occupation layers that we'd find at the very bottom of one of our particular features. So this is trash that was thrown away.

Harmony Hunter: Why is it trash?

Michael Lavin: Well again it's only a portion of this helmet and it's in a condition where you can see that it's been removed from the rest of the helmet. It's actually broken on the side there.

Harmony Hunter: The part that covers your face has been separated from the part that would have wrapped around the back of your head.

Michael Lavin: Yes, correct, and we don't know why they did that. But the colonists still would've been able to use just the helmet portion without the visor and the neck guard that we see here. And so maybe they just didn't really need the full close helmet part.

Harmony Hunter: What can you tell from the condition of the helmet now? Do you think that it was just an inconvenience? Is it clear to you that it was broken perhaps in battle or from disrepair?

Michael Lavin: No, it doesn't appear to be broken as in like battle or anything like that. It's possible, anythings possible, but the most logical reason for me, being in this condition is that it was purposefully removed from the rest of the helmet.

Obviously if it was intact with the rest of the helmet, it would be attached to it. And it looks like it's just been pried off. All the parts are there, it's misshapen slightly, but I don't see any reason why it would be of battle use or damage.

Harmony Hunter: I was talking to a co-worker about this helmet and she pointed out that the existence of a helmet suggests that someone was anticipating conflict. But then it's further suggestive that it was apparently thrown away. Maybe the conflict didn't come to be the way that they had expected?

Michael Lavin: That is very possible. At this time, if we're talking sixteen-teens, things were a little bit calmer, they've already established that they're going to be here. They've been here for maybe 10 years by this time period and they aren't leaving, and then this is also pre-1622.

Michael Lavin: We have found adaptations in their armor. They cut up armor to make jack of plate, or where they would sew a bunch of individual plates of armor together to make almost like flak jacket, and they found that much better against the native arrows than the sheet armor, the stone arrow would glance off and continue. Whereas the cut up armor sewn into a jacket would actually capture the arrow. So we have found modified armor that's unique to this type of conflict.

Harmony Hunter: So lets get back to the dirt in the cellar. This artifact sees light and air for the first time in maybe 400 years and your tasked with conserving it and stabilizing it, how do you take care of an artifact like that that has been so sealed up for so long?

Michael Lavin: Well the first encounter I had with this object was in the field. I was called out to take a look at this lumpy, rusty, curved object that no one could tell what it was. The first part was to get it out actually in one piece. So we took it out in block, brought it back into the lab, and excavated it out a point that it was stable enough that we could take it to Colonial Williamsburg and Emily Williams helped us by doing an x-ray of this artifact.

As soon as we developed the film and hung it up, we had this face staring at us and it was kind of a eureka moment because we didn't really know what it was. We conjectured that it was armor, but we didn't know what part of the armor suit it was. So it was really neat to see this face looking at you for the first time in 400 years.

Harmony Hunter: It's hard to imagine that it would have been unrecognizable because looking at it here on the table, it's so clearly a helmet. What happened to it in the ground that disfigured it so much, or just disguised it so much?

Michael Lavin: The rust process, the oxidation process, it kind of swells out and swallows up all the dirt and sand particles that are around it. So on all sides, this helmet had about an inch of obscuring dirt and rust and we use mechanical cleaning processes to take those away to reveal what's really left underneath.

Harmony Hunter: Is that layer of rust in any way protective of the artifact underneath it?

Harmony Hunter: So what was your first step after the x-ray?

Michael Lavin: I took it in to our air abrasion room and we use basically like a miniature sand blaster that under air pressure shoots out in a very fine cone aluminum oxide powder. And we can blow away that rust and stop at that black magnetite layer.

After we've mechanically cleaned the object down to that original surface layer, we have to chemically stabilize it. So we have to reduce its corrosion potential. And oxygen in combination with the water vapor and the air and chloride, ions will form a galvanic cell, which is rust.

So by reducing the amount of chlorides and then also keeping this after it's conserved in a dry environment, we greatly reduce the corrosion potential for the object.

Harmony Hunter: You never think about how much chemistry is involved in archeology, but there are a lot of chemical recipes you have to know.

You do it again and again and again until you get sustained soaks of under about four parts per million chlorides of soluble chlorides in that de-ionized water. So that process can take a very long time because you are doing passive soaks. For this particular helmet it took about nine months.

Harmony Hunter: Have you learned anything from the conservation of this artifact that you will carry towards the restoration of other similar ones?

Michael Lavin: Patience, this one took a very long time and it doesn't look like it now, but it was in many pieces. It was a difficult item to do, so, patience.

Harmony Hunter: Eventually this artifact, but currently hundreds of artifacts are on display here in Jamestown Island in the Archaearium.

Harmony Hunter: When and where can people come visit that museum?

Michael Lavin: On the island at Historic Jamestowne in our museum which is called the Archaearium.

Harmony Hunter: Great, thanks so much for having us here in the lab today, it's been fascinating.