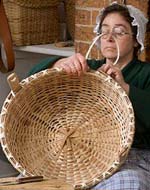 Basketmaking is a tradition born of utility and preserved for beauty. Colonial Williamsburg basketmaker Terry Thon practices a trade passed down through generations.

Harmony Hunter: Hi, welcome to the podcast. I'm Harmony Hunter. If you were a colonist in Virginia and you needed to carry something, chances were you would be using a basket to do it. Most families made their own baskets, passing the skill down from one generation to the next.

Basketmaker Terry Thon is our guest today, and she's stopped by to talk to us about the trade she's spent years mastering. Terry, thanks for being here today.

Terry Thon: Thank you, it's very nice to have been invited.

Harmony Hunter: Well, tell us who you are and what you do here.

Terry Thon: My name is Terry Thon, I am a basketmaker here at Colonial Williamsburg. We like to talk about basketmaking here today because we believe it's a skill that most people would have understood and would have needed in the colonial times. As you mentioned, that's really how you carry things.

So as a child, you would learn how to make baskets. Now here in the city of Williamsburg, we know that basketmaking is not going to be a trade. City folk would go and buy a nice imported basket. So city folk are going to by those fine imports. But on the farm where the majority of our population is living, you'd have learned as a child.

Both boys and girls are going to be shown how to weave baskets about the age of 5 or 6. When you're a bit bigger and stronger you'd be shown how to split up the white oak tree.

Harmony Hunter: What are some of the common things that baskets are used for on a farm in this rural setting that you are talking about?

Terry Thon: Anything and everything. You're going to use your baskets for helping you get the fields ready in the springtime, cleaning up and taking away roots and dirt clods and just stuff in the field to bringing out those little tobacco plants to put into the ground. Harvesting, whether it be corn, potatoes, carrying little chicks to and from, bringing your hens or rosters to market. Baskets are just containers. You use them however you want.

Terry Thon: Actually when you look at paintings and prints of the time, you're going to see that most working baskets are very plain, they're very utilitarian. That's how we decide what we're going to make, is by looking at these old paintings and prints, plus of course we have passed down shapes that have just come down through the years.

Large round baskets that are of a bushel size seem to be the most common. We make a lot of those because it is just a very convenient basket to have. That's the basket that the farmer would pick up in the morning and take with him to do whatever it was he was doing out in the fields.

Of course you can make smaller versions for those smaller people who are going to be helping you. Children need little baskets, so you just make whatever is most useful for you.

Harmony Hunter: We think of baskets as sort of decorative things today, but they must have been pretty tough if they were being used like that for agricultural chores.

Terry Thon: They are. They're very durable. These baskets that we make today, it's one of the hardest things that we have to do is to get people to understand that baskets are just containers. Today people love baskets, and they spend a lot of money on them, they treasure the baskets, they put them on shelves, and are very pleased with them.

But in fact, a basket is just a container. It's a tool that you make help you do work on the farm. One of the kind of really wonderful things about baskets is that every culture on Earth makes some sort of basket. And of course for some people, baskets are very important and very decorative. And they'll reflect great beauty and artwork in their baskets. But English colonials, they're not worried about that. They just want a good, sturdy working container.

Harmony Hunter: Every culture has its own basketmaking tradition. What are some of the features that are distinctive about the European tradition, versus say the Egyptian, or the Native American?

Terry Thon: I think that most of the European baskets are going to be very utilitarian. They're really not that decorative. When you start going to some of the Eastern European countries, you do see some decorative aspects being placed into their baskets.

I think that it kind of depends on the person. If you want to make your basket a little bit pretty, then well you could, but overall they seem to view the baskets as just containers. They really have a job to do.

Whereas if you look at the Native American people, they take great time and effort to add a lot of beauty to their baskets, and their baskets are very important for cultural events. Birthing of babies, the passing of a person. So it just depends on what your cultural is as to how you enjoy your basket.

We see Africans bring with them beautiful baskets as well. Here in Virginia, we don't really allow the African people to use their cultural knowledge in their basketmaking skills. But if you go down to the Carolinas or into Georgia where they're growing rice, and that African style of basket is useful, we see them being encouraged to make those beautiful large coil baskets, called the Gullah baskets. They incorporate color and decoration into them.

Terry Thon: And that is true, in that the coiled of method that they're using for making those baskets down in the Carolinas is actually a sewn basket. It's not really woven at all. You take bundles of fiber and you're using a binder such as straw or strips of oak to actually sew those coils into place.

So you just begin at the very beginning and just begin coiling out and around. Kind of like making a rag rug today, a braided rag rug, where you just add layer upon layer and coil the basket out to the size you want it to be. Those are very tight, and they're very work-worthy, but they're not really as durable as the white oak is.

Harmony Hunter: You've mentioned white oak a couple times now. I'm guessing that must have been the preferred material for basketmaking.

Terry Thon: It is. That's the only tree that grows in this area that will split down very small and then stay flexible and tough enough to weave with once it has been split and allowed to dry. Everyone has white oak. So it's available for free to everybody.

You do not need special tools to make these baskets with so, no cost in tool making. And of course you'd have the labor of your family to make the baskets with, so it's perfect. White oak is just a great material for making these work baskets.

Harmony Hunter: Splitting and drying, what's that process like?

Terry Thon: Well the first thing is you have to go out in your wood lot and find a good tree. And you're going to look for a little tree, one that's maybe six or eight inches around, that's very straight in its growth. In fact, you're probably going to have to walk down into the woods. It needs to be in the shade so it doesn't have a lot of little side branches, and little knots and things on it.

So you cut that little tree down and you're going to use just the trunk, probably six or eight feet of that trunk. You bring that back, you set an ax at the end of the log, give it a whack with a big wooden maul, and then that's going to start a split. By using your wooden wedges, you can carry that split right down the length of that log, splitting it in half.

That is your technique. By just continually splitting in half, and in half, and in half. You'll finally get to the point where you're using just your pocketknife and your hands to separate apart the growth rings of the tree. And of course the growth rings are those layers of wood that the tree lays on each year as it grows. And white oak just does that. It just works that well for us.

Harmony Hunter: Have you ever tried any other type of wood, a pine or poplar, and found that it just doesn't compare?

Terry Thon: It just doesn't work. We know from experience, since basketmaking has been done for so long here, we really know what works well. Now in other areas of the country, you'll find that other woods will work in a similar way. If you live up in the New England area, you might use the ash tree. If you're down in the South, you might choose to try hickory. But here, it's only white oak.

Harmony Hunter: The upper class people, or the gentry, who would have been buying baskets, what were they using them for?

Terry Thon: Well they're going to take their baskets to market, they're going to have that good imported basket there on their arm when they go into the market for buying goods. I think you might also see some of the gentlemen, perhaps having a fine chicken basket for carrying their fighting cock into town for perhaps some good fights there at the taverns.

You use baskets for carrying things upon your horse, you find little like pack baskets being used on horses or behind the people as they ride. So again just kind of carrying stuff, whatever it is you need to carry, and again like sewing baskets in the kitchen for holding things that need ventilation, things like your citrus and things of that nature.

Harmony Hunter: This is a tradition that's existed at Colonial Williamsburg for several years now.

Terry Thon: It is. It began with Mr. and Mrs. Cody Cook who were recruited by the Foundation. They looked at many of the old basketmakers around that time and they settled on Mr. and Mrs. Cook because they had lived on their homestead since the 18th century and their family had passed this tradition down since that time. So we really felt that this was going to be a very good representation of what was being done here in the 18th century.

So they came to Colonial Williamsburg, I believe in the '60s is when they came. And they took on several apprentices, one who was Roy Black. Roy Black stayed, and he was the basketmaker here for many, many years. Well over 34 years I believe he was here. He's the gentleman who taught me how to make baskets. Roy was a wonderful basketmaker, a wonderful interpreter, and was a very, very good teacher.

Harmony Hunter: We want to encourage folks to make sure that the basketmaker's shop is one of the stops they make on their tour when they come and visit. Where and when can they come and find you?

Terry Thon: We're at the Wythe property, currently in the mornings from nine until one. And we're here Sunday through Thursday, and we very much enjoy folk come to chat with about making the baskets.

Harmony Hunter: Terry, thanks so much.