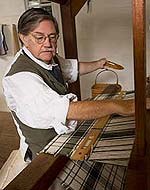 War makes the weaver busy. Cloth for everything from sails to bedsheets is created on his loom. Max Hamrick weaves the tale.

Harmony Hunter: Hi, welcome to the podcast. I'm Harmony Hunter. Many businesses suffered when the effects of the Revolution reached Williamsburg. Weaving was one of the few trades that boomed when the war started and foreign imports were banned.

Joining us today is Colonial Williamsburg's weave room supervisor, Max Hamrick, who can be found most days at his loom in the weave shop on Duke of Gloucester Street in the Historic Area. Max, thank you for being with us today.

Max Hamrick: Happy to be here.

Harmony: We started out by talking about what happens to weaving during the Revolution. Can we explain that a little bit more?

Max: Sure. Virginia is a colony where wealth was derived from growing tobacco. Land, tobacco, and slaves are a product about as powerful as petroleum; made us a very wealthy colony. To build a large factory and try to generate cloth, you would have been losing money. Because the tobacco grown in that land would have bought you more cloth than you could make. So we have no cloth factories.

As a matter of fact, throughout Virginia there are very few factories of any kind. So when you start shooting at England, there are some things that happen. First, they won't sell you any guns to shoot at them with. They really won't sell you anything. So some of the earliest factories that happened are weapons factories: armories.At Colonial Williamsburg right now we're rebuilding one of those. We're repeating history for you at the Anderson site.

Now, once we're up and running with guns, we need sails to move our ships. You need canvas for all facets of war; cloth for all facets of war. And you certainly can't fight the Redcoats naked. So some of the factories that are thrown into place early on are cloth factories. We do have a factory right here at Williamsburg on Queen's Creek.

Harmony: So if I understand you, you're saying before the Revolution, it actually made more sense economically to import fabric. But then the Revolution begins, we have a lot of trade embargoes, and all of a sudden you can't import anymore. Then weavers have to get busy.

Harmony: What kinds of things are they making other than things that support the war effort: the sails for the ships, the uniforms for the soldiers?

Max: The Williamsburg manufactory on Queen's Creek brought cloth over. Anything they could get that wasn't committed to the war effort. A lot of linen and a lot of hempen. Now, linen comes from the flax plant, and anywhere that we use or wear cotton today â€“ our tablecloths, our bed sheets, our clothes that go between us and the rest of our clothes â€“ that cotton-like fabric today, was linen in the 18th century.

I think it's important to note that America didn't have the industrial might that we're so tuned into at the time of World War II. Think about our boys at Valley Forge without enough blankets and without enough shoes on their feet. So all the cloth we could make wasn't nearly enough. However, the most abundant fiber we had was wool.

The least important fiber we could grow was cotton. We're before the cotton gin, and the cotton that we could grow had so many seeds in it and the fiber was so short that it was very labor-intensive. It became a little more important during the war, for the war effort, because you could add that to your wool and your flax and your hemp and increase the amount of cloth that you could make.

Harmony: We've talked about some real workaday fabrics here that get woven in the weave room. Are there finer fabrics or textiles that get woven there, as well?

Max: Occasionally we'll make something that's really, really fine or fancy, but it has to be something that modern man doesn't make anymore to tie up the assets of the weave room with. So all of the fine silks, brocades, and damask, almost all that can be purchased and we don't get to do much of that. So we stay pretty much in middle class and low-end and utilitarian and military cloth.

Harmony: Are we right in saying that trade really did boom for the weaver, that this was a good time for him?

Max: During the American Revolution throughout Virginia, weavers made an extremely good living, as did fullers, finishers, dyers, and other textile craftsmen. As soon as the war was over, so was Virginia's foray into the textile industry. We went back to trading with England again. It is actually cheaper to buy really good cloth from England than it is to make cloth here by hand with the equipment that we have here.

Harmony: We've talked about the Industrial Revolution using all of these modern implements for weaving, but when you think about it, weaving is probably one of the most ancient trades.

Max: The oldest woven cloth I know about is a little better than 8,000 years old. It came out of Swiss lake dwellings. It was spun cotton. The really, really interesting thing to me about that is not so much that it was woven, but it had been dyed.

So over 8,000 years ago, wherever man was going â€“ he was going to church, or going bowling or wherever he was headed at night â€“ he had the right color cloth. So weaving is about as old as man, and weaving is pretty much weaving.

Harmony: Dyeing is one of the things that you practice today in the weave room.

Max: Well the pigment is natural.

Harmony: What are some of the ingredients for those pigments?

They would throw the bugs on the cactus like seeding grass, just going in cloth bags and sling bugs, get a good breeding population, brush the bugs into buckets, drown them, make them dry and ship them. I'm told by experts that it takes 70,000 bugs to make a pound of red dye. I'm somewhat amused by that. I would like to talk to the man who counted them.

Indigo gives you blue. South Carolina and South America â€“ either way, you bought it from England. The indigo is very different recipes. You start a chemical reaction in the vat. You put your yarn or your cloth in. You leave it 20 minutes. Take it out, it's still white. And then it turns yellow, because the oxygen in the air works with a chemical in the indigo, and then it turns blue. But it will be baby blue so you layer it up.

That blue coat George Washington is seen in so many times â€“ 23 to maybe 26 dippings, depending on how strong. Indigo is also the only one of the colors that we have bothered to make any changes to. We found good, safe recipes for everything else. We've never found the recipe that's totally safe for indigo. So we removed one ingredient. The catalyst that gives you the chemical reaction is ammonia. And their source of ammonia in the 18th century was stale human urine. And you're going to have to pardon me, I'm not quite 18th century enough in frame of mind to work with that liquid.

So we use thiourea dioxide which provides us with an ammonia based product which is the same product in ladies' home permanents. Once again, we do the recipe as written, we simply removed one puzzle piece and replaced it with something else. Purple, the Spanish control. It's the heartwood of the campeche tree. I can do black with it as well.

Brown is local. It's too good a brown dye not to use. It's walnuts falling out of trees, the husk of the walnut. If you've ever picked walnuts up off the ground, you've got that brown stain on your hands. That's the dye; nice browns. Another dye that the English brought with them gave us orange. That's the root of the madder plant. Madder will grow just about anywhere in the world you can plant it where there is dirt.

The dyeing is really a wonderful stepchild for us. There were dyers in Williamsburg before there were weavers. In the 18th century it's known that fancy folks might have the color of a ball gown or a gentleman's three-piece suit changed. In 24 years of research I never found a dyer who made his living dyeing. He also plied another trade. One dyer was a hatter. Dyers usually do dry cleaning, spot removal and fancy pressing as well. So there's something else besides dyeing, even during the war, the dyer will do.

Harmony: One of the things I like about today's weave room is how integrated it is with other trades. I was reading that one of the looms you use came from the cabinetmaker, a lot of the fabrics that you make in the weave room end up being used in different historic houses, and might even be worn by different historic interpreters. Do you see weaving interwoven through the community in the 18th century as well?

The labor-intensive part of generating cloth is the yarn making. So on large plantations, slaves, usually the women would spin on rainy days or snowy days and the men would prepare fibers. These were field workers, not textile workers. And of course the English don't want you making cloth, so they sent you sheep that grow fast and taste good. They're rough, coarse wool producers. Rough, coarse yarn made into rough, coarse cloth by one man on the plantation.

George Washington's weaver was a hired man. I believe you'll find that Mr. Jefferson's weaver was a slave. That cloth was used to go right back to the same slaves who made the yarn. It wasn't economic, it was very much part of what you had to do to control a large population on a slave plantation.

So cloth making wasn't intertwined with the other craftsmen in the other homes in Williamsburg except during the time leading up to and including the American Revolution.

Harmony: Max, where can people come see you weaving?

Max: We're in the Taliferro-Cole house across the street from the end of the Bruton Parish graveyard on Duke of Gloucester Street in Colonial Williamsburg. I want to be sure to tell everybody to come by and see us in the weave room.

We do practice three trades and the domestic chore of spinning. We do spinning on two completely different kinds of spinning wheels from a fairy-tale standpoint: Rumplestiltskin's wheel to spin wool, flax and hemp, and Sleeping Beauty's wheel to spin the short, slick cotton we could grow in the 18th century. We practice the trade of dyeing.

We also do fulling, or finishing. There's always something different going on at the weave room, so you all come by and see us when you can.

Harmony: Thanks so much for being here.

Max: I had a good time, hope you did.