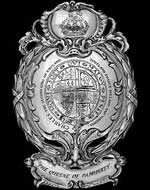 A lost relic returns to the Pamunkey tribe in a new form. American Indian Initiative Manager Buck Woodard guides us through treaties and time.

Harmony Hunter: Hey, welcome to the podcast, I'm Harmony Hunter. To tell you today's story, you need to know two things. The first is an introduction to the Pamunkey Indian tribe.

Kevin Brown: My name is Kevin Brown, I'm the Chief of the Pamunkey Indian tribe.

Harmony: The second thing you need to know is that in 1676, 100 years before the American Revolution, a planter named Nathaniel Bacon decided that Virginia's royal governor was not doing enough to protect colonists from Indian raids. He decided to take matters into his own hands, and with a band of men he went on a rampage, attacking Indians and their villages whether they were friends or enemies.

The event went down in history as Bacon's Rebellion. The Pamunkey Indians were one of the friendly tribes that Bacon and his men attacked, and after Bacon's Rebellion was put down, the King of England, King Charles II, was eager to restore peaceful relationships with that tribe and many others in the region.

We're at the Pamunkey Indian Reservation in Virginia today, the piece of land the Pamunkey tribe has called home since the Ice Age, and where many Pamunkey people still live today. We're here today with Buck Woodard, he's manager of the American Indian initiative at the Colonial Williamsburg Foundation. Buck, thanks for meeting us out here at the reservation today.

Buck: I'm so happy to be here.

Harmony: Just so folks can picture this a little bit, tell me about this reservation, where we're sitting now and its history.

Buck: The reservation is situated on the Pamunkey River in King William County Virginia. It is Northwest of West Point Virginia, and it's a remote rural community. This is their Indian town that's protected by the treaties of the 17th century. It's come down through today in trust for the Pamunkey; first by the crown and then by the Commonwealth of Virginia.

Harmony: Let's get back to the subject of Bacon's rebellion, and this really singular artifact that came out of it that was lost to history and then resurfaced. A peace medal, a frontlet. Talk to me a little bit about the efforts that King Charles II made to try to restore peaceful relationships with the Pamunkey and other Indian tribes.

Buck: A component of Bacon's rebellion, the treaty in the aftermath of Bacon's Rebellion is to establish British sovereignty on this soil in two ways. One, by controlling the colonial government, reestablishing control of the colony, but also through a formal subjugation of the indigenous population and putting a figurehead in place in control over the Algonquian speakers: the Queen of Pamunkey, Cockacoeske.

So the frontlet piece is part of the formal and ceremonial placing of crowns, robes and ornaments of station and images of regalness and royalty that would be befitting of a queen, whether it be of Ireland, Scotland, France or Virginia.

Harmony: This was a large, silver, ceremonial very grandly ornamented silver piece that was meant to be worn, we surmise now as maybe a frontlet that would be worn across the chest, or maybe as a headpiece.

Buck: Yes. It's one item in a list of gifts that are recorded in the records of Charles II. It's possible that it was given as a necklace, along with several bracelets.

Harmony: This was to sort of seal a peace treaty that was established in the wake of Bacon's Rebellion.

Buck: Correct. At the conclusion of Bacon's rebellion, three commissioners were sent to Virginia to discuss the matters as they stood and the government at the time but also to encourage a treaty of peace with the Indian nations that had been at war. And the Queen of Pamunkey clearly worked closely with the three representatives of the crown to hammer out these articles of peace.

Harmony: And this is a treaty that's still in effect today.

Now it's in the November, Thanksgiving timeframe where the two communities that hold reservation land continue to pay their tribute to the governor in trust for these lands and their titles and their relationship to the commonwealth.

Buck: It would seem that the frontlet stays in the possession of the leadership figures of the Pamunkey tribe into the 18th century. During the 18th century, many groups of the Chesapeake region, Algonquian speakers, Siouxian speakers, Iriquoians, are leaving the Virginias and migrating into areas that are controlled by the Delaware and the six nations. It's possible that the Pamunkey elected to remove at that time as well.

It would seem that during their migration they were bogged down by a severe snowstorm, a blizzard that blows in to this region. It does happen from year to year. One of significance that caused them to seek shelter and the historical record says that they traded this piece, this frontlet, this very large silver object that has a monetary value for coin.

Then they used the coin to pay a local farmer for their provisions: for grain and shelter. After weathering the storm they decided not to remove and return to Indian town. But at that point the frontlet left the hands of the Pamunkey and then was taken into a Virginia family. And then it was offered for sale at another point in time. And then it enters into, it stays in these Virginia families for almost 200 years.

It's offered to the Virginia Historical Society and then to the Association for the Preservation of Virginia Antiquities and it was taken by them at the beginning of the 20th century and it's been in their care for the last 100 years, on display most often at the orginal site of Jamestown that's controlled by Preservation Virginia and the National Park Service. Today it is in Richmond.

And so, we started looking at late 17th century and early 18th century material culture. This object came up on a list of other items that we were interested in considering resproducing. We recognize the significance of the medal to the Pamunkey people and its relationship to the land and the treaty.

Then ultimately it was decided to give the reproduction to the Pamunkey Indian Museum so that there would really be only two copies: one that was owned by Preservation Virginia, but this original replica one that was made by Colonial Williamsburg to go to the Pamunkey Indian museum in a new space that they're renovating in their museum. They're making a treaty room, a room just for the medal and the treaty and its history and its legacy at the museum in King William County.

Harmony: What does it mean for the Pamunkey people to be able to have this piece of history back home with them?

Buck: I can't speak for the Pamunkey people, but I have worked very closely with the Pamunkey Indian museum and the tribal leadership as this partnership has developed.

I can tell you I've heard that it's important to have a symbol, a physical symbol of this treaty back in their possession, back in a position of stature. They feel very honored to have been asked to come back to Williamsburg.

They last paid treaty tribute there in the late 1770s and so to come back to Williamsburg to the governor's residence and receive this frontlet, I thought was very generous. They were very honored.

Harmony: Going forward, how does this medal help the Pamunkey tribe?

Buck: I think one of the goals of the renovation of the Pamunkey Indian Museum is to situate Pamunkey people in this landscape as not just any community but this very specific Algonquian speaking community that has a long history, long culture and legacy in this region.

So walking into the museum, the idea is to make the treaty room the first thing that you encounter when entering into a Pamunkey space, so that you understand that this community has a government-to-government relationship, previously with the British crown, and then coming forward today the treaty room will also talk about the relationship with the Governor of Virginia that's remained unbroken through these many hundreds of years.

So the Pamunkey, out of all the communities in the East is one of the few that have retained control not only of their native lands, a component of it, but also have maintained this diplomatic relationship with first the sovereign of the English crown and then the Commonwealth of Virginia.

So in a way, the return of the Pamunkey frontlet marks a very significant return of slowly some stature to the Pamunkey people within the history and legacy of American Indian peoples in this region.

Buck: It's been my pleasure.