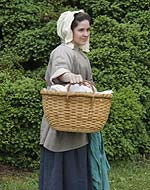 Could the war have been won without women? Author and Professor Holly Mayer thinks not. Learn more about the inner workings of the Continental Army.

Harmony Hunter: Hi, welcome to the podcast. I'm Harmony Hunter. The Revolutionary War battlefield was no place for a lady in the 18th century, and the presence of women was discouraged. Nonetheless, women reported for duty. Some were motivated by patriotism, and others were forced by finances.

Dr. Holly Mayer is our guest today. She's an author and professor at Duquesne University, and she's here today to share the stories of some of those women. Thank you for being here with us today.

Holly Mayer: I am very delighted to be here.

Harmony: Well before we get to talking about camp followers and the women who followed these Revolutionary Armies, let's start by talking about how the Army, the Continental Army of the 18th century is different from the Army of today. Why did the Army need all these people trailing along behind it?

Holly: You know, it really is different. We're talking about what we call the Early Modern Era, versus the Modern Era, which comes in the 19th century and into the 20th century. So armies do not have all of the official kind of corps that we do now, where it is military members who are doing all of these support services.

Now in the older traditional format of armies, it was very common to have camp followers. You are not going to have your strong, effective soldiers serving in the hospitals, always cooking, acting as servants for officers. You don't want them there, you want them drilling in the field and being prepared to fight. Why would you actually undermine your fighting force by putting these men elsewhere?

But on the other hand, there are all of these other women and actually male civilians as well who are not effective fighters, but could serve the military forces. Why not put them to work?

Harmony: So it's unofficial, but the Army does end up existing kind of in two halves: your official enlisted personnel, and also a whole encampment or whole following of people who trail along behind the Army to perform all of these services for it that it needs.

Holly: Let me put it another way. When you say, "trail behind." Because we say "camp followers." What does that name mean? Ok, there is the camp. Camp is when you actually put down your stakes for your tents, you go into an encampment, you're cooking up your rations, you're drilling, everything else like that.

And then the camp goes on the move, because if you are moving from one spot to the other you're going to get better food sources, maybe in another area, then you've got to move there. If another area is more secure, you're going to move your camp. If you're getting ready to go on campaign for the year, in other words, you are preparing to meet with the enemy and you are trying to find the proper battlefields in which to meet the enemy and you're on the move. So the camp starts to move.

Then start to think about all of these extra personnel with them, these followers of the camp. Part of that is they are following because they are under orders. Washington, for example, when the Army was marching through Philadelphia, said, "Women will not march with the men." Because he said he wanted to put on a show. He wanted the citizens of Philadelphia to see armed men marching in ranks, looking really martial. This is the force that is going to win this war for you.

He doesn't want them to see all of these scraggly women with them, because that's not quite the martial picture that he wants to present. So I want people to think of armies as this massive group of not just uniformed soldiers, but all of these supporting personnel that both look like they are disordering the Army â€“ which they are, they're making it harder to control the Army â€“ but at the same point, they are offering something in return. It doesn't look like they're offering much when they're simply following on a march, but once you get back into camp, yes they are.

Harmony: Let's talk about that. What do we know about the types of people who end up becoming camp followers?

We do see that some of them as soldiers' wives simply even if their community still belonged to the American side, if their husbands didn't actually have land or didn't have a business, and had been working for somebody else, who's going to support them?

A few women did volunteer to be nurses on their own, or to be matrons in the hospitals. And in this case, you could say they were truly trying to find work that they couldn't find anywhere else. Thus they decided they would follow the Army that way.

Harmony: We've talked about laundresses and nurses. What other types of jobs would women have found to make themselves useful to the Army?

Holly: Again, I do want to emphasize the primary work that most of them found were as washerwomen, as laundresses. There weren't enough of them. Outside observers looked at the American Army and said it's always so dirty that they needed more women, they needed more people to do their washing for them.

Nursing; again, they could volunteer or in some cases be impressed. At times there were not enough people to serve in the hospitals. Now this is not as professionals. Nurses were not trained professionals. They were not allowed to give medications, they were not supposed to perform things like that. They were primarily there to wash the wounded or ill soldiers, to clean up after them. Those kind of particular duties.Some of them volunteered if their own husband was sick or wounded. They would go in the hospital so that they could keep an eye on him at the same time that they were serving others.

The only real professional woman was the matron. She came in there and she was supposed to supervise the nurses and she would have some duties about supervising supplies. So she was better-paid, had a higher position than what the nurses would have.

The other primary duty that a woman would have would be as a servant. And that's again where you would find both African-Americans who were slave or free, or indeed white women acting as servants. Other officers also hired women as servants at various times, whether it be as cooks, as washing, or other kind of duties when they're in camp. I think where you see a lot of this, again, is when some of these officer's wives would come in camp and they need more help. The word would go out: is there any woman, anybody available to act as a servant?

Harmony: It sounds like the Army had sort of a love-hate relationship with the women and the camp followers.

Holly: Washington didn't want the women. He saw them as a drag on his Army in many ways. It could be literally that they're on the march and they're not moving as fast and he has to worry about their security. Is it possible that the enemy would attack the baggage trains, and then the possibility of in such an attack would hurt the women and children. And what do you do in a situation like that? It's harder for him to control them. So he did see it that way.

They were a cost if you're going to ration them. We know over and over again that the Army did not have enough rations, and so what you're ending up doing is taking rations from soldiers to ration some of the women. The only way he could justify that is to say, "You will work for your rations. You will do this kind of washing duties. But you will do something for us in return for our support of you."

I think the final part of it for Washington is that he had really hoped to create the image of a new kind of army: a virtuous, republican army of citizen-soldiers. That would be men that would leave their families and their homes behind and put all of their energies in serving their countries in serving this particular cause.

He was worried that if you brought in all of these women and children that it no longer looks like that kind of virtuous citizen-soldier army. It resembles the British Army. It resembles other European armies that always had camp followers as well. That that was part of their traditions. He didn't want to look exactly like them in that way.

In fact, he wanted his army to look like them in terms of discipline, or even better in discipline than they did. So he wanted the virtues of the best modern armies, but not what he saw as the vices of those modern armies. Instead he got a little bit of both.

Harmony: Despite the fact that they bogged the Army down and they had a bedraggled appearance, do you think that the war could have been won without the help of women, camp followers?

I think without a doubt you needed women to win the Revolution. You needed them at the very beginning of the Revolution as they served to support boycotts. They were part of the mob actions to protest British actions. They were certainly important to the Army in the camps. They were important to maintaining the home front when men were away. Think about it. If they weren't there on the home front, maintaining the farms, how would you have fed the Army?

To stay in the field and to be active like that in eight long years is not a matter of simply fighting. You're not fighting every single day; day in, day out, year in, year out. All of those days of those eight years. No, you're fighting very seldom. There's all these few little fights, and you've got the quick fights, the guerilla action. You've got the big battles, you've got the sieges.

Harmony: Thank you for being our guest today.

Holly: You're most welcome, it was fun!