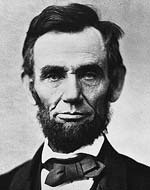 Abraham Lincoln makes good on the founders’ promises of freedom and equality. Author Gordon Wood lays out the Revolutionary origins of the Civil War.

He's joined us here in Williamsburg as part of a two-day symposium examining the Revolutionary War's responsibility for the Civil War. Professor Wood, thank you for being here.

Harmony: Can we review for folks the way that the Revolutionary War, or the Constitution's failure to address the question of slavery more fully, sets up the Civil War?

Gordon: The founders, the Revolutionary leaders, knew that slavery was inconsistent with the ideals of the Revolution. You can't be having a revolution on behalf of liberty while you're holding slaves. They knew that was wrong.

But the reason they didn't tackle it directly was because they thought slavery was on its last legs, that it was dying away and would eventually be not important for Americans. Now, they couldn't have been more wrong. That was just an illusion they lived with.

So that's why they tabled the efforts to abolish slavery in 1790, '91. They left the problem to fester. Then of course with the Missouri Compromise, all eyes were opened to the fact that slavery was not going to die: that it was going to persist and expand.

That's what Lincoln was dealing with in 1860. He ran on the Republican party platform to prohibit slavery's extension to the West. That was such a threat to the way of life of the Southerners that Southern states seceded.

Harmony: And what was at stake with the secession? It was more than just a war that Lincoln was facing: it was the failure of the democratic ideal. He had more to lose than just the sons and brothers of American citizens.

Gordon: Definitely. In fact, I think the interesting question is not why the South seceded; we can explain that because there are lots of threats of secession from the Revolution on by New England states, for example. So secession is more easily understood.

The really interesting question is, "Why did the North care?" Why didn't they let them go?" That's what Lincoln was not going to do, because he had this vision, this dream that America stood for something that couldn't be let go. This vision of democracy in a world of monarchies. That's what he's talking about. That's what we have to save.

Harmony: It seems to me that Lincoln is the man who might have the most to resent from those ideals of the founders – from the work of the founders. Because it comes to his doorstep. The culmination of that problem comes to a head on his watch and he's the one who has to really address this issue.

But Lincoln really clings to their ideals. And not only does he believe in them, but he is able to cite them on a couple of really important occasions and use them to remind the country what we're about.

Gordon: Exactly. He draws inspiration, sustenance from the founding, from the ideals of the Revolution. Which, after all, were what Americans were all about, and still are all about. That's what holds us together: our belief in equality, liberty, self-government. There's no American nationality. There's no American ethnicity. So the only thing that does hold us together are these beliefs. That's what he drew upon.

He thought he had a special connection with them. He talks about, and Americans did. He talks about the flesh of our flesh, the blood of our blood; relating to these founders, that they are somehow in us. He uses images of all sorts: the electric cord that connects us with these people back then.

This principle of equality, which is what he appeals to mostly, which was articulated by Jefferson, that all men are created equal in the Declaration, becomes the major principle of what the Revolution's about, or what the Civil War's about as well. So Lincoln really makes the Revolution the central theme of his defense of the Union, this defense of this experiment in democracy that is threatened by the breakup of the union.

Harmony: The genius of Lincoln, and the tenacity of Lincoln is that he does more with these guy's principles than they did.

Gordon: Yes. That's true in the sense that he's willing to wage war, a long and bloody war on behalf of these principles, and the dream of the United States being the last best hope of America. Now the person who first uses the term, "hope," the only hope in the world, is Jefferson. But the last best hope is Lincoln's reading of that term.

In a world of authoritarian governments, we stood alone. By the middle of the 19th century, all the French efforts at Republicanism had failed. Napoleon III was on the throne in France. All of the efforts of the 1848 revolutions to create republics or democracies had failed.

So when Lincoln says we are the last, best hope, that's literally true. In the western world, there were no democracies and therefore the stakes are as high as they could be. That's, those are the words he used. His sword, as one historian has called it. Were just the thing that held the union together.

Harmony: You're a Revolutionary historian, you've spent a lot of time with the words of the founders and the intents of the founders. It seems to me that Lincoln redefines the Constitution as they wrote it, and I wonder how you would respond to that.

Does Lincoln give a new meaning, or impose the meaning of his times on their words?

Gordon: Well it depends on what founders you're talking about. There certainly were founders who were willing to do something about slavery. But others, mostly the Southerners, felt that this was not the time, that the future would take care of itself and so on.

The irony is, of course, that Jefferson, the man whom Lincoln most appealed to was a slaveholder, holding hundreds of slaves. So you have that irony, that paradox in our history that the man who is most responsible for our ideals, if you think of the Declaration of Independence embodying our ideals, was an aristocratic slaveholder. Lincoln uses his words, his ideals, to inspire him and the nation.

I think Lincoln couldn't have done this by himself. He's tapping into the sentiments of Northerners who are willing to sacrifice hundreds of thousands of lives on behalf of this cause that he articulates better than any person could have.

Harmony: I wonder if there's something about the purity of these thoughts. The way that these ideals are so sort of unimpeachable that in a time where the country is arguably as divided as a country can be, Lincoln has to call down on one notion. He has to quote one piece of scripture that he feels like everybody can get behind – that's a unifying idea for the country.

And what he draws on are those original thoughts as expressed in the Declaration and in the Constitution. I just love the connection between the ideal that creates the nation and is the same ideal that saves the nation at the point where it nearly breaks in half.

Gordon: Well go back to the Revolution, you're realize that this was a new event in the history of the world. Otherwise, what was a colonial rebellion of 13 colonies, 2.5 million people, on the other side of the world 3,000 miles from centers of civilization. Why should their little colonial rebellion matter?

Well it mattered to them, and I think to liberals elsewhere in the world, because they turned it into a world historical event by saying, "We're not revolting just for ourselves, we're revolting for all humanity." Our little rebellion has worldwide consequences. That was the vision of the founders, of the revolutionary leaders and that is, I think, what makes Lincoln's appeal to them meaningful.

He's saying, look, we are a grand experiment. If we fail, then free government, self-government fails. That's still going on. That's what we see in the Middle East today. So that dream of democratizing the world through our beginning. And of course they thought the French Revolution was a copy of our revolution. Lafayette as well. He sent George Washington the key to the Bastille, which had triggered the Revolution 1789, and where it hangs today in Mount Vernon.

So the sense that we were the beginners, the instigators, of this worldwide revolutionary movement to democratize the world begins with the Revolution. Lincoln feels that the world, that worldwide dream is threatened by our failure. Because if we fail, then it's all over. If we can't do it, who will follow? Who will try?

I think that's the kind of sentiment he appealed to and that really mustered support. Otherwise it's hard to explain why people would have supported this dream. Why not let the South go? What difference would it make? It wasn't that they were all abolitionists, they didn't go to war just to rid the world of slavery. They went to war to save this union, this dream of self-government.

Harmony: Thanks so much for being our guest today.