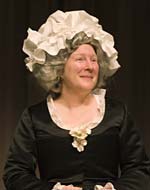 While General George Washington commanded the troops in the field, Martha led the charge at home. Historic Interpreter Lee Ann Rose describes the impact women made during the Revolution.

Learn more: Martha Washington The Sentiments of an American Woman

Harmony Hunter: Hi, welcome to the podcast. I'm Harmony Hunter. War was an occupation for men at the time of the American Revolution. There were few formal opportunities for women to contribute to the cause.

But Martha Washington had a hand in changing all that. She used her high profile as General George Washington's wife to set an example for ladies in all the colonies, and she spent her time in the camps raising morale and providing comfort where she could.

My guest is Lee Ann Rose, a historical interpreter at Colonial Williamsburg who interprets Martha Washington.

Lee, thank you for being our guest today.

LeeAnn Rose: It's my privilege.

Harmony: What could a lady like Martha Washington contribute to the cause, or what kind of contribution did she introduce to the cause?

LeeAnn: Unlike camp followers who really had nothing else to do but to follow their husbands, Martha Washington went mostly because of the propaganda of the time period. You know, her husband becoming Commander in Chief, there were many people that wanted to find fault with him as far as Loyalist papers, as well as British writing things about them. Martha learned very quickly that what she did and how she behaved reflected upon her husband. So that's why she went.

A lot of other generals' wives went because they missed their husbands. Caty Green is a perfect example of this. Caty Green was either coming to a camp full in the belly with child or leaving the camp full in the belly with child. She found that at times during her pregnancies, she just could not stand being parted from her husband. So she would come to the camps to be with him.

Lucy Knox came to the camps because the other women were at the camps. She didn't like the fact that other women would be there and she would not be. She's often writing to General Knox, saying, "Well why is Lady Sterling there, and Mrs. Washington there, and you have not yet called for me?" The men would call for their wives to be there, knowing that it was one way to bring a little bit of home to them. Because they could not leave the army to be with their wives.

So these women get these letters from their husbands, and they had the fortitude to know that they were needed, and they went. When they got there, there were roles that they played for their husbands' comfort, but these women then realized that all the soldiers are looking at the generals' wives, these ladies that are coming to camp. Soldiers came out to welcome Mrs. Washington into the camp. So she is realized that these soldiers are really identifying with her.

So these ladies started to find, much like ladies that have the means and money today, they can be philanthropists. Esther Reed, Joseph Reed's wife, in Philadelphia, he was the Governor of Pennsylvania, she realized very quickly that her prestige of being the governor's wife could start "The Sentiments of an American Woman" and start these ladies' associations.

Harmony: You've mentioned "The Sentiments of an American Woman." This is an article written by Esther Reed. Let's talk about that, explain what that was and what it did.

Well, Esther Reed takes some of these writings that were in this association that the men wrote, and she wrote her own association. Going back into history and looking at the women, like the Spartan women, and the women that rallied around their men at wartime. She used some of this imagery in what she wrote in "The Sentiments of an American Woman," and she wrote basically a manifesto for how women should behave during war.

But part of this manifesto was creation of these Ladies' Associations to raise money for the troops. It was around the year 1780. We had Valley Forge, we had Morristown the second time around. A lot of people will remember Valley Forge as being the worst winter camp Washington had, but Morristown, that after Valley Forge the ice and the snow was so bad that the men didn't get their shelters built.

Martha writes about coming into the winter camp and seeing young soldiers on the ground pushing the snow away, and didn't even have the benefit of blanket. So these words are going out to these ladies that had the means to do something.

So Esther Reed's "Sentiments of an American Woman" had a second part to it, and that's to create Ladies' Associations to ask women to put their money into the cause. But it wasn't just for these ladies that had the means. They asked for 20 dollar species, whether that be coin, whether that be Continental dollar, whether that was even French francs, because the Marquis de Lafayette's wife gave money to the cause as well.

But if you didn't have the 20 species, if you were a poor widow, and we have documentation that widows gave money, free black women gave money, little girls gave what they could. But if they didn't have the 20 species, they would lump the money together so the 20 dollar species amounts were being put in the book. So if you didn't have 20 dollars, you would get together with someone else, and then all your names would be put on that 20-dollar note. Then those would be given to a treasurer, and each one would be given to the counties, and then all that money would be given to the governor's wife to give to Martha Washington, for her to take to her husband, for him to use it where he sees fit.

But it's interesting, when these ladies put all this money together, Washington and Esther Reed argue on how the money is to be used. Esther Reed and Sarah Bosch, Franklin's daughter, very much wanted the money to go to the troops, and that each soldier would use the money where he sees fit. If he needed shoes, he would use it for shoes. If needed it for shirts, he would use it for shirts. If he needed it to go back to his family because they were about to lose everything, he would send the money back home to the family.

But Washington was a little concerned, because the soldiers had not had money for a while. He was afraid that if they got the money, they would use it for things that really weren't quite appropriate. So he writes back to Esther Reed, listen, I'd rather have linens bought by you women, and you take your sewing and make shirts: three shirts for each one of the soldiers. Now Esther Reed writes back and says that's not really what we women wanted to do with the money. Washington writes back to her again, and Washington finally ends up getting his way. But there is a bit of these women kind of saying what they wanted to do with their money.

Harmony: What kind of an effect did their fundraising have? How much money did they raise, did it really make a meaningful difference for the troops?

LeeAnn: They raised 300,000 Continental dollars for the cause. And it did have a great effect on the troops. Now, unfortunately for Esther Reed, she doesn't live to see what she put together come to fruition. Many people think it was the pressure that was put on her because of what she was trying to make happen that caused, at the time, she had had a child. She was coming out of her childbed fevers and such, she was doing fairly well. But all the pressure that she was under, they think, led to her demise. So she never saw that come to fruition. But Martha did.

Harmony: What other kinds of efforts did women make in the colonies to support the troops besides fundraising?

LeeAnn: You had ladies start to knit stockings. Martha Washington took some of the slave women out of her fields and out of the sewing they would do, the fancy stitching that they would do up in her chambers with her, and she put them into a workhouse. They started to weave, they started to knit, they started to make cloth themselves for her to take to the winter camps.

Ladies that had the means could donate clothing, could donate food supplies to the Army because they had the means to supply not only their household but the Army. With the men all going away to war, men were the vestries of these churches of England. They're the ones that took care of the widows and the orphans, and took care of the churches. And the women, the ladies started to take over those roles, knowing as part of their Christian nature, they started to take care of the widows and orphans themselves of their community.

Harmony: It probably was not Martha Washington's intent to force a paradigm shift in the way that women were involved with something as unladylike as war. Yet she did. How does Martha Washington use her prestige and her leadership role, her very visible role, to make this something that is stylish and acceptable for women to participate in?

LeeAnn: She did it by leading her example, but not pushing. You know, Martha even when she goes into the presidency, never pushes past the 18th century ideal of women, like a Deborah Sampson does where she dresses herself up as a man and actually goes to fight. She keeps in those 18th-century parameters of the loving mother, the loving wife, and she just makes it grow.

She's a loving mother to now a camp full of 300, 400 men. She's the comforter of her husband. The dinner parties that she would have at Mt. Vernon, now she's having those dinner parties for generals so that her husband can speak with the generals or the aides-de-camp, all the men that helped her husband.

Martha never outstood the boundaries of what it was expected of the 18th-century woman, so she showed women that the boundaries that you always kept, you can now do, but take a few more under your wing. Take a few more in your community under your wing. Be that Christian woman that you are being asked to be, and take that into the greater confines of a suffering nation.