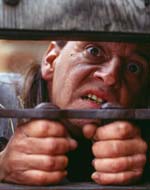 Williamsburg’s jail, or gaol, set the standard for colonial prison architecture. Visit the building this year as we celebrate the 75th anniversary of its reconstruction. Architectural historian Carl Lounsbury describes the structure.

Harmony Hunter: Hi, welcome to the podcast. I'm Harmony Hunter. This year is the 75th anniversary of the 1936 restoration of one of the Historic Area's most popular buildings: the gaol.

It's a building that stands today on Nicholson Street, and when it was built it set a new standard for prison architecture. With us now is Architectural Historian Carl Lounsbury, and he's stopped by to tell us a bit more about the history of jails in the colonies.

Carl, thank you for being here with us today.

Harmony: Before we start talking about the architecture of jails, I think we need to briefly talk about the way that we understand jail today versus the way that jail was understood in the 17th and 18th centuries. By that I mean: today we understand jail as a punishment in and of itself. But in the 17th and 18th centuries, it was more of a place where you waited for your punishment to be decided.

Carl: That's right, Harmony. The, in the colonial period, most punishments were either corporal punishments: that is, immediate punishments of being put in the stocks, the pillory, or subjected to whippings at the whipping post or worse, hangings.

Incarceration, being put away in a building away from everybody was not a punishment in and of itself. It was, as you said, at the beginning it was just a way for people to secure prisoners before trial began, or to put the prisoners back into before the punishment was executed.

The earliest jails were simply buildings designated as jails, so they were not very purpose-built. They were just simply a dairy or a kitchen or a house on a plantation that a sheriff owned.

Carl: They were awful. They were miserable. If you're lucky only you would be in there. But if you're unlucky, these are rooms that might be 9x12 or 10x15 with three, four, five other people. Who knows what kind of illnesses they may have brought with them?

But once in there, these buildings were not cleaned very much. They didn't have window glass, and so it was cold. Most of the criminal jails were unheated. This made terrible conditions during the wintertime; it was very cold. Sometimes they gave them blankets, sometimes they had to make do with what they could find.

Harmony: So they have no sanitation. Maybe a window if they're lucky.

Carl: If they were lucky, and the window didn't have any glass in it. So what air there was, of course in the summertime was hot and fetid, and as you can imagine, it smelled terrible.

Harmony: They started thinking about jails differently as time went on, as the 17th century progressed into the 18th century. What sorts of changes begin to be made in the construction and the philosophy of jails?

Carl: Well, I think they got tired of people breaking out of the flimsy constructed structures. In fact some of the earliest jails were post in the ground buildings just like the simple post in ground structures that farmers built on their plantations. They were covered with clapboards on the outside, but in between there was nothing.

So a really desperate criminal could just simply kick out the clapboards, slip through the studs and make his escape. That happened several times. So what they started doing was lining the interiors of these jails instead of just having the exposed framing and weatherboards on the outside, what they did was to put thick planks with big spikes, nail them to the studs both on the floors, on the walls, and the ceilings. They also put the studs closer together, six inches or so, so it's hard to squeeze through these things. But there were still clever ways to get out through windows.

Again as I said, because these prisons, people were not watching them 24 hours a day, if the prisoners had friends who wanted to help him out, they might come up at night, slip a few tools through the window, and they could saw their way out. That happened over and over and over again.

Harmony: You had a great example of a guy who actually climbed up through the chimney of the jail he was in?

Carl: Yes, that was an infamous jailbird down in Norfolk who was in jail accused of a crime and awaiting his trial. This jail actually had a chimney, so he climbed up through the flue, got out, robbed a store, and then climbed back down. He said, "Well you can't accuse me, because I've been in jail this whole time."

Harmony: It's the perfect alibi.

Harmony: Now, it may seem like an obvious solution to these flimsy structures that people can just basically kick their way out of. Why were they built from wood and not something more substantial, like brick?

But if they decided to build a new courthouse that was brick, your taxes might go up to Â£30 a year. So it's a substantial increase in how much you have to pay. Then it would go back down after two or three years. It wasn't sort of pegged to a certain wealth level. It was simply if you needed that much money that year, your taxes went up.

Harmony: I want to actually quote you to yourself. You've written a book called "The Courthouses of Early Virginia," and in it you lay out what becomes, I guess we should say, a proud history for Williamsburg and Virginia. Because in Williamsburg a prison is built that sets the standard for future prison construction.

You say, "It was the construction of the public jail in Williamsburg in 1701-3 that provided the model for prison architecture for the next generation of county prisons."

How is what Williamsburg constructed, how does that become a model for future prisons? What are they doing differently at the Williamsburg jail that had not been done before?

Carl: Well there are several things. One is it's made of brick, so it's more permanent material. It's harder to burn down. I should say that many criminals had the tendency to escape by setting fire to their building that they're in. Sometimes they were lucky and got out in the confusion, sometimes they burned up if they couldn't get out. That happened a number of times. So brick was a permanent material. It's harder to get out of; not impossible, but harder.

The other thing was that they created initially in the first construction by Henry Cary, the builder of the Capitol who built the prison as well, they provided a cell for men and a cell for women. So the indiscriminate mixing of sexes and all the confusion that might cause was mitigated to some extent, so that was an improvement.

They also provided an exercise yard, an enclosed 10-foot-high wall about 20 feet by 20 feet which allowed prisoners to get out and get some exercise instead of being inside their cells. So that was a great improvement.

And fourthly, they provided a space for a jailer that was attached to the prison, which meant that he could oversee any disturbances and keep an eye on these prisoners. So that was an improvement.

Harmony: Well the fun part about this story is that Williamsburg's jail is a facsimile of a building that you can see today. The Williamsburg jail was reconstructed in 1936. I want to talk a little bit about how we know what we know about that jail. Was that reconstructed by the architecture firm Perry, Shaw and Hepburn?

Harmony: And they were the principal architects of the early days of the restoration. What did they base their reconstruction on?

Carl: Well, they did archaeology. I should start by saying that a fragment of the original building survived. After the provincial government left Williamsburg in 1780, the county, James City County, took over that building as its county jail. That was continually used. It was changed around but still in use through the early 19th century when it was replaced sometime in the middle of the 19th century. So elements of it had survived. It was much battered and much changed, but that did give some indication of finishes, the brick materials, and patterning of the mortar joints and things like that.

Archaeology then helped flesh out the story by excavating and finding where the debtors prison was located, which was connected to the jail yard. Part of that jail yard had survived and been incorporated into the early 19th century county jail. Then they excavated in front of it and found that a wing had been added on to the provincial jail in 1722 to give more space for the debtors. Finally, the debtors got moved over in the 1720s to a heated space which improved their lives significantly. And the jailer added on to his space, which improved his domestic life significantly.

Then they actually found evidence for another section that was added to the south in 1773 which was not reconstructed, but that was an addition to the jailer's house. So the jailer's house actually at the time of the Revolution was much larger than what you see today. So it was the archaeological evidence, the physical evidence that did survive of that much-battered original structure, as well as documentary evidence. They pulled all that together.

They didn't do as much field work as we would do today to look at other jails to see what they looked like. So some of the finishes that they have they could have discovered in many early 19th century jails, which didn't change that much in terms of details, and have survived and we've recorded those. But they did what they did.

Carl: Our investment in jails says something about our culture. We often, as architectural historians, talk about the best buildings, which are fine gentry houses or fine public buildings. But it also tells something about that society of how they treated the poorest people. The miscreants, the troubled people. That, too, is part of our story.

The ideal jail was one that you had to deal with segregation of sexes, segregation of criminals and debtors, as well as the segregation of blacks and whites. Because this is a racist culture that existed in the 17th and 18th and 19th centuries. So the ideal jail might have six different rooms, but none of them ever did.

So they had to compromise some way or another. And that's fascinating. Were slaves thrown in with white women debtors? And that's the case in Richmond, that we know that was in fact the case. It's an interesting issue. Because delicacies that you see everywhere else enacted on the landscape somehow break down in the jail.

This is where you can see how society doesn't work, and how people deal with the frailties of human existence.

Harmony: Carl, thank you for being here.

Harmony: We hope that all of our listeners will come to visit our restored and reconstructed buildings in the Historic Area.