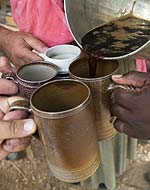 In an age when water was suspect, sometimes beer was the safest thing to drink. Food historian Frank Clark discusses the brewing process common to most colonial homes and recreated in Historic Area kitchens.

Harmony Hunter: Hi, welcome to the podcast. I'm Harmony Hunter, and my guest today is Frank Clark, supervisor of historic foodways at Colonial Williamsburg. We're so glad to have you with us here today, Frank.

Frank Clark: Well thank you Harmony, it's a pleasure to be here.

Harmony: I asked you here today to talk about whiskey, but before we get into whiskey, I think we'd better touch on water.

Water just isn't always obtainable clean and pure. That was well-known for a long time. Water can make you very sick, it can kill you. Milk can kill you if it's not pasteurized and sterilized and dealt with properly. So because those things were so dangerous, and there was really no way of knowing whether it was good milk or bad milk, or good water or bad water, most people avoided them and drank alcoholic beverages, which were known to be safe.

Harmony: What are those beverages?

What this does is, in fact, alcohol boils at a slightly lower temperature than water. So by putting these things in a still and heating it to the right temperature, you can get the alcohol to boil off, leaving behind the water. That alcohol will go through tubes, condense back into a liquid again, and be in a much more pure form. So by distilling fermented beverages, you can create distilled beverages, which have much, much higher concentrations of alcohol in them, and will never go bad. That's one of the main reasons why people distill things is that it extends the life.

So that is one of the reasons why alcohol became so important to our colonial forefathers, is that there weren't a lot of other safe alternatives to it at the time. Now most people on a daily basis drank a very low consumption of alcohol, like a small beer, which may be 2 or 3 or 4 percent alcohol. It's not like they're necessarily drinking whiskey all day long, but they are drinking alcohol all day long. They are, however, drinking some, going off and working, coming back, drinking some, going off and eating, coming back and drinking some. That sort of a thing. So if you consumed, say, four or five beers throughout the course of the day, takes about an hour for your body to process one ounce of alcohol. So, you can basically maintain not being drunk, even though you've had five or six beers throughout the day.

Harmony: Where are these people getting alcohol? Are they making it at home?

Frank: Sure. They're making it themselves, they're buying it imported from England and imported from all over the world&ndashthe distilled spirits, the molasses down in the Caribbean being the most common until the Revolution. It was being distilled in the Caribbean, it was also brought up as molasses to New England and being distilled there and then shipped to Virginia as well. Rum was very common and very affordable, especially prior to the war and such. They're making their own beer at home.

Generally in Virginia they used molasses to brew that beer â€“ molasses, hops and wheat bran or oat bran that they would boil together, put in yeast and ferment it and make that into what they called small beer here. They are also making cider, pressing apples into cider and its peach version known as "mobley," which is fermented peach juice, were very popular in colonial Virginia.

Harmony: How do we know about these, the history of these beverages in the colonial period?

Frank: Well, if you read the accounts of people like Landon Carter, he talks about planting barley, turning it into malt, brewing from it. He talks about peaches and those sorts of things. We know from the number of stills found on inventories that people are distilling things at home on a regular basis. Now some of that may have been alcohol, but some of it may have been distilled other things: perfume or flavored waters, cinnamon water or caraway water or that sort of thing, which wouldn’t necessarily be alcoholic, but they're certainly using stills at home.

We know from the number of descriptions of brewing equipment in those sorts of situations. Looking at inventories for things like yeast and hops and molasses and those kinds of things we find large quantities of those in many households. In fact, from looking at inventories, I've found about 80 households here in town that I think were probably producing molasses beer for their own consumption at home.

Harmony: Now this is a topic that you know fairly intimately, not only from the perspective of research, but you've actually tried your hand at recreating a lot of these brews.

Frank: Absolutely. We do that, in fact, four times in the spring and four times in the fall. We present our program, "The arts and mysteries of brewing" at the Governor's palace scullery. Our intention there is to show folks the brewing process itself, and how beer was produced at that time. We work with a wide variety of colonial styles of beers, all recipes that I've found in brewer's manuals written during the period.

It's been a great deal of work in the sense that a brewer's manual is written for a professional brewer and is dealing with huge quantities, often 250 to 400 gallons per batch. We're making 10 gallons. So we have to sort of do some reverse mathematics to reduce these recipes down to reasonable quantities for us to work with in our actual brewing situation. We're always sort of tweaking the recipes a little bit here and there to make sure that we're getting closer to our understanding of what things were at the time. So it's been a long research really for me.

In fact, we discovered a few years ago a way to translate the 18th-century measurements to give alcoholic strength in beers into modern measurements, which we could finally understand. When we did that, we realized that we were making one of our beers, the porter, too strong. So we had to change the recipe for that beer to make it more in line with the alcohol readings we were getting from the period.

Harmony: What were their measurements and what are ours?

Frank: Well they use a scale known as brewer's pounds, and it's a very difficult mathematical scale that is converted through a formula to give you alcoholic percentage. Today people use one of two scales â€“ either Plato or Brix, which are scales that were invented by these gentlemen who came in in the 19th century and are a little bit easier to read. When you buy the device known as a hydrometer or sacrometer, it will have those scales on it.

Now, the problem is that none of the modern hydrometers have brewer's pounds on there. So trying to figure out a reading that was written in brewer's pounds into a modern scale measurement didn’t make any sense at all to me until I found a fellow in England who was an old brewer who said that they used to use brewer's pounds up until the ‘30s or '40s as a common measurement still in England. He knew a formula to convert them over to the Brix scale which actually I could use. So I was able to get from him that formula and then go back to the 18th century manuals, look at the recipes and the readings, and then convert those over to a number that I could actually understand.

Once we did that, we realized we were putting too much sugar in the porter, we have to cut back the recipe a little bit.We were making them about 8 percent alcohol, and it turns out most of them were about 6.5 percent alcohol. So we then reduced the strength of that beer because of that. So it's been something that we've spent a lot of time researching, and we like to show folks the process of the brewing with the brewing programs in the spring and fall.

Frank: Well that's the thing, is once the war starts, and especially once the Chesapeake Bay is blockaded in 1780, the access to the beverages from England and the cheap rum from the Caribbean and the molasses to make your own sugar or to make your own small beer for that matter, kind of dries up. So they have to find alternatives that are native here in Virginia. Really in this period the most popular alternative becomes cider, and then whiskey.

Whiskey is extremely important economically to America, especially after the war, because it allows us to convert a perishable, bulky commodity like corn into an imperishable item as such that takes up a lot less space. So especially as people start spreading west, and they're farming out in very rural areas, moving and transporting the corn to markets becomes very difficult.

If you could distill wagonloads of corn down into one barrel of whiskey, that whiskey will never go bad, it's much easier to transport than barrels-full of corn, and you get a lot more money for whiskey than you do for corn. So that's exactly what happens. The farmers out in the western part of America begin to make their own whiskey and then turn their excess crop into that as a way of selling it and making money.

Harmony: It's so interesting to see the part that alcohol plays in America's history. Do you think that people understand the role of alcohol in the Revolution?

Frank: Not really, because you also have to understand that the culture that is surrounding it at the time is also interwoven into everything you do. When the Burgesses leave the Capitol building because they're expelled by the governor, they don't go home, they go to the Raleigh Tavern. They sit there and they continue their discussion over bowls of punch, over glasses of porter or ale, over wine, over whatever they chose to drink. But alcohol was certainly there.

In the taverns in New England, the Sons of Liberty get their start in their taverns up in Boston in places like that. The tavern, in many cases, was the political hotbed of the Revolution. That's the one place where everybody can meet together and basically talk as freely as they want, with a few exceptions. But short of treason, you're able to speak your mind in a tavern, certainly unlike you are able to speak your mind in church, the other place that everybody in the 18th century would gather.

So I think because of the social setup of the taverns and their role is often underestimated in terms of the Revolution, because they are the places where all of these discussions really occur and can occur in sort of a free and open atmosphere.

Coffeehouses play that role, too. Certainly in England and later in Virginia, coffeehouses start to become places of political debate and discussion as well. But there were complaints in some of the English coffeehouses of spies and people who were watching and listening to what was being said by certain people and keeping track of them. I think that's harder to do in a tavern, so probably taverns were even a little freer than coffeehouses, just in the sense that alcohol loosens the tongue a bit more.

Frank: Thank you, my pleasure.

in Food and Drink, Health & Life | No comments