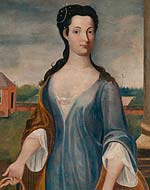 Harmony Hunter: Hi, welcome to the podcast. I'm Harmony Hunter. Sometimes the best thing about studying history is learning that we're really not very different than our forebears.

It's possible that this is most true when it comes to vanity. Eighteenth-century men and women put a great deal of time and study into the art of beauty.

Meg Brown has made a special study of the cosmetic products and techniques that made the 18th century beautiful. Meg, thank you for being here today.

Meg Brown: It's my pleasure.

Meg: Cosmetic is basically powders, pomades and perfumery. It can cover household fragrances as well. If you have a closed-up room that smells dank or musty, in a lot of the different books there's different burning perfumes to help clear out a room.

Harmony: And we have to think about them a little bit differently, too. They have a different ideal of beauty than we do. What is the 18th-century ideal that every woman aspires to?

Meg: The 18th century ideal is really not to have a tan. We're so used to having tans here in modern times. But tanning often meant that you were a worker, that you were outside a lot. That's not the ideal. You want to be someone who has someone else to do the work for you, truly, in the 18th century. So clear, white complexion, avoiding freckles, unfortunately. Any sort of sun spots or anything of that nature.

You really want to have a nice clear complexion, a little bit of roses to your cheeks, a rose and cream complexion is often how it's described. And dark eyes and darker eyebrows to help set off your eyes. We're not using any cosmetic on the eyes at this point, at least French and English culture isn't. Darker hair actually tends to set off the lighter complexion.

Harmony: If the ideal is to have very white skin, very dark hair, and dark eyes, it must follow that some of the primary cosmetics are skin whiteners and hair darkeners?

I haven't found much evidence of that here in Virginia, but in London and high society in France especially, you are seeing this white cosmetic. It's called ceruse, and it's of course highly toxic. We know that today. When it was first starting to be used during Queen Elizabeth I's reign, folks weren't really sure that it could cause such damage.

But by this point in the 1770s, doctors are recommending against using the white lead cosmetic. Those that made the cosmetic, the workmen, complained of having dizziness, having nausea, having headaches, primarily because they were the ones pounding the lead down into a powder. So everyone by this point knows that this fashion is probably detrimental to your health, but there are still several folks that end up using it.

Harmony: What are we using to darken hair? And also you mentioned darkening eyebrows to frame the eyes. What are the recipes for that?

Meg: Darkening the hair, one of the best ones I've found that I've experimented with is a black walnut and white vinegar hair dye. It's using the outer husk of the black walnut, which yields a wonderful, dark, almost black dye, and boiling it in the white vinegar and then anointing the hair with it. The longer you keep it on, the darker the hair gets.

As far as eyebrows are concerned, one very successful receipt I've found is using cork and cloves burnt together and ground up fine. Elderberries are also used. Black lead combs are used as well. But the books say that the cork and cloves is the best.

Harmony: And what about if you have very thin or non-existent eyebrows?

Meg: Thin or nonexistent eyebrows, you can purchase mousehide eyebrows, as odd as that might sound to us. They are not frequent. They are made fun of quite a bit, but they are available. I have not seen them here in Virginia, but there are lots of evidences of them in French and English culture.

There's a wonderful poem by Matthew Prior, I believe is his name, and talking about a lady peeling off her eyebrows and setting them on her dressing table at night and the kitten runs away with them as fees belonging to his prey. So there are different alternatives out there. How frequently they are used we don't really have a lot of evidence of.

Harmony: Often in portraiture we see these beauty marks, these black perfect circular black marks. How are they achieving that?

Meg: Well they're patches, or "mouches" is another word for them. They're made with either leather, fabric or paper. They can be black or a dark scarlet color. They can be any shape or size and they're stuck on with mastik, which is a gum resin essentially. Or spittle is also used.

There are many different documents talking about these different patches. Entire celestial bodies going across a lady's forehead. Different patches in different areas were significant. If a lady had a patch in one area of her face, she might be a Tory. If she had a patch on the other side of her face, she might be a Whig. So they have political leanings as well. So they can be any shape or size, including a coach and six as well.

Harmony: You mentioned that the ceruse, the paste that you apply to your face to whiten it, contains toxic lead. Do we have other common ingredients that are also now understood to be toxic?

Meg: Well there's mercury used. There are different blushes or rouges that contain a mercury supplement. So we know now that those aren't so good for you. There's a lot of different ingredients that we try to avoid today.

Meg: As far as cosmetics are concerned, it's a ritual. And I know for many ladies, myself included, it is a ritual. In the morning you get up, you get dressed, and then you start putting on the cosmetic. In the 18th century, it's very much the same idea. But if you were someone of a higher level in society it's also considered a very social time as well. You could have friends, you could have family visit and socialize with them as you are having your hair done, as you're putting on your cosmetic.

Harmony: You've done a lot of research about cosmetic use in the 18th century. What do you find is being used in Williamsburg in that colonial period?

Meg: Well unfortunately we don't have a lot of diary entries on it. We don't have a lot of letters saying so-and-so was looking this way or that way. So what we have to base this on is a lot of different books that are available for cosmetic, even a lot of the cookbooks of the period contain cosmetic recipes for perfumes and especially balms. So those are available for research and also newspaper advertisements.

In the newspaper advertisements you're seeing different waters available, such as lavender water and rosewater and orange flower water. The list goes on. I have seen some evidence of white lead being sold in the different stores around Williamsburg. I can't identify, however, that it was being used for cosmetic as opposed to painting.

Harmony: What's the most common cosmetic used in the 18th century?

Meg: I would say probably different balms for the skin. Perfumes are used quite frequently as well. You see those very heavily advertised in newspapers. But balms such as lip balms or skin balms, for different skin troubles are very frequently used. Though washes for the skin are frequently used as well, such as the rosemary and white wine wash.

That recipe seems to start in the 16th century, and it doesn't change all the way up through the 19th century. I see it happening quite frequently. It's one of those that was probably passed down from mother to daughter to keep the skin clear.

Harmony: Is there an 18th-century product that you've swapped out for a 21st-century one that you prefer better?

Meg: Actually, yes. As much as this is going to make you cringe, the hog's lard balms are wonderful for the skin. I get very dry skin in the winter, and I've made several batches of them for my friends, and they all remark that they were a little bit nervous about using it at first, but afterwards, they wouldn't use anything else.

Harmony: You've cooked up a lot of these different concoctions yourself just to test them out and try them out. As you try to recreate those products in your kitchen in home, at home, does anything strike you about the lengths that they went to for beauty? Are they more excessive than the lengths we go to today? What do you find as you're immersing yourself in that world?

Meg: I don't find it excessive, because I believe today a lot of people use a great deal of cosmetic, just the same as they did in the 18th century. I find that I have done a lot of the cosmetic receipts by cooking them over the fire as they would have done, and certainly over my stovetop is a lot easier to do. It's more the amount of time that's involved in the cosmetic receipts.

We're a culture so used to having things instantly, to wait for the different pomades, the different perfumes to be ready. That's something that was a little bit new to me. There's a rose vinegar that I had to wait 40 days just to smell, and I was so excited, but I had to keep it corked up. There's a four thieves vinegar that had to wait for six months before I could uncork it to smell it. So I think the waiting game is the hardest part of it.

Harmony: If somebody wants to research these receipts and these techniques, what would you recommend as a resource for them?

Meg: If anyone has any interest in a particular book to get started, I would recommend "The Toilette of Flora." You can find it actually on google books. That is the foremost cosmetic book of the 18th century.

Harmony: Thanks so much for being our guest.

Meg: Thanks so much for having me.