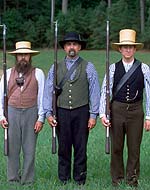 The Civil War has its roots in the American Revolution. Explore the causes and conflicts in “Storm on the Horizon,” a special two-day Colonial Williamsburg event February 18th and 19th, 2011.

Harmony Hunter: Hi, welcome to the podcast. I'm Harmony Hunter Coming up February 18 and 19th, Colonial Williamsburg will partner with the Chautauqua Institution and the Smithsonian Museum of African American History and Culture to present a two-day symposium called "Storm on the Horizon: Slavery, Disunion and the Roots of the Civil War."

Here with us now is Director of Historic Area Programs and Productions Bill Weldon to talk to us about the program. Bill, thank you for being here.

Harmony: It might seem strange for an institution like ours, whose focus is on the Revolutionary War, to host a discussion on the Civil War. Why are we talking about the Civil War in Virginia, and why now?

Bill: Well I believe the sesquicentennial of the Civil War, the 150th anniversary is an important opportunity for us to look at early American history, and in our case, the Revolution period and the period of the early republic, where we can very clearly see that the issues that would eventually lead to the Civil War are already very much factors in people's thinking, in regard to the issues of slavery, the whole question of the union.

What did the 13 original states really have in mind in regard to this entity that they called the United States? What were the terms of partnership as were then eventually defined in the Federal Constitution? But the issue of slavery, the question of whether or not states, individual states, could secede, from this union were already very much on people's minds even in the period of the Revolution.

Bill: Well, I really like the way you put that: the unfinished business of the Revolution. Because this issue of slavery was always this huge concern that many people in the Revolutionary period knew was going to continue to be a thorn in the side of the republic, and a thorn in the side of our ability to really achieve all the promises of the Declaration of Independence.

Part of what we will feature in the programming here that weekend will be addresses by James Madison and Thomas Jefferson regarding the Virginia Resolution of 1798 and then the Kentucky resolution of 1798 and '99 in which they directly called to question the powers of the new Federal government and what they recognized as the responsibilities of the states to challenge that government when they felt it had overstepped its bounds, when it had exceeded the authority that had been given to it in the Constitution.

Harmony: Let's talk about the program itself, "Storm on the Horizon." When you open up that two-day program, what are some of the questions that you want to address as you begin to unpack this issue of how the Revolutionary War leads into the Civil War?

Bill: Well the program will begin on Friday night February 18 with a lecture by historian Gordon Wood, entitled "The Revolutionary Origins of the Civil War." Here again, referring back to the disagreements about how slavery should be characterized, about how the future of slavery should be looked at by the founders.

A lot of people don't realize, but in the debates over what should be in the declaration of Independence, the whole issue of slavery was a huge question mark. Thomas Jefferson's original language was felt by the pro-slavery states â€“ the mid-Atlantic and the Southern states especially â€“ to have the potential to inflame the enslaved populations and to really sort of undergird the arguments for abolition, or for some kind of roadmap for eventually putting an end to slavery, for stopping the practice.

Jefferson had to change the language that he put in the final draft of the Declaration of Independence, particularly so that the delegates from South Carolina would buy in and agree to be a party to the Declaration. So that early. There are actually events and opinions expressed even earlier in regard to the trouble that slavery will continue to be for the country.

Harmony: It's so interesting because you think of Colonial Virginia as being, if not the heyday, certainly close to the heyday of slavery where it's enmeshed in every aspect of the economy and daily life and the functioning of our society. That even at this point in the 18th century, it's a serious bone of contention.

I think we see in Dunmore's Proclamation, you see Dunmore taking advantage of this unrest and trying to actually sort of parlay some of that discontent into a win for himself, when he offers a promise of freedom to slaves during the Revolutionary War.

Bill: As a matter of fact, Dunmore was of the opinion that if he merely threatened to arm slaves, that would be enough of an incentive to for the patriots to put aside their rebellion and to try to reunite with the crown. Because there was no greater fear among the white portion of colonial society than that of slave rebellion, of slave insurrection.

Harmony: We should say what we're talking about when we mention Dunmore's Proclamation. This was during the Revolutionary War. Lord Dunmore was the Royal Governor of Virginia, and he offered freedom to any slave who would fight for him, on the English side, against their colonial masters.

Bill: That's right. Issued in November of 1775. After he had already abandoned Williamsburg, had been away from Williamsburg for about six months at that point in time and was reaching for any measure that he could think of that would help in the rebellion, quote unquote.

Harmony: So when we look back at slavery as an institution over time, or even spanning those two wars, we can see different promises of freedom that were extended to slaves.

Bill: That's right. Our program on Saturday morning February 19th is entitled exactly that, "Promises of Freedom." From the Emancipation proclamation to Dunmore's proclamation.

The program will begin with a slave in the Civil War era having just received a copy of the Emancipation Proclamation. As he looks it over, studies the language there, he remembers stories that ancestors told him about these earlier proclamations. Then we go into a series of scenes from our Revolutionary City program which really relate the story of the enslaved and how they interacted with the whole Revolution.

Harmony: You alluded to this earlier, how some of the founders â€“ Washington, Jefferson, Madison â€“ felt that the issue of slavery and the issue of union might become a problem down the line. What do we hear from some of those founding fathers, some of their opinions on where they thought the republic would be in a couple hundred years?

Bill: Well none of them really speculated that far ahead. They could already see in the contentions of their day and time the real issues that were going to be challenges to the continuation of the union as it had been established.

One of our programs on Saturday afternoon as a part of the Storm on the Horizon program will be George Washington giving a portion of his farewell address, in which he identifies sectionalism and factionalism as already being serious problems for the peace and harmony of the union. As elements that could in fact contribute to the dissolution of the United States at some point in time.

Party politics, factionalism, as they referred to it, had already emerged as being extremely divisive. To some degree, this broke down along sectional lines, as a reaction to and as an antidote to federalism, which was sort of the reigning political philosophy that really led to the establishment, or the writing of the Federal Constitution.

Harmony: We're looking at the sesquicentennial, the 150th anniversary looking back at the Civil War from a distance of 150 years. As we consider it from this vantage point in history, what should the discussion be about? What do you want people to think about and take away from an examination of and a discussion of the Civil War and its roots in the Revolutionary War?

Bill: Firstly we want people to recognize that a lot of the issues that are still contentious in contemporary society that are still divisive, frankly, have always been with us, have been with us since the founding of the country. The Civil War put an end to chattel slavery, but it certainly did not put an end to the degrading force of racism in our society.

In our present day issues are perfect examples of this whole question of the nature of the union, with all the questioning that's occurring now in regard to certain policies that the Federal Government is trying to deal with. These issues go right back to the same issues that were being debated during the Revolution and the early republican period and carried through the Civil War right into the present day.

Harmony: Bill, thank you so much for being here.

Bill: Thank you for having me.

Harmony: Make plans to attend this symposium. Learn more and register now at www.history.org/storm. If you can't attend, two of the program's lectures will be streamed live on www.history.org.

On February 18 at 6 p.m., go to history.org to watch streaming video of author and historian Gordon Wood's speech, titled 'The Revolutionary Origins of the Civil War."

On February 19th at noon, visit history.org to catch the live stream of professor and historian Alan Brinkley's speech, "How do Presidents Succeed and Fail?"