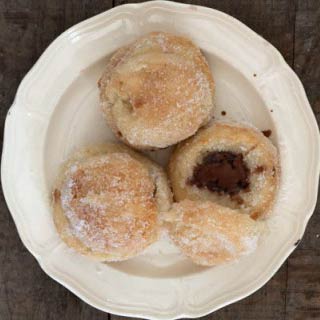 A new blog from Historic Foodways presents 18th-century recipes in 21st-century terms. Get cooking with Frank Clark at recipes.history.org.

Harmony Hunter: Hi, welcome to the podcast. I’m Harmony Hunter. While most chefs look forward for trends and advancements. My Guest Frank Clark and his crew in Colonial Williamsburg’s Historic Foodways consistently look backward to find their inspiration. A new Colonial Williamsburg blog at recipes.history.org invites you to join the experiment and cook alongside our 18th-century chefs.

Frank, thank you for being here with us today.

Harmony: Now before we start talking about this new blog project, can you talk to me a little bit about Historic Foodways at Colonial Williamsburg?

Frank: Basically it's our goal to recreate the foods of the period, the cooking techniques, and the recipes of the time to show folks the work that went into food preparation and the kinds of things that people were eating 200 years ago. So what we've done is re-equip the kitchens with modern reproductions of the original equipment that was in there at the time. So we know exactly how many pots and pans and so forth were in each of the kitchens. And then we'll use that equipment along with the recipes of the period to try and recreate the foods of the time.

Harmony: So you've started a new project, this Foodways blog. Tell me about that. How does it work?

Frank: Well, it's really sort of offshoot of a project we've been working on for a long time, which is a cookbook. We felt, all of us have felt that these recipes are very tasty, they're delicious, as well as part of our heritage, and they're things that people ought to be trying to cook at in their homes today. What we're going to try and do is introduce a new recipe every two weeks and we'll have the original recipe as it was written in the cookbook of the time, and then we'll have a modern translation. That will show you have to do it at home using modern equipment and temperatures and times and so forth. So that folks get a chance to try it.

Now that's really only half of the process. Because what we want to do is get feedback from the people who are preparing these recipes to tell us how they found them, what worked, what didn't work, if they made substitutions or changes to the recipes, how that worked out for them. So we want to make this an interactive blog with the public as we announce the recipes, we'd love to have people cook them and then write back to us to tell us about their experience with the recipe and any questions they might have about the processes or that sort of thing.

So we're hoping to make this a much more interactive experience than a cookbook ever could be -- just reading a recipe on a written page. Where we'll have sort of a two-way conversation going between ourselves here in Historic Foodways and the general public at large who are trying to prepare these historic recipes at home.

Frank: Well, there's a number of measurements of that time that are done weight rather than by volume. So, with some of the measurements we simply have to convert them over from weight into volume. And that's easy enough to do. The problem is that when cookbooks were written in the 18th century they were typically written by professional cooks for an audience of professional cooks. So they often don't have a lot of details. They'll say things like, “add sugar to taste, put in cloves, cinnamon and nutmeg.” No quantities given. No amounts given.

And so, we as modern people have to take that that direction and try and figure out well, how much nutmeg is too much, how much cinnamon is too much, what tastes good in this recipe? So, we prepare these in a modern test kitchen and we try and translate those things originally. Now, there's a number of concepts in translating this recipe. We can do them directly, which is really what we try and do in the kitchens, which is to be as honest as possible to the original recipe. But, you know, people have a much better knowledge of cholesterol, calories, vitamins, minerals in their food and their health today than they did 200 years ago.

And as a result of it, recipes that have, you know, a half of pound of melted butter in them are no longer very popular with the general public. So, we've also included some little tips for some ingredients that can be taken out of the recipe for health reasons that really won't affect the taste or the flavor or consistency of the recipe but will make it much healthier for people to do at home.

Harmony: How have you chosen the recipes that you want to start the blog with? What was important to you to include?

Frank: Well, we wanted to have a wide variety of both meat dishes and vegetables and savory and sweet dishes so that was enough different choices for people to try many different things. But we also have some of our real personal favorites in this first collection of recipes. We've also chosen recipes to demonstrate different cooking techniques of the period, different processes, and to show people how some of the basic foods that we have today have changed over the period of time, or haven't changed in some cases.

Frank: Exactly, that's a tough translation. First off, temperatures. We don't work with thermometers. We have no idea what temperatures we're dealing with in our kitchen every day. And we don't need to know that because we've developed the skills to work around knowing degrees Fahrenheit.

And so that's been a difficult challenge for us, in a sense, is that we have to actually start to work with temperatures and things like that that we don't normally deal with on a daily basis on our job. But I think there's also a attempt to try and connect some of the equipment and processes of that time to things that we still have in our modern kitchens today.

Harmony: I'm curious, when you're cooking at the Governor's Palace kitchen or behind the Peyton Randolph House, what is the tool that you reach for most often? What's the cooking implement that's always near your hand?

Frank: My knife, which is always at my side. And that's still true of any cook today. Their knives are always treasured, always important, and hopefully, always sharp. So that's the most basic tool that a cook has. Many of the other basic cooking tools haven't changed in 200 years.

Spatulas, they're are made out of metal instead of Teflon, but you know, their shapes and their form hasn't changed a whole lot in 200 hundred years. Wooden spoons, metal spoons, skimmers, strainers -- all that same basic equipment we have in our kitchens. So, some of the basic stuff really hasn't changed in hundreds of years.

Harmony: What are some of the 18th-century ingredients that maybe were common then but are not common now?

Frank: Well, there's a bit of a holdover in the 18th century from medieval process which was to not only spice food but to perfume it. To make your food smell good. The perfuming agents most popular in this period were orange flower water and rose flower water. These are distilled from the petals or flowers of oranges or roses. They give a nice floral aroma to foods. That's something that people don't do anymore. They really don't typically perfume their foods the way they did at that time. So that's an ingredient that has become very difficult to come across.

Deer horns were used and shaved to make gelatins. Isinglass, which is from the air bladder of the sturgeon fish or certain tropical fishes is used to make gelatins in this period. Those things are difficult in the average market today.

Now understand something--even the ingredients they had that we still have today and are readily available to us have changed a lot, too. Think about the pig. We raise an heirloom variety of hog here at Colonial Williamsburg known as an Ossabaw hog. These pigs, when they go to market and are full grown are generally about 150 pounds. A modern hog going to market today is generally between 300 and 400 pounds. So we've doubled the size of the animal in the last 200 years by breeding, by genetics, all these sorts of processes that we do with our domesticated animals.

But at the same time, what we've done is reduced the fat that is produced by the animal immensely. So that there's probably the same amount of fat on an 150 pound Ossabaw hog as there is on a modern 400 pound pig, in terms of overall volume of it. The Ossabaw hogs are extremely fatty, almost half their body weight in some cases was fat. Now, 200 years ago this isn't a problem because hog fat is rendered into lard. A fatty hog just meant you got more lard.

But today we know that with the health issues and cholesterol and all that connected to the fat, we want our animals to be leaner and leaner. The modern turkey is a creation of man, not of nature. We've bred these animals to the point where they can barely even walk on their own. And so we've changed the domestic animals over the last 200 years. The plants, the same way. Broccoli, in the 18th century, there are people in the city of Williamsburg growing red broccoli, green broccoli, purple broccoli, and white broccoli -- what we would think of as cauliflower.

Today, you go to the grocery store, really all you see is the green. So we've lost a lot of the genetic diversity of our plants and animals over the last 200 years as well. And as a result of that, even some of the same ingredients have changed a lot. The modern Grade A large egg is very different from an egg produced from a natural chicken, especially the 18th-century varieties of chickens that we raise here in Williamsburg.

That's why whenever possible we try to work with the heirloom products of our gardens and the rare breeds products from our Coach and Livestock department because we know those meats and vegetables match the recipes better than what we're getting in the store today.

Harmony: What do you hope that people will discover as they cook some of these recipes in their own kitchens?

Frank: The really important thing that people should discover is that food is fun. And that, you know, a lot of people think of history as a series of dates and events in the past, but if you try and eat history, you find that it's a little different. And I think you'll find it delicious.

And that's what we're hoping that people will sort of pick up on, is that all throughout history people have valued food. There are a lot of reasons why we eat what we eat. I think it's very important for us to look back how we used to eat and see some of the changes and understand why they have occurred over the past 200 years.

Harmony: Frank, thank you so much for being with us today. And listeners, we hope you'll join the experiment today. Find the blog at recipes.history.org and get cooking. Let us know how your recipes turned out.

in Food and Drink, Trades & Technology | No comments