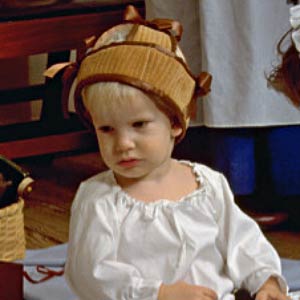 Harmony Hunter: Hi, Welcome to the podcast. I’m Harmony Hunter. We’ve talked about life in the 18th century for all sorts of people on this program, but we don’t often think about one very substantial group of Williamsburg’s 18th-century population, and that’s its children.

Program Developer in the Department of Public History Kristen Spivey is my guest today to help us think about what it was like to grow up in colonial Virginia. Kristen, thanks for being with us today.

Kristen: Well, let’s start at birth. First of all, birth was a very trying time just as it is today for the mother. But today when children are born, they are almost immediately identified saying, “This is a boy and I’m going to dress him a certain way. This is a girl and I’m going to dress her a certain way.” Whereas, in the 18th century, very young children were dressed identically. It was very difficult to tell which was a boy and which was a girl. And that went on until they were sometimes as old as five or six years of age.

Boys and girls would be wearing long white gowns and they would be put into stays after they were maybe beginning to toddle around -- both boys and girls. When they began to walk, they would be given what were called leading strings. There’s a saying about being tied to your mother’s apron strings. Well, in the 18th century to keep children safe, they would sew little bands of cloth to their shoulders. With that piece of cloth the mother could reach out and grab them if they were about to run into trouble.

Some people may have heard the saying, “He’s a puddin’ head.” Well, puddin’ head actually referred to a pudding cap. The name comes from the look of this padded, some people call it a crash helmet. It is a actually a very sweet-looking little device that goes over a child’s head when they were learning to walk.

If they fell, it was padded with probably any number of different things, but oftentimes wool inside a leather band. It went around the head and then was crisscrossed over the top so that it wouldn’t fall down over the head and reach the neck. A child would wear that when they were learning to walk so that they wouldn’t hurt themselves, and a small child learning to walk may be called a “puddin’ head.”

Harmony: So boys and girls until the age of about five you said, they would both be wearing these long gowns and then also stays, this tightly-laced undergarment that would support their whole trunk and abdomen. At what point did boys and girls start being dressed differently?

Kristen: Well about that age of five or six the girls might begin to be dressed similarly to their mothers. Although, actually some of them kept on wearing that little white gown.

Boys, on the other hand, would be put into their breeches and it was called being "breeched." And the breeches are usually down to the knee with a buckle to hold it in place, sometimes tied though. Then they would be wearing the stockings up to the knee, the breeches come down over that, a waistcoat, which is a vest, and then their shirt underneath that. Depending on what they were doing they might be put into a coat as well.

The girls, on the other hand, that little white gown can still be worn with stays. The thing is, it laces up the back so you do need help getting into it. The interesting thing about the little white gown was that usually they would have tucks taken in the bottom of the gown. As your child grew you could drop the tucks and that would allow you to put that same gown on a child while they were gaining in inches of height.

Harmony: At what age do they start going to school, or can we even think about them enrolling in school in the same terms that we do now?

Kristen: No, not really, at least not here in Williamsburg, let’s put it that way. There were some places that had schools, but most of the time children were educated at home. Now sometimes the church might have classes taught by the minister, for instance, but most of the time children were learning their first letters, numbers, and a little bit of reading and writing from a parent. But there were no public schools certainly in the 18th century. There were tutors available.

You could hire someone to come in if mom and dad couldn’t do it themselves or didn’t have the time to do it. Tutors could be hired and they would teach the basics. Usually once you got past reading and writing and maybe a little bit of arithmetic, then there’s a differentiation. Boys might well, if they’re going on to the college certainly, they’re going to start learning something like Latin and Greek and what was called natural philosophy, which is science, moral philosophy, which is religion and other much more difficult subjects.

Girls, on the other hand, they’re going to start learning things specific to housekeeping because that’s their greatest expectation is that they will be housekeepers. They will be mothers and those are the skills that they need to learn. They need to learn how to cook, how to clean. Keep in mind when we say “clean,” it’s not just the vacuum cleaner and the dishwasher. They’re doing it from making the soap. So you had to learn how to make the soap, and how to get that stain out of a wooden floor: that kind of thing.

Harmony: They enter into adulthood at an earlier age than our kids do today. At what age do they start getting married and setting up house for themselves?

Kristen: It’s somewhat variable because, officially at least, boys are considered in legal terms are called infants until the age of 21. Nobody actually goes around calling them an infant, but that was the legal term was infant and girls 18. But many of them married before that age with parental consent. The age of 18 is the age of consent, which means they are able to marry without a parent’s permission.

But many of them marry younger than that. Girls of you know 16 maybe, 17 that was not at all unusual. But actually by the end, third quarter of the 18th century most girls on the eastern seaboard were marrying in their early twenties, early to mid-twenties. Many, many women today of course wait their marriages until their 30s.

But the period that we are commonly representing here in Williamsburg, it was not unusual as I said to see 16, 17 but it was much more common to see early 20s for young ladies and mid to late 20s for young men.

Harmony: What kinds of representations of life for colonial youth can we find today in the Historic Area? If people come and visit what are they going to see that lets them know about the experience of children?

Kristen: Well we have many domestic sites in Colonial Williamsburg. There are children who work here -- we have over 100 kids who work in costume in the Historic Area mostly during the summer months when we have the majority of our families visiting. There are some who work throughout the year as well and they do the chores. They show how the chores are done, they show dancing, the lessons that the children learned in the 18th century.

And in the absence of children, when they aren’t physically there, you see toys left lying around and games and different things of that sort. Clothing that they wore, you can find both in the homes and places like the millinery, where they show not just adult clothing but children’s clothing as well. So there’s a number of different places.

And of course the interesting thing to realize is if they go to visit any of the trades in Williamsburg all of them had apprentices and those apprentices were starting at a fairly young age.

Harmony: What other kinds of resources do folks have if they want to learn about things for kids to do in the Historic Area?

In the 18th century they just had started to have publications for children. So they might have little stories in them and poems to go with learning your ABCs and that way they could have a childhood. Because the idea of childhood was a fairly new idea in the 18th century. The idea of having a period of time when you were just allowed to be a child as opposed to a miniature adult.

Harmony: Kristen, thanks so much.