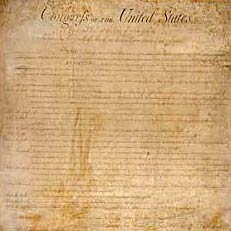 Do you know your rights? Professor of Law Henry Chambers explains the lasting wisdom of the Constitution’s first 10 amendments.

We’re thinking about the Bill of Rights this week â€“ how different would our society look without them?

Here to help us consider that question is Henry Chambers, a professor of law at the University of Richmond. Thank you for being here.

Henry Chambers: Thanks for having me.

Harmony: I guess any discussion of the Bill of Rights should begin with a general outline of “What is the Bill of Rights?” Can we talk generally about how they are attached to the Constitution, how they’re a part of our country’s legal system?

Harmony: What rights are specifically enumerated in the Bill of Rights?

Henry: Tons of particular rights are enumerated. Our first amendment includes, of course, all those rights of free citizens, including right to free exercise of religion, freedom of speech, freedom to peaceably assemble, petition government, things along those lines.Second amendment rights include the right to bear arms.

Harmony: Why was it necessary to enumerate these specific rights? Wouldn’t the Constitution have been protection enough? What were the two sides of that coin â€“ arguments for and against specifically enumerating these individual freedoms?

Henry: That’s a darn fine question, and indeed is one that was a real issue during the Constitutional Convention. The problem that you get when you have the Constitution itself without a set bill of rights, is that there’s a fear that the federal government will fill all the possible power vacuums with its own power.

So as a consequence, if you read just the first seven articles of the Constitution â€“ the part of the Constitution that was ratified first â€“ there arguably is not a sufficient limitation on the power of the federal or national government. Without a limitation on those powers, the concern is that the federal government can run roughshod over citizens.

As a consequence, what you need is a bill of rights that will tell citizens precisely what their rights are, as against the government. Recognize that many state constitutions that were in existence before the Federal Constitution was in existence, those state constitutions, many of them, had bills of rights of their own that protected a number of rights that the Federal Bill of Rights protects. So you had that argument that you needed to have a bill of rights in order to protect those individual rights.

Harmony: So some people felt that since the Constitution already included a system of checks and balances, there wasn’t going to be this danger of runaway power like they saw in the monarchy of England, which was what they were trying to avoid.

So as a consequence, the idea is that we had a completely different system. So you did have to, in theory, recognize that the people were the sovereign. Now that’s a double-edged sword, of course. Because if the notion is that the people are in control, then in theory you don’t necessarily need a bill of rights. That, at least, is the argument. If the people are in control, then you don’t need a bill of rights.

Other folks would argue, “No, no, no, no, no.” The people are in control, therefore it ought to be stated specifically what rights the people have. That was a part of the fight.

Harmony: And what about the question of, by guaranteeing certain rights, it might imply that those that weren’t specifically guaranteed weren’t included in that package?

His argument was, “Look. The federal government has certain rights and it won’t bleed into new areas.” He also took the argument that, as a consequence, if you say specifically what rights citizens have, that seems to suggest that the government has every right that’s not enumerated.

Harmony: So the first ten amendments are ratified in 1791. When we look back at those today, how relevant are they to today’s society? Did the founders do a good job of guessing at what some of the lasting issues for this type of government would be?

Henry: Oh, yes. They’re incredibly relevant. Although we do want to remember that the founding fathers did not pick these up out of whole cloth. A lot of these were already in the bill of rights of particular states. So as a consequence, it’s fair to say that they picked up the general notion of what citizenship rights were. And indeed, the bill of rights in state’s constitutions were also reminiscent of bills of rights like the English Bill of Rights.

So no question: federal government certainly hit a lot of those issues, and all of those amendments are very important today. We might very well say that the quartering of soldiers â€“ the third amendment â€“ may not be so important, but certainly all of the other ones are quite important to us.

Harmony: We face individual liberties issues today with things that the founders never could have imagined. Things like privacy and expectations of privacy using a lot of digital media today. How do you see the Bill of Rights being invoked for questions like what expectation of privacy a student might have in school using a cell phone, or computer use?

Henry: That’s actually a very, very good question. It’s the issue that becomes problematic because as you note, the founding fathers of course did not think about those particular issues, although they certainly did think in general about the question of privacy. The way the Supreme Court has dealt with the issue is to talk about the reasonable expectation of privacy.

The thing to remember about the reasonable expectation of privacy is that it changes over time. One of the things that I have seen that has surprised me quite a bit is that as I talk to students who are younger and younger, they don’t see privacy the same way that folks who are older see privacy. They tend to see privacy as not that big a deal.

It may well be because of digital media or what have you. Maybe it is because seemingly people are living their lives out in the open. People are putting their lives out on Facebook for everyone to see â€“ they don’t seem to see privacy in the same way that my generation, or a generation older than I do sees privacy.

That’s going to be interesting, because the reasonable expectation of privacy depends on how we currently view the expectation of privacy. So if many of us no longer believe that certain things should be private, it’s going to be more likely that government will be able to look into those things without having to worry about the fourth amendment. It’s really a fascinating issue to think about and discuss.

Harmony: What do you think is the most important thing to remember when we’re considering the Bill of Rights?

Harmony: Thanks so much for being with us today.

Henry: Thanks for having me.

Harmony: This Thursday, November 18th, Colonial Williamsburg will broadcast an Electronic Field Trip that explores a world without guaranteed individual liberties. Tune in for “The Bill of Rights” at www.history.org/trips or on local public broadcast stations.