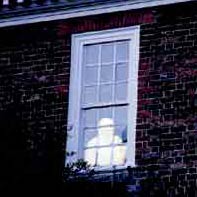 Harmony Hunter: Hi, welcome to the podcast. I’m Harmony Hunter. The Reverend W.A.R. Goodwin, the man credited with the idea of the restoration of Colonial Williamsburg, used to say he liked to commune with the ghosts of history in Williamsburg.

Williamsburg is a town with plenty of ghosts, and my guest L.B. Taylor has spent many years collecting their stories for his book, “Ghosts of Williamsburg.” Thank you for being here.

Harmony: You’ve been chronicling the stories of Williamsburg ghosts for years. How many years have you been collecting and publishing these stories that come to you?

Harmony: You’e a man who started his career with science, as a public affairs man at NASA. How did you come to be interested in collecting these stories of the occult, of ghosts?

L.B. Taylor: It was purely by accident. I’ve been freelance writing in my spare time for over 50 years now. One of my editors in New York asked me to do a book on haunted houses. I had never even thought of the subject before then, but in doing the research, I became fascinated with the phenomena, psychic phenomena, and came across so much rich material here locally that I couldn’t put in that one book because it was national in scope, that I wanted to do some more with it.

When I went back to my editor and said, “I’d like to do a book on the ghosts of Williamsburg, they said, “We’re not interested, regional books don’t sell.” Well, my little book is now in its, I think, 24th printing, and I think it’s sold more than 150,000 copies. So I’ve been pleased with the results of it. I’ve been fascinated with Virginia history most of my life. I’m a native Virginian, and it’s just been a career of writing about things that I’m both fascinated with and have a love for.

Harmony: What was the Williamsburg ghost story that started it all for you?

L.B. Taylor: It was probably the Wythe house. There is a legend there, and let me emphasize that, because some of this is folklorian in nature. To me, and to many others, folklore is like a soft form of history. I had read about it in newspapers and heard accounts of it in years past, that there had been ghostly activity in the Wythe house, attributed to a woman known as Lady Anne Skipwith.

Supposedly she came to Williamsburg a couple of hundred years ago to go to a fancy-dress ball at the palace. According to the tradition, something happened at the palace. She got miffed at her husband, raced out of the Palace, was staying at the Wythe house, lost a slipper on the way, so when she got in the house and went up the stairs, she kind of clip-clopped up, one shoe on and one off.

Well unfortunately she died a short time later, I believe in childbirth. Maybe her miff at her husband was justified, because later he supposedly married her sister, Jean. Anyway, for the past 50 or so years, there have been reports of people being in the Wythe house at night and hearing someone go up the stairs clip-clopping, one shoe on, one off. They think it might be Lady Anne returning.

I got a letter from a lady in Seattle, Washington 10-12 years ago who came to Williamsburg to get a tour, and had read my little book about the story of Lady Anne and wanted to go see for herself. She went to the house at night, got to the top of the stairs, took a photo looking straight down the stairs straight down and in the photo there is an apparitional figure that appears to be the outline of a female. Could that be Lady Anne? Who knows?

So that’s basically the story of the Wythe house. A lot of people, I’ve read other accounts where George Wythe himself is said to possibly â€“ he certainly had reason to return and haunt, because his grand-nephew tried to poison him in his old age to gain his inheritance. But he lived long enough to write his Grandnephew out of the will. But from most of the accounts that I’ve heard, it’s not Mr. Wythe, but it’s rather Lady Anne.

And there’s one other facet to that story. There’s several nightly ghost tours here in Williamsburg now. One of the tour guides told me a few years ago she was walking up to the front of the Wythe house with her group, and there was a lady in colonial costume standing at the front door, and so she kept the group back to allow the lady to do whatever she was going to do, and she said she looked up and she said, and others in her party said, the lady walked through the closed door.

Harmony: What fun. So you said you found a richness of local Virginia ghost stories when you were doing your research. Do you find that a lot of them are rooted in Virginia because there’s so much history here? A couple wars . . .

L.B. Taylor: Exactly. I’ve made a contention that Virginia may well be the most haunted state in the union, and the reasons: one, it has more years of history than any other area â€“ over 400 years now. And two, there’s probably been more tragedy and trauma in Virginia than any other single state. You had the early Indian fights, you had the Revolutionary War, a lot of that was fought here.

More men died during the Civil War in Virginia and more battles were fought here than anywhere else. The so-called psychic experts, if there are such things, say that ghost activity is associated with tragedy and trauma.

Plus, there are so many old houses in Virginia. So that combination of things I think accounts for that.

Harmony: You’ve been collecting these stories for so many years, I imagine you must have heard them all. Can you recall a story that someone brought to you that surprised you?

L.B. Taylor: They surprise me every day. My daughter says I’m crazy because I put my phone number and address in the back of the book, and I do get some strange calls, but yes. There’s quite a few of them. I have looked for the unusual and historic phenomena, and am fortunate enough to still be finding it all over the state.

Harmony: What other kind of historic-related ghost stories do we have that persist in the Historic Area?

L.B. Taylor: In the Williamsburg area, well there’s quite a bit to do with the Peyton Randolph house. I interviewed several Colonial Williamsburg employees over the years that contend they have confronted apparitional figures in the house. One was down in the basement one night when he found, turned around and there was somebody in knee breeches and colonial costume that wasn’t an employee. It frightened him so bad he left and wouldn’t return.

Another woman told me she was almost nudged down the stairs there one time, and of course the classic story there is of a woman, back when it was privately owned was sleeping in an upstairs bedroom when she looked up and saw the willowy, wavy, cloudy figure of a woman standing at the foot of the bed wringing her hands. And she interpreted it as some sort of warning. She didn’t know what or why.

Then you have of course the Ludwell-Paradise house. Lucy Ludwell was a very eccentric character, had lived here in the, I believe the 1700s, and she would do things like, she had a stagecoach-type contraption on her porch. She would have visitors sit in it with her on the porch and have a servant rock it back and forth as if they were going for a ride or something.

She was said to have taken up to six baths a day. She had this thing for cleanliness. I interviewed a former Vice President at Colonial Williamsburg that told me he and his wife constantly would be in the house and hear the tap in the bathtub upstairs running. Every time they went up to check it, there would be nothing there,

Harmony: Based on the stories you’ve collected over the years, what do you think is probably the most haunted place in Williamsburg?

L.B. Taylor: Well it was probably one of those three houses I would say. There are legends that range from the old Capitol to the Palace to across the way here to William and Mary and the President’s house, but I would say probably the Wythe house or the Peyton-Randolph house.

I’ve had several people tell me about the Peyton-Randolph house, that being on the tours at night, they would see what they thought were figures of people peering out of the windows when there was no one in there. So that’s probably got more of a reputation than any other.

Harmony: What keeps you collecting these stories?

L.B. Taylor: The thing I like about doing it is, it’s to me, just a little bit of preservation of part of our heritage. Folklore or legend in nature, and yet, I think ghost encounters and ghost experiences were all but being lost in the glut of modern technology and high-tech and computers. And this is part, I think, that goes along with the history of the area. I think it can in ways enhance the history.

Like I say, to me it needs to be preserved. I can remember when I was a child, and hearing ghost stories was a thrill then. Today, children, all they do is play with computer games and television. So it’s something that I think ought to be some record of it somewhere.

Harmony: Thank you so much for being here with us today, and if you’ like to find the book, “The Ghosts of Williamsburg,” look for it in Colonial Williamsburg bookstores.