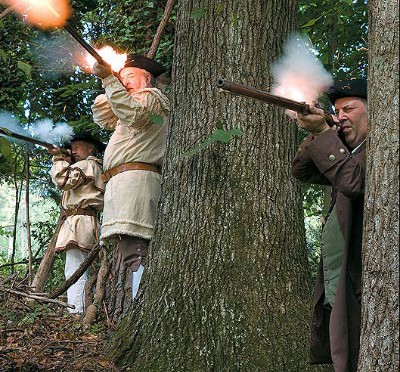 Harmony Hunter: Hi! Welcome to the podcast, I’m Harmony Hunter. When we think of the soldiers of the Revolution, we imagine uniformed troops, marching to battle behind their generals. But there was another force on the field of battle, and those were local militias.

My guest today is supervisor of military programs, John Hill. John, thank you for being here with us today.

Harmony: Well I guess we ought to start by talking about what a militia is. It’s an entity separate from the Continental Army, from regular troops.

John: Yes, and even before there was a Continental Army, we had militia. Militia date back to the middle ages, or maybe even before. But in Virginia, colonial Virginia, every free able-bodied man. As a matter of fact it says, “white males, age 16 to 60,” were required by law to be a member of the militia. And the militia was a citizen army.

These are men that were farmers, tradesmen, and craftsmen. On muster day, which might happen anywhere from two days a year to as many as one day a month, these men would show up, put their regular jobs aside, and go through the military drill known as the manual of arms.

So they would practice the same European drills that the regular British Army were using on the other side of the Atlantic at that time, so they would be ready in a moment’s notice to defend their community.

John: Yes, it’s very subtle but as the century moved along the word white is dropped from the militia law and it says all free men. And the age also changed from time to time so at one point I think the age span was as narrow as 18 to 50. But in the Revolutionary War years it does say "all free males" and not "all free white males."

Harmony: At the time that the Continental Army is established and the Revolutionary War is beginning, you have these two forces trying to work side by side. How does the militia cooperate or not cooperate with formal regular troops?

John: That’s an interesting question. I think one answer to that is to look at what was going on in Williamsburg in 1776, where you have the militia camp for the local rendezvous troops on the east end of town, and the regular troops are barracked or encamped on the west side of town at the college camp. So obviously they didn’t get along that well so they were kept separated by a mile long street.

Harmony: What was enlistment like for both of those forces?

John: It’s interesting that the militia was growing rapidly, so the colony’s population was growing. In French and Indian War the number of militia men â€“ now this is a paper-strength number because only a few hundred in most cases were ever in the field at any one time â€“ but at the high point of the French and Indian War it was about 27,000 men.

In the census of 1770 the number had grown to 41,000. Again, this is the paper-strength number, but that’s implying that there are 41,000 men armed and ready on a moment’s notice in the colony.

Harmony: We talked a little bit before about the numbers of enlistment being higher, at least on paper, with the militia than with the formal regular troops. Can we talk too, contrast, how those two forces are trained and armed?

John: Well before the Revolution and even at the beginning of the Revolution, the citizen soldiers, the militiamen are by law required to provide their own weapons. These laws vary over time, but essentially they are to provide their own firelock. Eventually that’s amended to make sure it’s a shoulder arm and not a pistol, one pound of powder, and four pounds of lead shot and they are to show these items at the county courthouse on their muster day each month.

The logistical problem with that is if you have 60 or 100 men in your militia company you likely have 60 or 100 different guns. All variations of smooth bores, from trade guns, to fowling pieces or shot guns, some of the men have rifled pieces, all different bore, all requiring their own bullet mould, and so a logistical nightmare for the captain of that particular unit.

John: That’s right. The rate of fire is much slower. A few of these men may have surplus muskets with bayonets left over from say the Seven Years War or an earlier war. But very few of them have bayonets, so they provided an edged weapon of some sort, it could be a hunting knife, a tomahawk.

There were a few plug bayonets in existence, where you actually have a knife with a tapered handle that plugs into the muzzle of your firearm. You can use it as a spear, but once you put the bayonet in a barrel, you certainly can’t use it as a firearm anymore.

So, not very efficient and probably the rate of fire was only about one round a minute, maybe two. On the other hand, the regular troops carried a standard musket. In the British Army it’s known as Brown Bess. These are all flintlock weapons but smooth bore, .75 caliber. They actually loaded with a paper cartridge â€“ that’s a paper tube or container that holds both the bullet and the gunpowder, not only the gunpowder to load the barrel but also to prime the pan.

So when a soldier draws one of these from his cartridge box, simply bites it open, puts a small amount of powder in the pan at the lock of the weapon at the firing mechanism, and turns the musket about and pours the rest of the powder down the barrel and rams down the bullet still enclosed in the paper cartridge. Much better rates of fire with a cartridge obviously.

The British Army, at least one document says that soldiers coming to America, and this is in 1776, these redcoat soldiers were expected to fire four rounds a minute. That’s a shot every 15 seconds. One of their last tests to get out of basic training was to fire 15 rounds in 3 minutes and 45 seconds.

Harmony: Many people complained that the local militia were not as disciplined, that they weren’t as dedicated, that a lot of times these guys would run off when it was harvest time, or they would end their service when the threat had left their local area.

John: Everything you’re describing is true of the militia and it’s also true of the regular soldiers in the regiments of Virginia. Because it’s a fact of life. Here we have an army, even the regular army early in Virginia, probably half maybe a little more than half of them are farmers. We’re not talking about plantation owners, we’re talking about small farmers.

There was plenty of information there showing that they did go away, tend their farms a number of times during the year and then come back. Well, many of them came back. In the local Virginia Gazette there’s a point there where the soldiers of the State Garrison Regiment â€“ this is one of the units we represent in Colonial Williamsburg quite often â€“ they were given a number of weeks to return to the regiment and they would be given a pardon. After that point then they would be pursued as runaways from the Army.

Harmony: Could the Revolution have been won without the help of the militia?

John: Probably not, because of this idea that there were armed people everywhere that resisted the British, it made it difficult for them. So I think that that alone says no, we couldn’t have won it without that additional help.

Harmony: We’ve talked a lot about the militia in history, but this is actually something folks can come see today if they visit us in Colonial Williamsburg. Tell me a bit about the interpretation that happens at the powder magazine where you work.

John: Well the powder magazine, or the public magazine as it was known then, we have an original building that was built in 1715 so it’s approaching being 300 years of age. It was the storehouse of arms, gunpowder and other military equipment for the militia. It could also be used by the regular army if it was in fact in Virginia.

Today we interpret that building. In that building today we have a collection of several hundred firearms, many of them are antiques, more than 100 pieces are original. This includes swords, polearms, carbines, pistols, and muskets. We even have an original field drum from the period. So we have a nice collection to see in the magazine.

Then out in the yard of the magazine we have various demonstrations throughout the day. Over the past few years I guess we have recruited thousands and thousands of school age children to be in the militia. Then we send them away letting them know when their next muster date is. As you mentioned earlier, often their soldiers ran away and didn’t came back, some of them never come back.

Harmony: John, thank you so much for being here with us today.

Harmony: And I hope our listeners will have a chance to come out and visit the magazine in Colonial Williamsburg’s Historic Area.