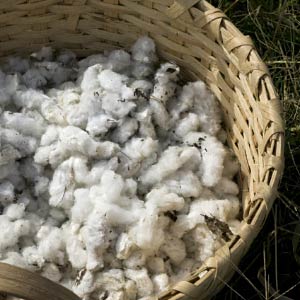 Cotton springs from the ground with a story all its own at Great Hopes Plantation. Farmer Wayne Randolph tells cotton’s story.

Harmony Hunter: Hi! Welcome to the podcast, I’m Harmony Hunter. It’s funny when you think about it, but there are two plants, two crops that have had a powerful influence on America’s economy.

The success of the American colonies was built on tobacco, it was the first North American export that proved to be profitable. But another crop came on the heels of tobacco and grew to dominate the next century, and that was cotton.

My guest today is agricultural specialist Wayne Randolph. He’s a farmer at Great Hopes Plantation, and he’s here today to tell us more about this plant. Wayne, thank you for being here today.

Harmony: The success of these two crops kind of makes you wonder whether we work for them or they work for us.

Wayne: Well, they do work for us in that they fulfill a need that we have. With tobacco it was pretty much a cash crop need and would be so later in the 19th century with cotton. In the 18th century however, it was a domestic need that we had a relationship with that crop for.

Harmony: We know tobacco begins being planted at the very beginning in Jamestown in the 1600s, tell me when we start to see cotton being planted in North America, in the colonies.

Wayne: It starts pretty early on. It was one of the first crops experimented with by those in the early years of the 17th century, the Jamestown people. But really as soon as tobacco hits, it hits big, and it dominates every other option and promotion that might come along. So we dabbled in it a small amount through the 17th century but it wasn’t until the 18th century that we began growing more of it again for domestic use.

Harmony: You’ve been growing tobacco for several years at Great Hopes plantation here at Colonial Williamsburg, when did you start experimenting with cotton crops?

Wayne: About three years ago as we begin to focus more on the Revolutionary period here at Colonial Williamsburg. We thought that that crop and other fiber crops like flax for linen and even hemp, which we would love to explore but haven’t been able to. Those were important during the war to replace the imports that were not getting through to us or were prohibitively expensive.

So there was a good amount of fiber production along with other productions that were focused on domestic, local, and regional needs rather than export which we couldn’t do.

Harmony: So you’re saying there’s a political driver here, which is namely the Revolution. When we go to war with Britain they cut us off, there’s trade embargoes. So suddenly we need to find a way to produce fabric here in North America, in the colonies, for ourselves and that’s cotton.

Wayne: That is exactly right. Fabrics were a big import here, big import, and we all need fabrics and cordage in our lives.

Harmony: I was out at Great Hopes plantation looking at this crop and it was a stranger to me, I didn’t recognize it in the ground. Tell us what this plant looks like and how it behaves.

Wayne: It’s a very interesting plant, it’s a member of the mallow family, it’s related to okra, to hibiscus, to hollyhocks and so it has a an interesting lobed leaf. It’s a hot weather crop, so this year it’s done quite well for us. It grows as a small bush and it puts out flowers this time of year, a little bit earlier this time of year all the way through to the end of the year it will put out flowers.

Every day it puts out a new set of flowers that must be pollinated by insects that day to make the bowl of fruit that will hold the cotton and seeds. So it’s a low crop usually 3 to 5 feet in height for us. It’s more like a bush, we plant it on hills as we do all other Native American crops and we cultivate it. We don’t do a lot of other work to it as we would with tobacco.

Harmony: These flowers that you mentioned; they’re quite vibrant, it’s surprising.

Harmony: Tell me more about the plant. Is it happy in Virginia, do you have to work a lot with the soil to make it thrive? How does it grow?

Wayne: It’s a crop that we found in our experimentation to be difficult to get established. We have a hard time getting those seeds out of the ground and up. We plant them in May when the soil warms up and until it gets going in May and June. It can be difficult, but once it gets going it does quite well and the hotter it is the better it is. It doesn’t really like a lot of water.

Harmony: We know that historically it required a tremendous amount of labor and this is where you get this slave workforce to tend these plants. What kind of tending does it require?

Wayne: We have to cultivate it as we do tobacco and other crops, we have to re-hill. We understand that it was also suckered and topped, we remove additional shoots to kind of direct the plant and we top it as well.

Our experiments have shown that we have no difference in the yield of topped and un-topped plants, but it is said that that was done. Kind of in keeping with our habits of managing tobacco but not nearly as intensive. For example, we do not inspect every leaf every other day as we do with tobacco but we do keep it clean.

It is a relatively heavy feeder, it does well on rich loose soil, but it’s not nearly as demanding as tobacco in that regard. So we don’t do a lot with it really once it gets going. It just takes off and we don’t have to do much.

Wayne: Well that’s interesting because it is harvested very late in the year. We will not see the bolls, the fruits, dry and open up to reveal the fluffy cotton that we’re after until about October and November. So it’s a very late opening crop.

All during that time it continues to flower, so if you come out when it’s cold in the fall and early winter you may see cotton flowers out there. Now they probably won’t have enough time to mature, but when they open up, then we would go through and pick them out, pluck the cotton from that boll and do a series of harvestings. So it’s not all harvested at once, somewhat like tobacco is not all harvested at once.

Harmony: The boll is kind of like a seedpod, maybe sort of a walnut size? Is that right?

Wayne: It’s about walnut size, it’s very hard, perhaps not as hard as a walnut shell. It’s segmented, so those seams that make up the three or four sections of the type of cotton that we are growing at Great Hopes will open up. They’ll separate and the tops of those can be kind of spiney and prickly and that leads to a lot of talk about bloody fingers when picking.

But it certainly is a stoop crop where you’re bent over and it’s very hot when you're harvesting. So in that regard it is difficult to harvest, but the real difficulty is going to come in the deseeding and the further processing of this fiber.

Harmony: So the challenge becomes the the seeding, how is that addressed through time?

Wayne: We always have to option of taking them out by hand. We do a lot of that with the type of cotton that we grow at Great Hopes which is a black, smooth-seeded cotton that is relatively easy to to deseed.

At the same time, and for many hundreds of years, there was a simple machine called a roller gin, two fluted rollers with a gap between that could be used to squeeze out these smooth seeds. If you’re growing or you’re able to grow that kind of superior fiber then that would be fine.

If you had a machine like that you could do about five pounds a day. Otherwise, it’s about one pound of cotton per day when you pick it out by hand. In the early years of our involvement with this crop, before the Revolutionary War, it was not unusual to hand pick it often at night or on rainy foul weather days.

Harmony: You mentioned that you’ve been experimenting with this crop for just about three years. What are some of the discoveries that you’ve made that have surprised you?

Wayne: The one I referred to initially of getting it out of the ground -- getting it up and going has been much more challenging than I anticipated that it would be. The rest of it has not been difficult for us and particularly with the insects the boll weevil really is not a problem here in this area, it’s pretty much eradicated. But we always keep our eyes open for it, because if it were to reemerge it’s extremely serious problem. But the real surprise to me has been the beauty of that blossom.

Wayne: We are cultivating it all by hand, essentially totally by hand, or with animal powered help preparing the soil.

They, of course, are mechanized and they also have an arsenal of modern chemicals to address various problems. But probably the greatest difference would be the productivity of what you see out there.

As you know, deseeding was mechanized by Eli Whitney, who invented a machine to rip the fibers off from the seeds that hold that fiber very tenaciously. So that is a cotton gin applied to that type of cotton. That innovation would remove a logjam and enable the United States at that time to participate very vigorously in big cotton. Our story is the story of little cotton.

Harmony: Wayne, thank you so much for being here with us today and we hope all our listeners will come on out and see everything there is to see at Great Hopes Plantation, including Wayne and his cotton.

in Trades & Technology | No comments