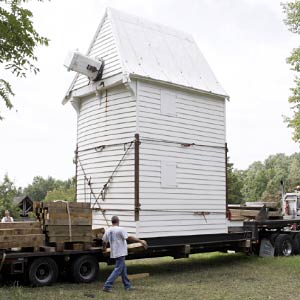 History hits the road when an iconic windmill moves to a new home. Hear the story behind Robertson’s Windmill from Jim Horn, CW’s Vice President of Research and Historical Interpretation.

Learn more: "The Miller and the Windmill" from the journal Colonial Williamsburg Moving the Windmill press release

This summer, a familiar Historic Area landmark will find a new home. Robertson’s windmill, the iconic white-sailed building that has stood behind the Peyton Randolph house since 1957, is moving to a new home at Great Hopes Plantation. Jim Horn, Vice President of Research and Historical Interpretation at Colonial Williamsburg, is here to tell us what it takes to move a windmill. Jim, thank you for being here today.

Harmony: Let’s outline this project. Maybe first we can talk about the windmill in the Historic Area for folks who might not have seen it.

Jim: Well, as you say, it’s quite an icon. It’s been there for more than 50 years. I don’t think anyone can miss it, it’s a very tall structure, and with those very familiar sails, it’s something that’s important to us to retain, to conserve, this windmill. There are a couple of reasons why we’ve been considering a move.

So it doesn’t fit the historical chronology, and we’ve been therefore considering where we might place it, because there might be a better place for us to locate it. So that was one reason, the whole historical accuracy of that site, Peyton Randolph being one of our premiere sites.

The other reason is that windmills are very complicated pieces of machinery. I had the pleasure of going inside and looking at some of the internal workings. It’s almost like a huge wooden, if you can imagine, a huge wooden clock with cogs and wheels and so on, a massive piece of oak that the sails are attached to. It’s complicated in there, and it’s a complex job to maintain it. So we are aware that there needs to be some extensive maintenance. In view of that, and in view of the fact that it’s probably not the right location for it, we made the decision to move it to our rural plantation, Great Hopes.

Harmony: We’ve said that Great Hopes is the final destination after the windmill is moved. What made you choose that location?

Jim: It fits more into a story that we can tell at Great Hopes about the kinds of activities that went on in 95 percent of Virginia at the time of the Revolution. We have a very rich experience of the urban in Williamsburg at the time of the Revolution. The whole point of the reconstruction, or the construction of a plantation of a middling planter from this period is to give our guests some sense of what it was like to live in the countryside.

So if you think about it, that was much more the typical experience for most people inhabitants of the colony on the eve of the Revolution. So in terms of thinking about the kinds of activities we can portray at Great Hopes with respect to tobacco cultivation, the keeping of livestock, the lives of enslaved workers, the lives of planters and white workers there, I think having the windmill there gives greater scope to those range of activities that we can portray. So I think that will enrich the experience at Great Hopes.

Harmony: When you were trying to find a spot at Great Hopes for the windmill, did you have to consider finding something that was on a hill, somewhere that could get wind?

Jim: Actually another issue with the Peyton Randolph site is that when that windmill was originally put in 50 years ago, there weren’t that many trees, large trees around. So at that point, the windmill did operate. As those trees have grown up over the years, it literally took the wind out of the sails. That’s a great pity.

We can’t operate the windmill at the moment, and we initially have no plans to operate it at Great Hopes. But we have a location that would allow us to do so, should we be able to refurbish it so that it would be operable. So it was actually trying to find a place where we could get wind to fill the sails of the windmill.

It’s also actually, I should mention a place where as you come out of the visitor’s center on the walkway, it’s going to be easily visible. What that does is attract people to the Great Hopes site. Great Hopes has good visitation, our guests love being out there. This is a visual cue really, to come out and see this wonderful site that we’ve constructed there.

Harmony: We’ve talked about the placement of the windmill and allowing it to be able to capture any wind that does blow by. Is there a mechanism on the windmill that allows them to catch whatever breeze might be blowing?

Jim: Yeah. It sounds rather strange. I think most people probably think of a windmill standing in a fixed way. This is a windmill that was constructed on a turning post. So you could manually pull the windmill around 360 degrees to catch whatever wind was available. So it’s quite flexible in that sense. It’s like a building that’s on top of a central turning post with struts out that support it when it needs to be stable. But you could orientate the sails in such a way that you could get the wind.

When you’re talking about power, it’s a reminder too I think that in a pre-industrial age, obviously no electricity, no gas. What we’re looking at as the key drivers of power are: wind, water, fire I guess, and muscle power â€“ animal power and human power. Those are what are available.

So besides windmills in this region at the time of the Revolution, there were a number of watermills in this area. Sawmills for the creation of sawn plank so that men didn’t have to pit saw by hand, and of course the windmills were generally used for milling purposes, grinding corn. So you know, where you can utilize water, and there’s plenty of that in this region, or wind, that was a labor-saving device. In some respects, I guess we’re returning to that.

Harmony: We know why the windmill needs to be moved, and why it’s advantageous to relocate it. Let’s talk about how. What’s the first step in trying to relocate a recreated historical structure?

Jim: Well, the first step is to make a thorough assessment of the integrity of the structure. This is an old building â€“ or a relatively old building. It’s a very valuable structure. When it was built in the ’50s, it was built to the patent of an English windmill of the same period. We believe it’s a very accurate reconstruction of an early 18th-century English windmill. So this is something that is fragile, and we have to be very, very careful about how we’re conserving it. And that’s the approach we take.

So we will do an assessment and have done an assessment of the integrity and we’re satisfied that the main structure, the body of the windmill is structurally sound and can tolerate being moved. Anyone that’s passed by the site recently will note that we’ve taken the sails off. That’s because there’s some rot in the wind shaft, that large piece of oak that the sails are attached to. And we wanted to protect just the sails and that wind shaft. So we’ve removed those sails.

We’ve removed some of the undergirding of the windmill and jacked up the body in preparation for the move so we can take the turning post out and other structures beneath the body of it so we can move it. And then it will go, the main body of the windmill will go on a flat-bed truck and be driven at round about four or five miles an hour upright â€“ so we’re not laying it down on its side, it will be upright â€“ over to the new site.

Now, this is a fairly tall structure, so you don’t want to take out traffic lights or power lines. You have to consider that. That would damage local infrastructure as well as the windmill itself. So we’re being very careful about the route and how to avoid those lines so we can get it to the new site safely.

Then there’s a process of putting down the footings for it, preparing the site at Great Hopes and then jacking it up, moving it on to those new foundations, and then installing and repairing it. And that’s going to be probably 18-month or so project to complete all that work. So it will be a little while before we can have it available in its final form to the public.

Harmony: All of our historical buildings and recreated buildings are important, but this building is kind of one-of-a-kind in that it’s sort of half machine and half building. Why do you think this building in particular is important to preserve?

Jim: Well I think people are attracted to windmills for that very reason you mentioned. It’s a large wooden machine. The only comparable kinds of machines in the 18th century, if you think about it, was probably shipping, you know, in terms of complex structures. But to have something like this on land is quite something. To give people an opportunity to get inside it and see it, I think, is well worth preserving that for guests to enjoy in the future as they have done over the last 50 years or so.

I think finally with Great Hopes, as I mentioned earlier, I think we’ve got a wonderful opportunity to make better use of it. That’s what we’re about. We can teach people about what life was like on a plantation, and the fact that for many people, taking corn or grain to the mill was an everyday part of their lives, or occurrence.

So it says something about the texture of life in that period. And that, after all, is what we try and do here at Colonial Williamsburg, is bring 21st century guests back to the 18th century as a reminder of how our ancestors lived not so very long ago. That’s our mission.

in Archaeology & Conservation, Miscellaneous | No comments