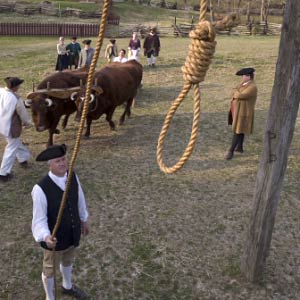 The hangman’s noose was the last stop for many a felon. But the ultimate penalty could be avoided with the recitation of one special psalm. Historian Linda Rowe explains the Benefit of Clergy.

Harmony Hunter: Hi, welcome to the podcast. I’m Harmony Hunter. My guest today is Linda Rowe, a Colonial Williamsburg historian. Linda, thanks for joining us today.

Linda Rowe: You’re very welcome, thanks for having me.

Harmony: If I, in the 18th century, had committed a felony -- say, bigamy, manslaughter, maiming, or grand larceny -- I would be doomed to the noose. Unless I could say some magic words. If I could repeat this phrase from the Bible, I would be spared from the death penalty. Tell us more about this “get out of the noose free” card.

Linda: Well, at least up until the early 18th century, you were pretty much doomed to the noose, except for a benefit of clergy plea. That strange title for an act or a motion in a court stemmed form ancient practice involving the trial of clergymen in England. There were ecclesiastical courts and there were regular courts of law.

But essentially what it did was to give you one chance to, it didn’t overturn your conviction, but it saved you from the noose once, if granted. So it became a sort of an expected thing. If a person was convicted of clergyable offenses, clergyable felonies, they could escape the hangman’s noose by claiming benefit of clergy.

Harmony: You could use the benefit of clergy plea for certain felonies, but not all felonies. What other felonies might have been on the list that would incur the death penalty?

Linda: Everything from certain forms of theft, certain levels of theft, to horse stealing, pickpocketing, blasphemy, in England, witchcraft. So there was quite a long list that, to us, appear to range from the very serious, such as treason and murder, to something that would appear to us to be less serious: thievery, and burglary.

Harmony: Before we go any farther I think we should tell people what are these magic words. This is a verse from the Bible, Psalm 51, is it?

Linda: Yes, it’s verse one of Psalm 51. It’s one of a series of psalms that asks for a special relief from sin. So if you want me to quote the verse, I’ll have to read it for you. But it’s asking for mercy, the words being:

Have mercy upon me O God, after thy great goodness: according to the multitude of thy mercies do away mine offences. So it’s a way of asking for mercy from the court, but ultimately from God as well.

Harmony: Not a bad verse to have memorized.

Harmony: So in practice, if a white man is convicted, he first has to be declared guilty. And at that point he says, “Uh, benefit of clergy please.” And he recites this verse?

Linda: Originally he would have recited the verse. After that requirement was suspended by the general assembly in Virginia, that was no longer part of the procedure. The judges decided if he was eligible for benefit of clergy. If he was, then a brand was applied in open court, either by the sheriff or one of his minions, and sent on his way. It was painful, but considered merciful if you weigh it against hanging.

Harmony: Tell me more about branding. Did each courthouse have a sort of set of branding irons?

Linda: Well, the general court and the court of Oyer and Terminer at the Capitol here in Williamsburg was certainly had a brazier of sorts, the branding iron. One that had a “T” for various forms of theft, another for manslaughter. Manslaughter was unintentional murder and was considered eligible for benefit of clergy.

So depending on what realm your crime was in, you got the “T” or the “M.” So each, the general court would have had something to heat the irons up in, the two irons, and then someone to apply the brand to the brawn of the thumb, as they called it, the base of the thumb. You wouldn’t be branded except in connection with the benefit of clergy plea. So it’s not that branding was another form of punishment.

Harmony: You started talking about the origins of this, and it goes back to the early church and, is it 4th-century England?

Linda: It could go back that far. Technically when the Roman Emperor Constantine accepted Christianity. It really became more prominent when the pope in Rome began to be the head of the universal Roman Catholic church. His desire was to protect the priests, the priestly order in all countries.

He headed a series of ecclesiastical courts which did not, although it tried people and clergymen for various crimes, it never imposed the death penalty. So the idea behind benefit of clergy originally was a plea before the trial to get the trial of a clergyman moved to an ecclesiastical court.

Harmony: So in essence, this places the church above the law.

Thereafter, it was a plea that was available to any convicted felon who was eligible for benefit of clergy. The reading test was instituted, all kinds of holdovers from earlier times, but by that time, it had become kind of a pro forma plea in regular law courts.

Harmony: You mentioned a reading test. Explain that to me. How did that limit who could use the benefit of clergy plea?

Linda: Well, at the time that it was available only to clergymen, they were among the few people in medieval Europe who could read well. So they were supposed to come to court in their clerical dress, with the special tonsured haircut, but many courts of law did not accept just that. They also added the reading test to confirm in their minds that this was indeed a clergyman. That’s how the reading test even got into it.

As it became extended to more and more accused criminals, it was probably the case that just the man on the street who was accused of a crime could memorize the verse, even if he couldn’t read it. So you see there, they accepted that, probably knowing that he had memorized it. So from there, the reading test was eliminated altogether about 1706 in England and 1732 in Virginia.

Harmony: As benefit of clergy evolves, it’s kind of unrecognizable from its early roots. It goes from being a tool of a very exclusive sect of people to something allowed in a more democratic way.

Linda: I suppose I wouldn’t apply the term “democratic,” but it’s a way of lessening the severity of the legal system and the punishments it doled out before a general reform of the law was contemplated or undertaken in those earlier periods.

in Health & Life, Miscellaneous | No comments