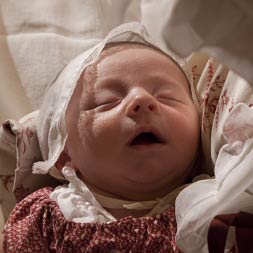 Thousands of Williamsburg mothers entrusted the delivery of their babies to midwives and man-midwives. Medical historian Robin Kipps outlines the ancient profession.

If you were a child who needed to be born in the 18th century, chances were you were going to meet a midwife on your way into the world. My guest Robin Kipps is a medical historian with Colonial Williamsburg. She works at the apothecary and answers questions about midwives and midwifery all the time.

Robin, thank you for being here today.

Robin Kipps: Thank you for inviting me to come.

Harmony: Well before we get too deep into the topic, I guess we should say what it is. What is a midwife?

Robin: A midwife in the 18th century would be a woman who had been trained either by another midwife or a man-midwife, and her job description would be caring for the mother before, during, and after the delivery.

Harmony: Who could be a midwife?

Harmony: It is. Now is a man-midwife something separate from a doctor?

Robin: This is actually a part of an apothecary or surgeon’s trade. So it’s something that they can add to their medical practice. There are very, very few 18th-century people that specialized as just man-midwives. There are a couple of men in London that had their own private schools, and you could probably say that they’re specializing. But in the colonies, it’s just another aspect of your medical practice.

Harmony: What qualifications would you have to have to be considered a midwife?

Robin: You know, today there’s a lot of academic qualifications but in the 18th century we’re actually seeing some references about the moral character of the person as being considered criteria to practice as a midwife. Because you’re actually there to document that the baby is born alive or is stillborn. So you’ll see moral character as well as middle age: a woman who is who is middle aged and of sensible qualities.

Harmony: You mentioned there were a couple ways that you could become considered qualified to be a midwife.

Robin: There’s a case of John Galt who practices in Williamsburg as a man-midwife. He had trained in London under Colin McKinsey, who had his own private school. So he comes back to Williamsburg and actually trains a female midwife. Mary Rose advertises in the Virginia Gazette that she was trained under John Galt and William Pasteur. So that’s one option, would be to train under another practitioner. The other option would be to train under another midwife.

And then there are medical textbooks that are published in the 18th century which are geared for either male practitioners or female practitioners. So it’s a combination of hands-on practice as well as textbook study.

Harmony: What do we know about what the training included?

Robin: As far as man-midwives, there are actually cases of Americans going to school in London and writing home to their parents explaining what the curriculum is like. And Samuel Bard, who’s an American student who studies in London under Colin McKinsey, writes home to his dad and says that the curriculum included history of midwifery.

It was understanding a little bit about conception, problems which could complicate delivery, the tools that would be used, and also how to handle complications during delivery.There are also some cases of them using mannequins and then actually delivering using a mannequin.

Then when they understand the basics, actually going to a delivery and delivering a patient. So again, it’s classroom as well as hands-on practice at that time.

Harmony: And we have pretty good records of this trade being practiced actually in Williamsburg, in the colonial period. We know a good amount about two or three midwives.

Robin: Catherine Blakely, her obituary is in the Virginia Gazette and when she dies in 1771, her obituary mentions she was an eminent midwife and had delivered upwards of 3,000 children, which I imagine kept her pretty busy. And Mary Rose, who advertises in the Virginia Gazette and when she advertises she said she was ready to treat “ladies and others.” It’s speculated that “others” might have been referring to the slave women at the time.

Harmony: And some man-midwives as well.

Robin: John Galt, who practices in Williamsburg, we actually have some of his account books and he actually does attend some deliveries. His charges tend to be a little more expensive than what the midwives are charging. Generally the man-midwives are taking care of the complications that the midwives are not being taught how to handle.

Harmony: So do you think that we see these different midwives serving different segments of the population?

Robin: There’s evidence to support that, but what we really wish we had was a handwritten diary from a Williamsburg midwife. To date, nothing has surfaced at this point.

Harmony: What were some of the complications that a midwife might be expected to be able to handle?

Robin: Traditionally in the professional textbooks written by man-midwives to teach midwives, it specifically says that midwives do not need to know a lot of in-depth details on anatomy, therefore they do not need to know how to handle a lot of complications. So they are actually trained to turn over the complications to the man-midwives. And in the 18th century they actually considered most deliveries normal.

However, their definition of normal would be different from our definition of normal today. But you do see some really unusual cases where we know of a midwife in Ireland in 1730s that actually did a caesarian section and the mother did survive. But that’s very, very unusual to see a midwife do a caesarian in the18th century. They’re technically being taught to turn those cases over to a man midwife.

Harmony: I think a lot of people now consider childbirth to be one of the riskier things you could undertake in the 18th century. Do we know much about mortality rates for infants and for mothers in that period?

Robin: Unfortunately we don’t have any Williamsburg or Virginia statistics. But, one of my favorite medical historians, Laurel Ulrich, took an 18th century diary that was written by Martha Ballard, and she was a midwife in Maine late 18th century. She mentioned that in Martha’s diary there were only about five mothers out of 1,000 that died, and they weren’t during the delivery, they were after the delivery. And as far as infants, there were about 14 stillbirths in 814 deliveries and 5 infant deaths within an hour or two of birth. So again, we wish we had that kind of statistical information for Virginia but, it hasn’t survived.

Harmony: Do you see midwives as being very prominent people in the town, in society?

Robin: Within society and their contribution to society I think they were very well respected at the time. Of course within the professional hierarchy of healthcare in the 18th century, an apothecary surgeon that would be performing midwifery does not have the status of a physician. So to an 18th century person, a physician’s at the top and then the apothecary, and the surgeon would be below that.

Harmony: Do you see a lot of commonality as far as the same practices being used in the 18th century that might still be in use today?

Robin: I think when it comes to being concerned for the wellbeing of the mother and the baby and using state-of-the-art equipment, each era has its own paradigm or system of practice and it’s taken very seriously. Some of the complications in the18th century that we cannot deal with very well would be like hemorrhaging, infection, which today we can easily resolve. So some of the medical conditions that are encountered by both centuries would be the same.

The one thing I think that’s interesting comparing is like today if you’re having a baby with ultrasound you know in advance how many babies, and the gender, and in the 18th century it tends to be a surprise. So the midwife might say well, “We have one,” and then, “Wait a minute, we have two.” So it’s a big surprise.

Harmony: What about tools? Are there some of the same tools still in use today that you see in the historic record?

Robin: You know, it’s interesting. Obstetric forceps are actually in use in the 18th century. Your professional textbooks in the 18th century will tell you not to use them unless you absolutely have to, and in modern medical practice there are some people that still use them but not to the extent that they had been in use.

Harmony: What do you think it’s important to keep in mind about this this trade?

Robin: I think it’s interesting when you’re looking at historical references to look at it in two ways. One is take your modern knowledge and look back and do a compare and contrast and see how much things have changed and appreciate the changes.

So I always think it’s important to look at it both ways and to respect the past for what they know and appreciate today for what we know.

Harmony: Robin, thanks so much for being with us today.

Robin: Harmony, thank you. It was nice to meet you.