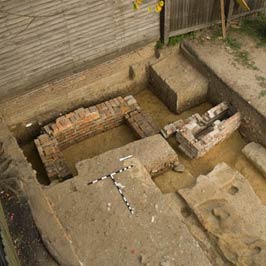 Archaeology at Anderson’s Forge unearths the story of a city preparing for war. Staff Archaeologist Andy Edwards talks about the dig.

This summer, with the help of a generous gift from Forest Mars Jr., Colonial Williamsburg begins reconstruction on Anderson’s blacksmith shop, long a favorite with visitors. At the end of the reconstruction process, six new buildings will have been added and the site’s interpretation will expand from a single blacksmith’s shop to a public armory: an industrial complex of trades all working together to arm Virginia for revolution.

My guest today is Andy Edwards, and Andy, what can we say your role is in this undertaking?

Andy Edwards: I’m a staff archaeologist with Colonial Williamsburg and, me and along with our staff are working together on this to uncover more evidence about specifically the kitchen, right now that’s going to be reconstructed and oter parts of the buildings.

Harmony: So the first phase of this is a dig and you’re heading up that effort, an archaeological dig. Tell me how that works.

Andy: We start off by deciding what we need to find out, what we need to know to further the effort for the reconstruction of the armory. So we go in and do a lot of research beforehand in order to get a handle on what’s been done. Because we’re not the first archaeologists and some of us have been there several times before.

Archaeological work at the armory began in 1930, 80 years ago. But so we decide where we’re going to dig, who’s going to participate in this, and we set up the excavation like we always do and get started. We got started on June 1st in two different places.

Harmony: What are you looking for now in this excavation?

Andy: Ok. We’ve got two things going on. We have an excavation in which we’re uncovering the remains of the kitchen, which was actually built around 1760 for the, what later became the Anderson House and we call it the Anderson House. But the kitchen was used to cook food, we think, for Anderson’s employees and he had about 40 employees when he was a public armorer. So when that operation got going, he had a lot of folks to take care of.

So we think this kitchen, which was probably very similar to other kitchens in the Historic Area around larger houses, was used for that purpose when Anderson was running the public armory. So that’s the way it’s going to be reconstructed and used. So we’re trying to find out everything we can about that building. Now, as I said, it was first found in 1930 and then Ivor Noel Hume’s crews excavated it again in 1975.

So we’re trying to find if there’s any evidence for anything that was left from those excavations. We also need to uncover the chimney base, there’s a very important drain that’s associated with the building, and remnants of the foundation, in order to get brick sizes so that the brickyard can make the proper sized bricks so we can do the reconstruction more accurately, determine whether the drain was actually a floor drain or a slop drain. Try to find the floor level if any and determine whether it was a clay floor or a raised floor and that sort of detail.

Harmony: We should remind folks that in the 18th century the kitchen was not the kitchen that we understand in our homes today. It would have been a separate outbuilding sort of, separate from the main house.

Andy: People will understand when they travel around Williamsburg or in this area that of course in the 18th century folks cooked their food over an open fire. Having an open fire inside your house when it’s 95, 100 degrees outside is unpleasant so they put the kitchens on the outside, or made it a separate building.

Also, fires sometimes get out of control and if you burn down a kitchen it not as quite nearly as bad as burning down your house. Two good reasons to keep your kitchen outside. I think I’d like to put mine outside these days myself.

Harmony: Let’s describe this site for folks that might not have seen it. We have the Anderson House, which is, what would you say, this is a middling house?

Harmony: So a nice big house that fronts on Duke of Gloucester Street. Then behind it and kind of perpendicular to the house itself, sits a forge which now we have blacksmith operations taking place in. That was reconstructed in the ‘70s?

Harmony: Now we’re digging back into it now, literally. Is that because what’s there now is incorrect or maybe just incomplete?

Andy: I think what’s there now is a different interpretation than what we are wanting to reconstruct at this point. I think we’re looking a little later into the 1770s when this was the public armory. We’ve learned more about how the buildings were situated and how the forges in the building were situated.

We know that, there was a kitchen that was not reconstructed in ‘83 that we want to do now and we’re looking to reconstruct not only the blacksmith shops and tin shops and whatever other activities were going on there but, this is a whole complex that extends all the way from Barraud which is on the next corner, where Mr. Anderson actually lived. He didn’t live in the Anderson House until a little later. So and he started his operation at the Barraud House and what’s now the kitchen over there and expanded that operation over to behind the Anderson House, in the 1770s as public armorer.

So what we want to do is get a handle on how the entire complex worked. How did they bring materials in, get materials out? What were they doing in each of the shops? Which ones were iron forges, was there a tin shop, where was it? They were repairing uniforms and other weapons, making guns, that sort of thing â€“ exactly where were they doing that and what can we learn about that would sort of fill in and make this an entire complex rather than a single shop?

Harmony: So before the Revolution really loomed near, Anderson just puttered along with a single blacksmith’s shop. What happened right at the eve of the Revolution for him?

Andy: At the eve of the Revolution, he was made public armorer, became essentially a contractor to the state, the new state of Virginia, to repair weapons and to contribute to the war effort, which he did until 1780. Of course you know, Williamsburg was occupied by the British in 1780 and it was probably a good idea to move, so he moved along with the capital itself to Richmond to continue that effort. He continued to be public armorer until the end of the war. After that he came back to Williamsburg and resumed his blacksmith’s shop.

Harmony: When I came out and visited the site where the dig is happening now, what struck me was that there is a dirty sooty blacksmith shop with many chimneys and forges and fires, right in the backyard of kind of a nice house. I wondered if you see any evidence architecturally that they tried to orient the forge or distance the forge from the house, because it seems like you wouldn’t even be able to open a window without letting in clouds of ash.

Andy: I think their sensibilities were different than ours, for one thing. There is a fence, so the backyard was kind of separate from the blacksmithing operation and from the armory operation. But you know you look, you look at Geddy, there you have a foundry and a gunsmith shop on Palace Green, smelly, dirty.

You’ve got, or even earlier Brush at the Everard House, what we used to call the Brush Everard House, right next to the Palace and he he’s got forges going, he’s a gunsmith. They did put the tanneries a little bit out of town because they were a bit stinky, but mostly industry and domestic activities went along together.

Harmony: You’re digging two sites now: one has been uncovered and recovered at least twice before, the kitchen site?

Harmony: So you’re not expecting to find really any new stories coming out of that dig but you’ve started something that’s not been dug before out behind the blacksmiths shop.

Andy: That’s true, what we’re looking for back there, which is on the west side of the shops which were built along a ravine that have been somewhat filled in by the 1770s, it was in the process of being filled in. We’re thinking that if we cut into that ravine, that we will, might get some things that were cast off from the shop and we can get a better handle on exactly what they were making.

We might get mistakes, which are always interesting, but we’ll get a better handle on the kinds of things that were going on in the shops and maybe in the individual shops that are within the large operation.

Harmony: As you’re out there digging with your team or really on any dig that you do, as an archaeologist what’s the best thing that can happen for you?

Andy: The best thing that can happen for us is to find information that contributes to our knowledge of the site. And that can be artifacts, it can be individual features that is, you know it could even be a couple of post holes.

But if it contributes to what we know about what was going on in particularly the 18th century or we can address activities that were going on in the kitchen for example if we find faunal material, animal bones, and kitchen debris, from the kitchen we can determine the kinds of foods that were being cooked. These are interesting questions.

Harmony: People can come watch this process of discovery happening all this summer. How and where can they come see you and your team at this dig?

Andy: We are there from 8:30 in the morning until about 4 in the afternoon Mondays through Fridays every day. We’ll be there until probably around mid-August and they are more than welcome to come and talk with us.

Harmony: Andy, thank you so much for being with us today and I hope all of our listeners get the chance to come out and see you and your team in action.

in Archaeology & Conservation, Research and Publications, Trades & Technology | No comments