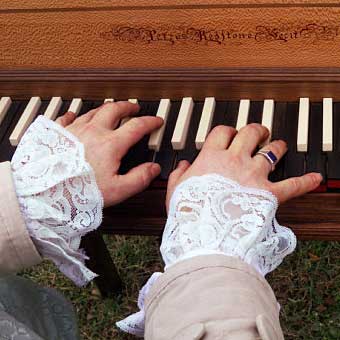 Harmony: For an audience that can only hear us, and not see us, can you try to describe a harpsichord? What does it look like? How big is it?

Ed: Well by our time in the middle decades of the 18th century and being an English culture as Williamsburg was, there really are two forms that a harpsichord mechanism could be found. One would be a large grand model that would look a little bit like a grand piano. You’re sitting at the keyboard and the strings run straight out to you and it’s much the same sort of harp shape that a piano possess.

What I actually build though is a much smaller, more compact form that’s called a spinet. It still has that harpsichord plucking action but everything’s compacted. If you got an overhead view, the profile of the instrument looks like an angel’s wing. So you still have a bit of a harp shape but things have been shortened, things have been made smaller.

You might look at these little bentside spinets, as they were called, as being a counterpart to our upright piano. Smaller, more compact, cheaper, this way more people have access to type of keyboard instrument without having to bankroll their entire lifestyle in order to get one of these large ones. We’d be talking, the difference of a large instrument compared to a spinet might be costing in the 18th century anywhere from six, seven, eight times what one of the little spinets would cost.

So the little spinets that I build in the shop are definitely a bargain, guaranteed. The large harpsichords could easily get seven, maybe eight feet long. The little spinets that I build are six-footers on average and with my spinets running six feet they may run also perhaps about two feet wide just because everything’s compacted and angled to give you just a smaller package.

Harmony: And the decorative motifs can be very elaborate both inside and outside.

Ed: Oh very much so. Now, the English were very fond of decorating their harpsichord cases with woodwork -- usually veneers and decorative inlayed borders. They’ll do this on the large harpsichords and they’ll do this also on the spinets. There’ll even be decoration inside the cases, just a little area of the case wall that is just above where the strings and the soundboard are located will have sometimes something very simple, like just one single line of a light colored wood on a black background. Sometimes they’re beautiful patterned rectangles with borders in herring bone and banding work.

So they come in a variety of decorative motifs. Then of course if you expand beyond the English tradition, oh my goodness, Flemish harpsichords that were made on the continent they would decorate them with printed papers. I like to say they were kind of wallpapering their harpsichords a bit.

French harpsichords will have gilts and they’ll have beautiful paintings done on the lids and on the soundboards as well. So these are treated, at that level, these are treated as much as works of art as they are musical and sonic pieces.

Harmony: Who would have had a harpsichord?

Ed: I would say that if you were a successful middling person, either say here in Virginia running a middling level plantation or if you were a businessman or businesswoman here in the city, you would have the means financially and certainly I think as long as you’re minding your financial affairs appropriately you’d have good credit to be able to get a hold of one.

Of course this obviously was not the case in the 18th century. But because of that, music and musical instruments I think loom very large in the scheme of things for many people. It’s one of the few sources of entertainment that you have. People who don’t have access to buying an instrument or a harpsichord will sometimes make one for themselves.

Ed: I guess in the most refined of circles it was often the considered the appropriate instrument for women. In some respects, just for that purpose a woman basically being able to play the harpsichord, her arms are displayed gracefully, she cuts a very good figure, looks good, especially if she’s single and wants to make a good impression on some of the men in the room this might work passably well.

Harmony: What makes the harpsichord unique among instruments?

Ed: Well for the first part of course is that of the keyboard instruments, it has quite a bit of age and a very long and honorable history. We can trace harpsichords back to maybe the mid-1400s if you go to picture examples. I think the oldest one still surviving is from the late 1400s. And then we have examples of them from that point on up until our own age.

I think of course the fact that the character of the sound is so distinctive because of that plucking action, if you compare it to a modern piano which has this deeper more robust kind of tone. And of course also with a piano having a hammer action to strike the strings, the piano has a little bit of an edge on the harpsichords in the fact that when you press the keys harder the strings are hammered harder and it makes a louder sound.

So you have loudness and softness control note for note. The plucking action of the harpsichord doesn’t allow for that, which is probably one thing that led to its eventual demise toward the end of the 18th century in favor of the piano. Music and music making is just simply heading in some different directions that it’s very difficult for the harpsichord lacking that subtle extra expressiveness that it just simply can’t keep up with and so pianos will become the order of the day.

But I should mention as well too that it’s not a situation where harpsichords evolved into pianos, Charles Darwin doesn’t have anything to do with this, ok? So pianos actually were a formal invention around the year 1700 in Italy, it was not the first attempt to make a hammer action keyboard instrument but they come very early and it takes a while for the pianos to gain traction.

It’s not a situation where suddenly, oh my goodness, we have hammer action keyboards, pianos, and everybody goes crazy about these things and forgets about harpsichords. Oh no, it takes decades for the piano to gain even an equal footing with the harpsichords. People don’t drop the harpsichords and that bright plucking action just because these pianos are now around.

Harmony: What is it that you love about this instrument? What keeps you coming to work every day?

Ed: Well first of all I like to talk about them, a lot. So having the teaching aspect I suppose if you want to call it that, whether visitors come to the shop every day is always a pleasure. It’s a big project that I like to say is full of little projects that have a beginning, middle, and an end, and then it all comes together into the final package. So I kind of like the variety of that as well.

But being able to produce something that obviously is not just there to admire with the eyes but also produces such a pleasurable sound which is music. Music, I think, touches all of us, even for those people who think they don’t appreciate it very well I think it touches us, and that’s what I like about this so much.

Harmony: Ed it’s been great having you, thanks so much for coming by today.

Ed: Thanks for having me, it’s been a pleasure talking to you.

Harmony: And where can people come see these harpsichords being reconstructed today?

Ed: Look for me at the Anthony Hay cabinet shop on Nicholson Street. It’s a real distinctive place. We’ve got the main shop and then we have a wing which is built over a ravine with a flowing stream underneath it. You can’t miss us. So please come by, we’ll be glad to talk to you.