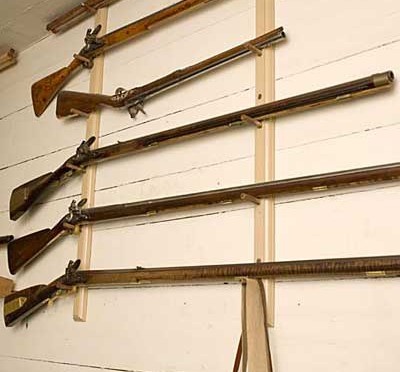 Muskets, swords, buttons and drums convey powerful memories of the soldiers who claimed them. Curator Erik Goldstein highlights some of his favorite military treasures from the Colonial Williamsburg collections.

Learn more: the Governor's Palace The Geddy Gunsmith and Founder

Harmony Hunter: Hi, welcome to the podcast, I’m Harmony Hunter. Erik Goldstein has been a frequent guest on this program and he’s with us again today. Thanks, Erik.

Erik Goldstein: Thanks for having me.

Harmony: Erik is a curator of mechanical arts and numismatics at Colonial Williamsburg and he’s stopped by today to talk about a few of the really outstanding examples of military treasures in the CW collection.

Erik: Well we certainly have the largest collection of Revolutionary War period Brown Bess muskets. Those are the standard British soldier service musket of the early 18th through late 18th century period. Plus we have a very diverse collection of other things that really range from tiny little commemorative medals and award medals straight on up to portraits, engravings, drums, things like that. So we have a little bit of everything.

Harmony: So they might not always be the finest examples or the most ornate or most expensive but it seems like it’s a really, as you said, a diverse collection.

Erik: Rather than focusing on getting the finest example, or the best preserved, we’re more interested in getting objects that we can document as having been used in various colonial episodes. So really, the history is far more important to us as an educational institution than a thing of great beauty.

Not that a thing of great beauty is anything to scoff at, but to me, a musket that may have been carried at the siege of Yorktown in 1781 has much more of an interesting story to tell than a gun that may have no history at all, that just happens to be kind of attractive.

Harmony: On the topic of firearms, you mentioned that we had the largest collection of Brown Bess muskets. This is the workhorse of the American Revolution, what can you tell us about that musket?

It was just a good serviceable musket. It could stand up to the beating that it took in the hands of a soldier mostly living outside, marching all over the place, it was a good sturdy serviceable weapon.

Harmony: What other sort of firearms do we have in our collection?

Erik: We have a few American arms, not too many of those, some that were produced in Virginia during the American Revolution. We have some of the gentleman’s type firearms from fancy silver mounted pistols up to really high end American rifles and fowlers, things like that.

Harmony: You mentioned that we have very few American weapons, tell me why that is.

Erik: Because there were very few American weapons made before the end of the American Revolution. For instance, here in Virginia at Rappahannock forge up near Fredericksburg on the other side of the river in Portsmouth was the ironworks of one James Hunter who set up a very large-scale manufactory for firearms and swords during the American Revolution, but his output was relatively small and consequently very few pieces survive.

Harmony: So you could say largely the American Revolution was fought and won with British weapons.

Erik: Well I would say it was moreâ€¦ it was begun with British weapons but it was finished with French weapons. It’s a real melting pot of stuff. If you had to look at all the stuff used by both sides in the American Revolution. The British had the British stuff, the French had the French stuff, and the Germans largely have the German stuff.

Harmony: Moving past firearms, what other types of weapons do we have in our collection?

Erik: Well we have a number of polearms, which were more ceremonial than anything else. You wouldn’t go into combat expecting to fight with your halberd if you were a sergeant or with your spontoon if you were an officer, they were more symbols of rank.

The weapons that really were meant to fight with were swords and bayonets â€“ things like that. Again, much like some of the halberds, a lot of the swords that were carried during the Revolution were really just ornamental things or things that were meant to symbolize rank, the rank of an officer with one exception being the light cavalry saber.

Harmony: Tell me about that saber. What makes it different?

Erik: The cavalry saber, at the Revolution, it’s a gargantuan thing. They usually have a blade that’s approaching three feet in length. They were made in large numbers in New York City and other locations throughout the colonies because the light cavalry troops of the period actually were doing combat with their swords.

So, one particular cutler in New York City named James Potter was making swords for the loyalist cavalry. These swords were so sought after and so high in quality that the Americans, who these loyalists were fighting against, sought to capture them in battle and actually use them against their creators. So we really have a unique situation here where we have both sides doing horrible dismembering combat with the same weapon.

Harmony: What are the edges like on those swords today?

Erik: You couldn’t shave with it, but they’re still pretty sharp in most cases.

Harmony: We also have a collection of artifacts from the men who comprised the troops.

Erik: We do. We have a number of things from tiny little buttons and while today nobody really pays any attention to a button unless you lose it, but buttons during that time period were used to display a little bit of a esprit de corps, the spirit of the regiment, so most buttons that were worn by various regiments in the army on both sides were regimental.

So British buttons largely were numbered and American buttons bore occasionally patriotic motifs or an intertwined U.S.A., which was one of the most common buttons. In fact, we found lots of these in a cemetery behind the Governor’s Palace.

Harmony: Why is there a cemetery behind the Governor’s Palace?

It’s known that the governor’s palace was being used as a field hospital after the siege of Yorktown and it looks like they were burying the soldiers who died of their wounds in what was then the vegetable garden of the palace. So I think something like 156 bodies were interred there and they were discovered quite by accident around 1931. They were excavating the grounds to reconstruct the palace and the cemetery is there intact today under one of the gardens.

Harmony: But the buttons that we have in our collection were taken from their graves?

Erik: The buttons were removed from those graves are in archeological collections and we have other buttons from other sources in the collections department.

Harmony: Something that we don’t normally think of as a military artifact but which we have several very good examples of are musical instruments. You have a drum which you purchased kind of on a long shot which turned out to have a really interesting story behind it.

Erik: There was a drum that showed up for auction and it was painted with the crest of the Royal Welsh Fusiliers, which is a famous unit that fought here in the American Revolution. In fact, they were in the colonies for a period of almost 11 years.

This drum was perfectly identical to those drums carried in the American Revolution structure-wise but it was painted with a Napoleonic era battle badge. So I thought, “Well I’m never really going to find a true British Army drum of the Revolution, one that’s structurally identical to a Revolutionary War piece.” You can only really tell it isn’t because of a painted device.

So we bought this drum and we have a brilliant conservator of musical instruments, John Watson, who disassembled this piece and made some interesting discoveries. See, it’s not uncommon for a drum as a thing that doesn’t really wear out to see 50 or 60 or 70 years worth of service in the in the Army. It’s not like a musket that has moving parts that gets worn out.

And what he discovered is that the paint that we had seen on the drum was original to the early, early, early 19th century, but it was second campaign of paint and tack decoration on this drum.

So it looks like, just to recap, that this is a drum that was old when it came into the hands of the Welsh Fusiliers and was carried on up and retired shortly after the Napoleonic wars. So if this drum was retired in 1815 and it was already 50 years old and it was a captured drum, a reused drum, then it’s not impossible that this is something taken during the American Revolution and used by the regiment, a common practice during the period.

Harmony: What did you find underneath that second coat of paint?

Erik: Under the second coat of paint we found the holes for where a second, earlier set of tacks had existed and those are the brass dome headed tacks that you see decorating drums.

The tacks had been removed, it had been filled up, and then the coat of paint that you can see on it now was applied. So there was something else there. For us to see what the painted elements were on the wood we would have to so some pretty serious potentially destructive analysis and haven’t taken it that far.

Harmony: So it sounds like it was pretty well disguised. What gave you the hunch that it might be a Revolutionary War drum from our period?

Erik: Just the way that it was manufactured. Typical for Revolutionary war it didn’t really have metal fittings to hold the hoops on, things like that. There were no metal fittings that helped tension the snares which are the little cord pieces that give a nice crisp rattle, didn’t have any of that which is something you normally see on a Napoleonic period drum. So we kind of thought this was probably an earlier piece.

Harmony: If you’re a military enthusiast, what are the spots you’re going to want to come hit at Colonial Williamsburg and what are you going to see there?

You want to go talk to the gunsmiths and the brass founders at the Geddy site because not only are they recreating period firearms using period technology, it’s also a site that we know was performing extensive gunsmithing services during the Revolutionary War period. We’ve found lots of gun parts there that date from right around 1775.

And last, but not least, I think you want to catch some of the aspects of Revolutionary City where you’ll see some of these military accoutrements reproduced and used properly. So it’s all over the place, it really is.

Harmony: Just for fun, what’s your favorite piece these days?

Erik: My favorite piece these days is the one I’m about to acquire.

Harmony: Erik thank you so much for stopping by again today.

Erik: Thanks for having me. It’s always fun.