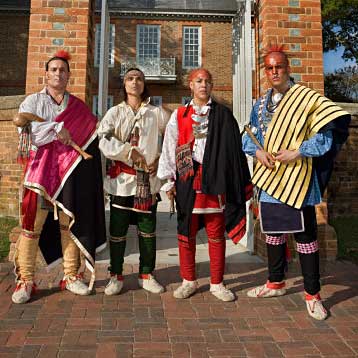 Learn more: So Far From Scioto

Harmony Hunter: Hi, welcome to the podcast. I’m Harmony Hunter. My guest today is Buck Woodard, who is manager of the American Indian initiative at Colonial Williamsburg. Buck, welcome back to the show.

Buck Woodard: Thanks so much for having me.

Harmony: For so long we’ve been able to tell more fully the stories of Europeans in Virginia, the story of African Americans as they were brought to Virginia. What is allowing us now to shed more light on the experience of Native Americans during the 18th century period?

Harmony: We can talk specifically about a scene which Colonial Williamsburg is performing as part of its street theater program, Revolutionary City called “So Far From Scioto.” Tell me about that skit and how it helps to bring the story of the Shawnee people into the Colonial Williamsburg narrative.

Buck: Well, So Far From Scioto is a scene that focuses on a time period at the end of Lord Dunmore’s War in 1774.

Harmony: And what was that war about?

Buck: Lord Dunmore’s War dealt with the borders of Virginia at that time, Western Pennsylvania and what is today Ohio. As with all frontier situations, there’s conflict. There’s negotiation, there’s push and pull factors that are taking place. There’s people that come together on a frontier where there’s a lot of exchange and there’s So, there’s these series of conflicts on the Ohio border country of what was then Virginia that put the Shawnee right against the British interest in that territory, and so there were challenges on both sides.

It eventually led to a conflict, and Dunmore’s War was a war that was fought about that boundary and about that frontier. And eventually, the Shawnee came to a truce with Dunmore at Camp Charlotte. Part of the agreement was that they would stop raiding the Virginia settlements along the frontier and they would come together for a formal treaty of peace, later in the spring of 1775. But as good faith, the chiefs of the Shawnee sent four hostages to Williamsburg â€“ diplomatic hostages. They’re not prisoners, they’re not captives, they are diplomatic collateral.

They come to Williamsburg as a part of that diplomatic exchange. So they’re here as the governor’s guests. They arrive around Christmas of 1774. But they’re definitely here in formal dress and they’re treated very well. They stay in Williamsburg through, most of them stay in Williamsburg through July of 1775. So they’re here at the beginning of the American Revolution, and they witness the unfolding drama of the patriots wrestling with the Gunpowder Incident and Dunmore’s fleeing of the city and Virginians taking control of the capitol.

The Shawnee are witnesses to all this, and they have to decide what their course is. Do they have an agreement with Dunmore and the crown? Or do they have an agreement with Virginia? And the settlers on the frontier are Virginians. Is it best to make this peace, a lasting peace, with Britain, or is it to make a lasting peace with the Virginians? So they have to wrestle with these issues, and that’s what our scene really is. This point in time in which the emissaries that were left in town have to decide what to do after Dunmore flees.

Harmony: You mentioned that they were in formal dress. Talk to me about the costumes that have been recreated for these actors.

Buck: The wardrobe for the Shawnee scene, we’ve had a lot of research and a great team over at the Costume Design Center and experts, both native and non-native, that have weighed in on what the native dress should be for this period.

We’ve researched it not just here inside the Foundation, but drawn on outside help, both native artisans and to create some of the pieces that we need as well as non-native artisans to pull together some of the props and jewelry and haircuts and hair attachments. We have, we’re fortunate to have a number of descriptions about these emissaries as they make their way into Virginia.

Crestwell’s journal gives a wonderful description of these individuals “cutting a grotesque appearance,” as he described them walking into Williamsburg. They don’t wear breeches, they wear leggings. They have, those leggings are usually made of cloth or of buckskin. They have moccasins, and they have a center seam that is made from buckskin. Their shirts are of European origin, of linen. They would be considered undershirts by the people of Williamsburg, but they’re worn as outer shirts by the natives.

They have breechcloths, so it’s a thin piece of fabric that’s been tucked through a belt, between their legs and back and front with flaps. They have their heads shaved except for the crown, so they have a scalp lock. They have their eyelashes and eyebrows all plucked. So it is a very bald face from the visage of the eyes all the way back to the crown of their head, which they keep long and have it in braid.

They add silver pieces into their hair. Their shirts usually have silver jewelry, brooches attached to them. They are carrying bags and shot pouches and long rifles and flintlocks and knives and hatchets and that type of thing.

But they also have a particular body modification that makes them stand out. They make a cut in their ear that starts at the top of the ear and goes all the way around to the bottom of the ear, and they stretch that outer portion of the earlobe out, very large, and wrap it with silver or brass wire, and so they had very, very large rings out the side of their head that were wrapped in wire that they could also hang other types of silver and cones off.

They may have also had a match coat, just like a type of cloak, a blanket cloak or a chief’s jacket that was specially made to resemble an officer’s jacket in the British military. But it was made for a present between a governor or a military official or an Indian chief. So the four of them arrived in that state.

Harmony: We’ve got a very colorful scene here in which you learn as much from the costumes as you do from the action. What else is it important for people to take away from this scene?

Buck: I suppose there’s been such a narrative in American history that set this continent or this hemisphere as being a wilderness, as being a place that didn’t have human habitation and that it wasn’t until Europeans arrived that history began.So that our time depth for human experience in this landscape is short. But that’s a production of history that’s from one point of view.

So we have as American history thus far had a real disconnect from prior to 1607 or prior to 1492, mostly because American people don’t see themselves they see somebody else. And that somebody else is native peoples.

We have a great team, a very talented group of individuals who have come together to put this production on We’ve been working closely with the Shawnee of Oklahoma through the pre-production time period: language coaching, story development.

The Shawnee from Oklahoma, the absentee Shawnee, the eastern Shawnee, the loyal Shawnee have all been out to Colonial Williamsburg several times in the past year to view the scene, to work with us, to introduce the actors, to talk about next steps for that partnership.

So this production has been possible because of the native people have been behind it and been a part of it. Because of Colonial Williamsburg’s vision to be inclusive and consider these narratives of diversity.

Harmony: Buck, thank you so much for being here with us today. Come see So Far From Scioto, performed Tuesday through Saturday at 11 a.m. and 2 p.m. from April 17th through May 8th in the Governor’s Palace Garden.