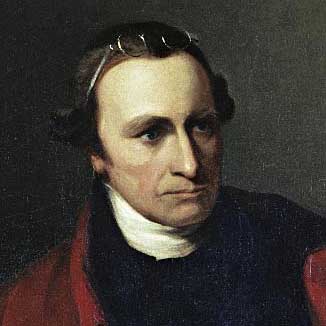 Richard, thank you for coming today.

Richard Schumann: Howdy, it is my pleasure.

Harmony: We know Patrick Henry, as a public figure, as a great orator, five-term governor of Virginia, probably most famously known for his “Liberty or Death” speech, but I wanted to talk today a little bit about Patrick Henry as a family man. He was married twice, fathered 17 children by the end of his life. I wanted to talk to you about his early days and his first wife.

Richard: It’s a sad story, truly, and yet it’s also one that that I’m happy that gets out to the people that come here to Colonial Williamsburg because it shows Mr. Henry as a real man who was battling some terrible personal affliction as the family called it. It was something that was almost a source of disgrace and shame for the whole of the family because in effect his first wife, Sally, went nuts.

Her name was Sarah but they always called her Sally. Sarah Shelton. She comes from a good family, a neighbor to Patrick Henry in Hanover County, her father well to do. At any rate, Mr. Henry and Sally married very young, and for love. She was 16, he 18.

He’d certainly not established himself as anything of note. The one attempt that he and his older brother William had made at a country store failed, so he really had nothing. His father, Colonel John Henry, was also in a financially embarrassed situation at the time. There’s suggestion from people of the neighborhood that the marriage was not looked on so favorably but the early years were very happy. And thenâ€¦she came down with an illness.

Harmony: Now was her illness episodic or did it did it come on suddenly? Was it something she suffered from for several years?

Richard: There’s a great deal of speculation as to what it was that brought her to her ruin. Most scholars today seem to think that it was a severe case of postpartum depression. Apparently she had never exhibited any signs of this insanity, or lunacy, until shortly after the birth of their sixth and their final child together, Nettie. That was in 1771.

Shortly following Nettie’s birth, Sarah developed an antipathy, as they called it, towards her husband and her family. She withdrew from them, she appeared unable to even recognize her own children. It graduated to the point where she was completely mute, would not speak a word, would not feed herself, times when only Mr. Henry could do so, and then later it got even to the point where she was given to self injury, trying to harm herself and even others.

There’s one account, and I don’t know if it’s substantiated or not, but there’s one account that suggests that she actually tried to drown Nettie as an infant when she was giving him a bath. The state of her condition was such that Mr. Henry had made for her a straitdress, like a straitjacket that we still have today. And now, at the same time, there are some modern advancements in the care for those who are mentally distressed.

Here in Williamsburg, in fact, was opened in 1773 the first ever in North America a public hospital that cared exclusively for “lunatics, idiots, and those of disordered minds.” There is substantial evidence to suggest that Mr. Henry did visit that place in 1773, but determined that he was not going to subject Sally that same wretched and barbarous fate.

Instead he arranged for her to be cared for at home at Scotchtown, they were living in Hanover county at the time, in the half cellar: the basement, if you will. And it was about a four-year period of absolute torment for the whole of the family before she finally shuffled off this mortal coil.

Harmony: So it’s horrible, but it’s the best thing he could do for her. I have a description of the public hospital. It’s described as, “Each cell had a stout door with a barred widow that looked on a dim central passage, a mattress, a chamber pot, and an iron ring in the wall to which the patients wrist or leg fetters were attached.”

It’s almost like a prison. And you can visit the public hospital today in Colonial Williamsburg. So really the most merciful thing he could do was try to keep her at home.

Richard: Absolutely right. It took a great deal of strength, a great deal of courage for him to do that. The easy thing of course would’ve been just to pass Sarah off to the public hospital and be done with it. He chose not to do so out of love and compassion.

Harmony: I wonder if this was a point of some shame for him, or something that he tried to keep quiet. I mean, here’s this great statesman on the verge of tremendous political change, and he’s got his wife in a straitjacket in the basement at home.

Richard: We are confident that there was a great deal of shame to the whole family over the state of Sally’s condition. And it’s not so much Mr. Henry himself, though he tended to be very private about his personal life. A remarkable man in that he could separate the personal tragedy that he was undergoing and at the same time still rise just a few weeks after Sally died to deliver “Liberty or Death” at the second convention in Richmondtown.

But the period, the 18th century though being an enlightened age was one where society tended to look at the whole family with a with a twisted eye if there was just one member of the family who was judged to be insane or crazy. It cast a shadow on the whole family. So that’s where the shame would have been.

Harmony: There’s a doctor who sees her frequently, Dr. Hinde, do you know what kind of treatments he might have been offering to her?

Richard: Dr. Hinde was the family physician, you might say. As to treatments, this is a condition that we in the 18th century just do not understand. Presumably, Dr. Hinde was just doing things like physicians, most country doctors usually do: applying a a poultice of tobacco leaves or maybe a little bloodletting here and there, perhaps giving of some laudanum or mercury. Who knows what he was trying to do?

The son of Dr. Hinde is the is the individual from that period who gives us information about the care, and it’s not specific to the point of what Dr. Hinde was doing save for that she was out of her senses and that he did recommend a strait dress to keep her from hurting herself or others.

Harmony: Despite those precautions, I read some speculation that she might have committed suicide. Is there any record of what she finally died of?

Richard: There is no record as to how she finally died. The thing that I as Mr. Henry’s portrayer, tend to believe is that she eventually starved herself to death because there are firsthand accounts coming from his grandson that she would not feed herself. There were times only when Mr. Henry could do so.

I think it was probably that, she just weakened. You know, it was about four years before she finally passed on and not eating and exercising and so forth can play havoc on one’s personal constitution.

Harmony: Weeks after. It makes you look at “Liberty or Death” in a totally different perspective. Because, how disheartened, how depressed he must have been. It’s like he’s a guy that has nothing to lose.

Richard: You know, it took a lot of courage to stand up at that second convention and put forth a resolution for Virginia to arm herself. To come directly out and say, “Great Britain is coming here to force us to submission, they’re going to do so with military might, what have we to oppose them, let’s get ready. They want war, bring it on.” That’s what “Liberty or Death” is all about. The first public call to arms throughout the whole of America, took a lot of courage.

And you do have to wonder -- did his own personal tragedy give him the strength or the courage to be the one to stand up and make that call? We’re always trying to make things relevant here at Colonial Williamsburg and if it is indeed postpartum depression from which Sarah or Sally suffered, it’s something that even our founding fathers had to grapple with.

Harmony: Richard thanks so much for being with us today. It’s been a pleasure talking to you.