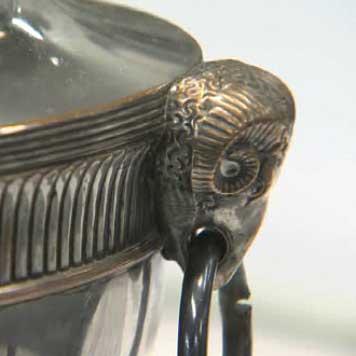 Harmony Hunter: Hi, welcome to the podcast. I’m Harmony Hunter. My guest today is Emily Williams, who is a conservator of archaeological materials. Emily, thank you for being here today.

Harmony: We’re looking ahead to an Electronic Field Trip later this month on Thursday, April 22nd, which is talking about the conservation and the preservation of objects. You have a companion exhibit that’s going to be coming out this summer in the museums that talks about the same subject. Can you tell us a little bit about that exhibit?

Emily: The exhibit is called “Conservation: Where Art and Science Meet.” Our aim with it is to sort of highlight how both art and art history and conservation, along with science, are used to tell the stories of the objects here and to better understand them.

The exhibit sort of follows the life of an object from the point at which it’s made to the various agents of decay that begin to act on it and ways that one might preserve the object while it’s still sort of in general use in homes, etcetera. And then we also look at the ways that we preserve objects in museums.

Then we move into the detective story aspect of conservation, the analytical techniques that we use to understand objects. And then into some of the philosophical and ethical ideas behind conservation, such as cleaning an artifact â€“ when you might not want to clean a piece.

We have a really great plane blade that has the handprint of the user on it. He used it for so many years that it has little stains where the oils from his hands seeped into it. That’s something you’d never want to clean off, because it really tells you about how the piece was used.

But then of course there are other things like a painting, where as the varnish yellows, you do want to clean it. So, we look at those kinds of issues within conservation a little bit more in depth.

Harmony: I was surprised that a 10-degree difference in temperature can exponentially change the rate at which things decay. It’s a great challenge to keep the temperature and humidity, all those things in balance to try to preserve these objects.

Emily: Definitely and we’re really lucky. Many museums have one conservator if they’re lucky but we have conservators in paintings, and paper, objects, furniture, upholstery.

And we have an environmental conservator who her entire job is to make sure that the temperature ranges are right in the exhibit buildings that humidity isn’t floating too high or dropping too low and helping troubleshoot those kinds of things. She has a team of technicians who go out intothe museums and the historic houses and really try to make sure that light levels are right, that pests are being monitored, so to more actively care for the collections that way as well.

Harmony: We talked about humidity as agent of decay. What were some of the other things that objects fall subject to?

But there’s also little things. Reworking an object over time can have effects on its later preservation. But man can also be a great preserver. There are 10 agents of decay that are acknowledged by the conservation profession, but some of them, such as dissociation, which is when an object gets separated from its records, are a lot harder to illustrate.

Harmony: You made a reference to Colonial Williamsburg’s team of conservators, but what I think is interesting is that conservation is a relatively young field.

Emily: Our department of conservation was only founded in’87, but we actually have a much longer history going back to 1930 when Rutherford Goodwin, the son of the Reverend Goodwin, began to look at the archaeological objects that were coming up from the excavations to find the foundations of buildings.

He realized that these objects really could begin to tell a story about the people who inhabited the buildings, and so he pushed quite hard to begin to preserve those materials. And he hired two students from the college, two chemistry students, and he gave them a copy of Alfred Lucas’ book. Alfred Lucas was the conservator who worked on Tutankhamen’s tomb and he had written a book on the conservation of materials from the tomb.

Goodwin apparently said, “Make these recipes work for this environment and this climate and our materials.” And so these chemistry students kind of went to work and began to try and understand the makeup of the artifacts that were being found here and to adapt these treatments.

By 1950, they’d sent out over 5,000 copies of their new conservation manual and lab techniques to museums across America. And so, it really was a very early focus on historical materials and on archaeological materials that weren’t classical, that weren’t things like Egypt and Rome and Greece.

Harmony: Still I love our connection to Ancient Egypt. Some of the â€“ and I think this is related to conservation being a young field â€“ but some of the core philosophies and practices seem almost to try to make sure that conservators today stay out of the way of conservators tomorrow.

There’s a great emphasis placed on the things that you do to restore or stabilize an object to make sure that they’re reversible. That if a better process comes along in the future, that what you’ve done today isn’t permanent.

Emily: Definitely. We recognize as a field that we don’t know everything about everything and that we are still learning a lot about objects and about the way in which they age and what happens to them along their path and also about the new materials that are being invented and that we are using with our treatments.

So the idea of reversibility, of being able to try to take out or to try and reverse a treatment down the road, has become really important to our field. It has to be recognized that no treatment is totally reversible. There’s always something that you do that you can’t undo.

For example, with the archaeological materials that I work on, one of the first steps is often to remove some of the dirt from the ground that’s on them. Of course I’m never going to be able to put that dirt back on, and it’s never going to go back in that same place. So that’s something I can’t ever undo.

As a result of that, a lot of conservators have become really comfortable with the concept of minimal intervention. If we can’t entirely reverse everything, we at least have to try to make sure that we’re doing the least that’s needed to stabilize the object or to reach the goal of the treatment.

Emily: We certainly gain the ability to use a piece in a museum setting to talk about it to interpret it um, and we definitely gain in terms of the long-term stability of the piece through treatments.

On the other hand, evidence is always removed â€“ evidence of the life of that piece. Unless we document that very, very carefully it’s not there for the next person who might be looking at the object.

You know, we live in an era where analytical techniques are being invented and developed continuously. We have to be aware that, you know, in 50 years people are going to be able to look at objects very differently from how we can look at them. And so when we remove some of that evidence, we remove the possibility for them to come in and make new discoveries that we can’t even dream of right now.

Harmony: When can people come see this exhibit at the museums?

Harmony: Emily thank you for being here today, I look forward to seeing the exhibit.

Harmony: Be sure to watch the Electronic Field Trip “Treasure Keepers” Thursday April 22nd on history.org/trips, and on public broadcasting stations. To see video of Emily working on some of the objects from this exhibit, watch our vodcast, which is live on our site today at history.org/podcasts, and in the iTunes store.