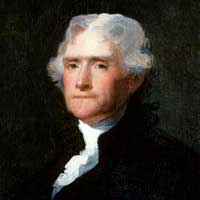 This week we’re continuing our conversation with Bill Barker, who at Colonial Williamsburg, interprets Thomas Jefferson. Last week we talked about Thomas Jefferson’s inquiry into natural history, and this week we turn our attention to his mechanical inclinations.

Bill Barker: Do you know, oddly enough, Jefferson had a very fine tool chest of very well made tools and yet we believe he hardly ever used them? But he did enjoy tinkering with things, he was always someone devoted to improving whatever mechanical device excited him and provoked his curiosity.

I think one of the earliest accomplishments in that regard is his camp stool. It’s a three-legged stool that would fold up, and he would take it with him wherever he traveled. In fact he referred to it as his church stool, because wherever he was on a Sunday and wished attend services, he would not want to displace anyone on their own bench in their own pew, so he’d bring in his camp stool and sit upon it.

What he called his whirligig chair is a tinkering of a device that he saw, we believe, for the first time in Philadelphia. Simply a revolving chair, a swivel chair, and he either bought one of these very early on, acquired on early on. We know that he did make one, had one made at his joinery at Monticello in which he added a writing board onto the chair itself so you could be seated in the chair, turned in any direction, and as well attend to writing on the board that was attached to the chair rail.

His dumbwaiter â€“ now, there are two varieties of the dumbwaiters. The first, of course, is that he has built inside his fireplace â€“ the mantelpiece â€“ and this brings wine bottles up from the basement to be served there in the dining room, a particular mantelpiece he has built in his dining room at Monticello. Again, this is an adaptation. He has not created this out of nowhere. We believe that he saw this for the first time in Paris at the CafÃ© Mecanique, which was probably well known because of that curiosity that will bring wine up from the basement of the restaurant there in Paris.

The other dumbwaiter is simply furniture that is contrived with four or five shelves upon casters and usually a marble top so that the food can be brought and placed on that dumbwaiter and then be rolled around the table for people to take from that. Jefferson can serve from the dumbwaiter around the table in the French fashion. Now, the reason these are all called dumbwaiters, of course, is because it does not have to allow for a waiter in the room. This is most essential, particularly if you’re discussing politics or even scientific investigations that you do not want revealed outside of that dining chamber and the people, the gentlemen, who may be there specifically to talk upon these things.

Harmony: Some of his inventions, they’re practical, but there’s also something whimsical about them. He has some installed in the white house and some of course at Monticello. Can you tell me about some of Jeffersonian inventions, or adaptations, that you can find today in those places?

Bill: Well, you can find the folding ladder. The folding ladder again is not his creation, he had seen it before in Europe. It’s simply a ladder that folds up like a pole, you would think that’s all it is, simply a pole. But when you look at it closely, you see that the ladder actually folds out on its rungs and all of the rungs have moved up into the single pole. So you pull the pole apart, the rungs splay out there in front of you. You can see this still at Monticello, which he used in the hallway there, in the entrance hall to attend to his great clock.

And the great clock, of course, is his own design. Now, what is so curious about the clock is the fact that hung over the entrance door to Monticello with one face out of doors as you approach from the east and the workings and the other face of the clock indoors as you come into the foyer. The cannonballs that are attached to the chain in order to provide the torque and the weight to the clock and the chains are splayed out from the base of the clock along the wall there and then they descend in the corners of the room. How else would they be able to descend in the middle of the entrance door?

And Jefferson calculates that we can ascertain by the descent of the cannonball there in the corner of the room what day of the week it might be by intervals. So he has wooden placards painted up with the names of the days of the week upon them beginning near the ceiling with Sunday and he had initially hoped at the floor finally with Saturday. So obviously at some point if he did not discover it while he was designing the clock to be installed at Monticello, Saturday is not going to fit in the entrance hall. So he simply pokes a hole in the floor and puts Saturday down in the basement. Now, that is probably the most unique and the most special of all of Jefferson’s inventions and that is truly Jefferson’s creation.

Harmony: You’ve brought with you one of my favorite examples: the writing desk that he used and he actually drafted the Declaration of Independence on.

Bill: It is an absolute perfect piece of furniture, I think, designed by Mr. Jefferson with utility and purpose and elegance in mind. It is about, let me see, what about 9 inches by 14 inches by 3 inches. It is what is called a lap desk; you can call it a slope.

It serves as a carryall for your stationary, for your ink, for your quill pens, for your wax and your seals, for it has a drawer that is built into the entire area of the lap desk. It also can serve as a slope to read a book upon by way of a ratchet in the back of it. The ratchet sits into various notches that are cut into the top of the desk so you can lift the top up and underneath that of course the ratchet then can be put in various heights. Then you can simply open up the top more so from the book-reading slope and make a complete writing desk out of it.

You can put a good size sheet of paper on that to write on. Jefferson’s sheets, which were usually about 9 by 7 inches, were the size of the paper of his stationery that he would use. This lap desk was designed by him, he tells us that. It was not manufactured by him. It was not built by him. It was built by his cousin Benjamin Randolph in Philadelphia. Again, Jefferson tells us this.

This is the lap desk that he wrote the Declaration of American Independence on in that June of 1776 when he was renting two rooms from the German brick layer, Jacob Graff, in Philadelphia on the southwest corner of 7th and High Street, now Market Street. Later on, as Jefferson continues to use this, he brings it with him to France. He certainly is using it while he’s the President of the United States.

Beyond that, when his granddaughter, Ellen Randolph, marries Joseph Coolidge, the son of a very wealthy banker in Boston, he gifts this lap desk as an element of her trousseau -- as a wedding present. And he writes on top of it, or writes on a piece of paper that he affixes to the lap desk, the following message, “Thomas Jefferson gives this writing desk to Joseph Coolidge Jr. as a memorial of affection. It was made from a drawing of his own by Ben Randall, cabinetmaker of Philadelphia, with whom he first lodged on his arrival in that city in May 1776, and is the identical one on which he wrote the Declaration of Independence.

“Politics, as well as religion, has its superstitions. These, gaining strength with time, may one day give imaginary value to this relic for its association with the birth of the great charter of our independence.” He writes this at Monticello November 18, 1825, a few months before he passes away.”

Harmony: And he was right, it did become a relic.

Bill: It is, you may see this in the Smithsonian Museum in the Presidents Exhibition Hall. In fact, as you enter the hall, this is in a display case sitting all by itself right there in the middle of the room. So you can look at Jefferson’s lap desk on which he wrote the Declaration of American Independence from all sides.

Harmony: Jefferson was an early adopter of some mechanical gadgets which are common to us today: the odometer, the pedometer um, and a device called the theodolite.

Bill: All of them he purchased when he was a young man, actually, and all of them are useful for various elements in traveling and in surveying. The theodolite was something that was created in the mid-18th century to make surveying the more distinct, the more precise, that you are able to in your surveys provide for height as well as distance of any line to be drawn. And he bought this, we believe his first theodolite was bought in the 1770s. He ordered this â€“ it was not from anywhere in the colonies but rather from England.

The odometer we believe Jefferson purchased while he was in Europe. Of course, traveling great distances he was always curious, “Just how far am I traveling and how can I calculate distances that can be made within a day’s travel?” Or better yet, back in Virginia, “How may I understand how far it will it will take me before I need settle my horses or settle myself for the evening?” So the odometer was quite useful in that regard. He had telescopes, he had microscopes, he had concave mirrors that would help bring light more efficiently and abundantly to his microscopic studies.

Harmony: One of the gadgets that he celebrated the most and saved him the most time was the polygraph machine.

So you put two sheets of paper down on the board, and as you’re writing with the one pen you’re writing a first copy with the other. So here Jefferson is creating copies of all of his letters. You can understand how the polygraph, in Jefferson’s mind, for someone who is writing thousands of letters, at least ten or twelve a day, to him this is the greatest invention of the day. It’s a human fax machine. You’re able disseminate information to the greatest distance and with the greatest number of people.

Harmony: Jefferson’s curiosity and his pursuit of improvements upon mechanical inventions â€“ watching the way that he interacts with that world gives us such an insight into his mind. When you consider the way that his mind works in terms of mechanical thinking, do you see that borne out in any way in his political philosophy?

Bill: There’s no question that Jefferson’s curiosity about nature, the world around him, and man’s capability to better his condition influences his political thought. Jefferson believes that reason is what should be followed by a people in order to better their condition.

Harmony: Bill, thank you so much for being here with us today. It’s been a pleasure having you.

in People, Trades & Technology | No comments