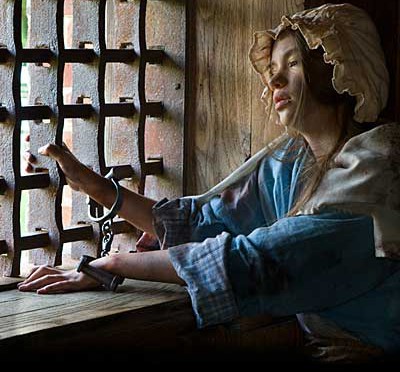 Harmony Hunter: Hi, welcome to the podcast, I’m Harmony Hunter. Today my guests are Jim Dwyer, professor of law at the College of William and Mary, and Cathy Hellier, Colonial Williamsburg historian.

They both consulted on the upcoming Electronic Field Trip, “The Rights of Youth” which premieres this Thursday, March 11th on history.org/trips and on local public broadcasting stations. Thank you both for being here.

Harmony: Well, I’d like to begin our conversation where the Electronic Field Trip leaves off and that’s on the thought which is, “Today we think children should be protected and treated differently than adults in the eyes of the law.” And that’s a departure from where we began in this colony in the 18th century. Cathy, maybe you can start and tell us a little bit in general way about how children were viewed in the eyes of the law in the 18th century, how they were treated.

Cathy: Well they really weren’t viewed as adults. I mean I think we need to establish that first of all. There was a much younger age of consent, I think, when a child was perceived to be able to be prosecuted for felony. But even that was treated rather inconsistently. Judges or justices tended to take a look at the circumstances of the case when making these kinds of decisions.

For example, a book that was written for 18th century Justices of the Peace in the 1730s in Virginia said you really can’t prosecute a child under 14 for a felony. On the other hand, if they’re 8 years old or over and they commit homicide, if it’s clear that they understand what they’ve done, that it was wrong, that they for example, tried to hide the body or something like that, then they can be prosecuted for murder.

There’s not a single rule for even though the law says one thing they might or might not follow that depending on the circumstances of the case. And children of different ages were seen as having different abilities under the law.

Harmony: Jim, could you contrast that with how we see children in the 21st century in the court today?

Jim: Sure. I assume that even in the 18th century that if a child’s committed a crime, it’s not going be prosecuted. Someone would still try to rehabilitate the child in some way. Today we’ve just formalized that. We have a separate court system for juveniles who commit crimes. And so, any person who is under 18 who commits a crime will first typically go to the juvenile court and only if it’s a very serious felony will the child be transferred to an adult court and prosecuted as an adult.

In the juvenile court, which has a civil proceeding rather than criminal, there will still be someone in a prosecution role, accusing the juvenile and a defense attorney defending the juvenile and the court will have to figure out did the person actually commit the crime. But if they are found to have done so, the remedy is rehabilitation, rather than punishment, per se. Although that to the juvenile can look very much like punishment because it can entail going to a detention facility. But, it is in theory a different kind of proceeding on the assumption that a child is still susceptible to being reformed and turning out to be a good citizen even if they commit crimes.

Harmony: Cathy alluded to the age of discretion: the age at which a child is considered to be aware of the implications of their actions. How do we look at that in the present day? Is there a certain age at which we consider a child as an adult? Is there a gray area?

Jim: There’s a variety. We have different ages for all different kinds of decisions and being responsible for one’s actions. So for example, the drinking age now as everyone knows is 21, whereas voting is 18. And there are different ages specified for when you can work, in what kinds of places and at what age you can be transferred to an adult court if you’ve committed crimes.

Not everyone that commits a serious crime can be transferred to an adult court. You have to be over a certain age, which is going to vary by state. So there isn’t a single age of adulthood, we tend to think of it as 18, but obviously things like drinking waits for a few years even beyond that so they’re not really an adult if they’re not permitted to drink alcohol? It’s not such a clear cut-off time.

Harmony: Cathy, Jim talked about a punishment would be a time spent in a detention center. What were the punishments like for children found guilty of crimes in the 18th century?

Cathy: Well, pretty much the same as adults. Whipping, being put in the stocks or pillory and if it’s severe enough, death by hanging.

Harmony: So much more severe punishments than today.

Harmony: We’ve talked a bit about how the law applies to children in terms of their breaking it, but there are also protections that children are entitled to under the law, and I’d like to look at some of those in the light of the 18th century and contrast that with today. Cathy, can you start by telling me about a child’s right to an education? It might not seem like such a privilege to children today, but in those days it might not have been assured as it is today.

Cathy: Well, I mean most children received a pretty rudimentary education, reading, writing, and basic arithmetic. If you couldn’t do those things you really had no skills whatsoever. The community felt that you would become as they said, “a charge upon the parish,” meaning that the parish would have to support you because you had no way of supporting yourself with no skills. So the idea was that parents should be providing some type of rudimentary education for their children or they, the parish, could sort of take over and bind them out as either apprentices or servants.

Harmony: How do we see that playing out today in the 21st century? Is there the same idea carrying through time?

Jim: Today we have a widespread public school system, of course, which is a 20th century phenomenon for the most part. Every state has a statute that says children have a right to an education. At the same time, states permit parents to opt out of the public school system, of course, and even to home school. And whether the right of a child to an education today is greater or lesser than it was in the 18th century might depend on to what extent the state supervises what parents do if they do not chose the state’s own schools.

Harmony: And what about the right to safety? How do we look at a child whose parents might not be capable of providing for them?

Cathy: Well, I think it’s the same thing in the 18th century. If they’re seriously unable to provide for their children, the children may be taken by the parish, and then as they said, bound out as servants of apprentices and if they became an apprentice, they would have the means of making a livelihood through their adult years. So that was actually quite a good thing for the child.

I think sometimes we think that because children today are accustomed to spending their childhood with their parents, we sometimes think that separating a child for an apprenticeship or something like that might be actually cruel. But it was it was pretty commonplace to take a child and have someone else teach them. For instance, you might go to a school run by a minister and not live at home, or you might go to the College of William and Mary and not live at home, or you might be schooled in England. We tend to look at separation from parents in a more negative light than they did then.

Harmony: So some of what might seem harsh to our modern eyes is actually just a difference in culture between their century and ours.

Harmony: Jim, I know that in present day for adults, there is a greater population of African American individuals in the justice system, is that true for youth today?

Jim: It is true. It’s true at every stage of state reaction to misbehavior. So, if you look at statistics for children who have been suspended or expelled from school, there’s a very disproportionate impact on African American children and other nonwhite children.

So, too, in the juvenile justice system you find that white children are underrepresented, that minority race children are overrepresented. And there is concern that this might not reflect necessarily a higher rate of misbehavior or not a higher rate to that extent, that this is some discrimination in how rules are applied. But those are the facts that the population tends to be mostly of minority race.

Harmony: And Cathy, what can we observe about the experience of African American youth in the 18th century?

Cathy: Well, in terms of whether or not there were more of them in the justice system, that something that we really can’t answer because most cases involving slaves were tried in the county courts and Virginia’s county court records, many of them are missing, so we really can’t make a good assessment of how many African American slave children were involved in the justice system. It’s not possible to do that. But in terms of, for example, protections -- a slave child didn’t have the kind of protection against abuse that a white child would have. The master could pretty much do any sort of correction without being stopped in any way really.

Harmony: And in the courtroom an African American would not be able to testify.

Cathy: Could not testify against a white person.

Harmony: How do you feel that the legacy of the 18th century views of protections for children is carried through in 21st century in the present day or has maybe been discarded?

Jim: Ironically, there might be less community intrusion into family life to protect children. Today, there might be more resistance to doing so. Cathy mentioned that removing a child from a home is deemed in such a negative light today relative to the 18th century.

Today, we have formal institutions, we have child protection agencies to guard against child abuse but at the same time there is kind of anti-statist attitude that might not have existed to the same degree in the 18th century. And strong protections for parent’s rights, procedural rights as well as substantive rights to raise their children as they see fit, so including some corporal punishment. Whereas, in the 18th century, that doctrine did not exist and community leaders felt freer to intervene in family life and protect children.

Harmony: Cathy, what would you reflect on as far as our, our legacy of law that we inherited from, from coming from English common law, interpreted into the colonies and then 400 years hence?

Harmony: Thank you both for being here today, and I hope that all of our listeners will tune in this Thursday for the premiere of the Electronic Field Trip, “The Rights of Youth.”

in Education, Health & Life | No comments