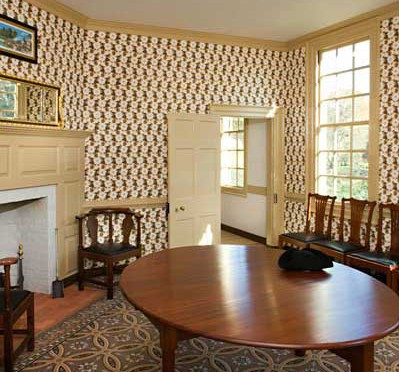 Objects take their places in a scene that suggests a bustling social hub. Curator Kim Ivey describes the interior of Charlton’s coffeehouse.

When Charlton’s coffeehouse was completed at the end of 2009, it became the newest reconstructed building in Colonial Williamsburg’s, Duke of Gloucester street in 50 years. It was the job of researchers and curators like my guest Kim Ivey to recreate the interior of that building. Kim, thanks for rejoining us on the program.

Kim Ivey: Thanks for having me, Harmony.

First let me say that this was truly a team effort by many of the Foundation’s staff. Not only was I working with curators and conservators but I was working with historians, architectural researchers, archaeologists, and so just a number of people pulled together to bring this project to its completion.

The curators work from a number of sources to help us determine the types of furnishings that would be used at the coffeehouse. Well, of course we looked at secondary sources, the books that had been published on American and British coffeehouses.

Harmony: So if I walk into the coffeehouse today, what am I going to see? What is the first room I’m going to see and what’s going to be in it and what is that going to tell me about the room?

Kim: The first room that our visitor walks into is the dining room. It is the best room of the house. We know that from the architectural evidence that was found. Now today our architectural historians have very carefully pieced back together a number of those architectural elements and from their research we know which rooms were the best rooms of our coffeehouse.

We know the dining room, for example, had the best architectural features. Because it had the best architectural features we have then installed the best furnishings in that space. Now, there was no inventory of the coffeehouse during Richard Charlton’s 1765 occupation of that space. But we do have 1779 inventory taken of Richard Charlton’s possessions when he was still in town working as a tavern keeper. And using that inventory we’ve been able to pull certain objects from that inventory to install in our coffeehouse.

The architectural evidence indicated that wallpaper was in that space. Now the wallpaper had long ago disappeared but the paste used to glue the wallpaper to the wall was found on certain architectural elements identified as coming from the dining room. Thus, we feel fairly confident that wallpaper was in that space. And today when you enter the room you’ll see a small-scale floral pattern wallpaper based on a circa 1765 document that was found in a Maryland storehouse.

The original color of the wallpaper was a bright turquoise. We’ve gone a little more subtle. We’re using browns and golds and yellows. It’s just a lovely wallpaper and it’s en suite with the carpeting you’ll find on the floor. Now we have no true evidence from the archaeology or architecture that carpeting was in that space but we looked at the 1779 inventory of Richard Charlton and in that inventory we see he owned carpet rods. Rods were used to hold carpets in place on staircases. This suggests that he might also have owned a larger carpet at some time.

And looking at prints and inventories and other documents, we find that carpeting was used in upper scale taverns and in coffeehouses. We made the decision to install wall to wall carpeting in the coffeehouse. The carpeting is based on a design that was published in Britain in the late 1750s. It is an interlocking design done in browns and golds and the carpeting was actually woven a narrow 27 inch width, taken off the loom and then seemed together to make a room size carpet. A decorative border was applied around the edges of it. That’s very typical of the type of carpeting that was used in about 1765 well into the early 19th century, used in America as well as in Britain.

Harmony: So you go into the dining room, it’s the most opulently furnished room, why is that? Who’s going to be using that dining room?

Kim: More than likely it was used as a private dining space. We know that the governor of Virginia came to the coffeehouse, we have documentation from Governor Fauquier being there. And so it’s likely that the governor or other wealthy businessmen, merchants, burgesses would have rented that space out for dining or for just an evening out. The room also could have been used as an overflow from the more public space, the coffee room.

Harmony: Let’s talk about that coffee room. This is where probably the everyday man off the streets would stop in.

Kim: The coffee room was the more public space. It was were people gathered to exchange news, to conduct business, to have a cup of coffee, or as we know from the print sources and also from the archaeological evidence to have maybe a glass of wine or a bowl of punch.

But also our visitors will notice the fireplace which is outfitted with a number of copper, chocolate, and coffee pots as well as a very large grate holding the firewood, a grill where coffee pots and chocolate pots could have been sat to keep warm. And then a large copper cistern, or pot, that would have held the boiling water used in the process of making coffee and chocolate. All of those objectsâ€¦All of those objects being the cistern, the chocolate pots, the coffee pots are based either on actual objects from the 18th century or from prints and paintings from the period.

Harmony: So this fireplace is really the functioning heart of the coffeehouse. This is where you have a whole collection of coffee pots and chocolate pots across the mantle, your boiling water hanging over the fire.

Kim: We hope that a visitor walking into a space will immediately recognize the function of that room. And if that happens we know that we as curators have been successful and our job of furnishing those spaces to reflect the many activities that took place there.

Harmony: We’ve walked through two rooms. We’ve been in the dining room and now the coffee room. You mentioned a third room, a multipurpose room. How is that furnished and what happened there?

Kim: That’s the room that we call the back room obviously because it is in the back of the house. It was a multifunction room. There’s a desk located in the room outfitted with the many diverse business interests of Richard Charlton. We’ve outfitted a closet in that space with just a number of objects to reflect all the different types of activities that would have taken place in the building.

From that back room Richard Charlton had access to both the upstairs and the downstairs because of two staircases. And so we feel that that was his office. That was his place where he could conduct business, he could oversee the entire operation of the coffeehouse. He might have even rented the space out if he needed to for private lectures or it could have been used as an overflow from either the dining room or the coffee room.

Harmony: It seems like this building is like kind of like a museum unto itself with artifacts and objects which tell a story about the period.

Kim: You could probably say that about all of our exhibition buildings. This one though is different because most of our exhibition buildings are static. You don’t walk in and see a roaring fire. You don’t see the coffee boy serving coffee. You don’t see the person from the kitchen roasting coffee beans at the fire. You do at our coffeehouse. And so this space is different because of those reasons. It’s more alive, it’s active and it is the only site on Duke of Gloucester street where you can experience not only reproduction objects of the 18th century, but also those sights, the sounds and the smells of the 18th century.

Harmony: Kim, thank you so much for being here with us today.

Kim: Thanks for having me

in Archaeology & Conservation, Buildings and Sites | No comments