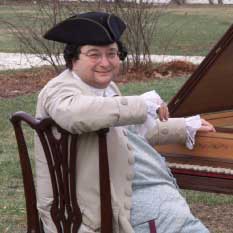 Organist Michael Monaco coaxes the sound of the 1700s from an 18th century organ in William and Mary’s Wren Chapel.

We're coming to you from a special location this week: we're in the Wren building in the historic campus of the College of William and Mary. The Wren building dates to between 1695 and 1700 and is the oldest academic building in the United States. We're in that building's chapel today and we're joined by Michael Monaco, who interprets Williamsburg's early organist Peter Pelham. Thanks for being with us, Michael.

Michael Monaco: My pleasure, thanks for asking me.

Harmony: Well it's the organ that brings us to this chapel today. This is the best representation of an 18th-century organ that would have been heard in the early colonial period.

Michael: That's true. This is one of the Foundation's jewels, to have this instrument. It is an original instrument made in London, circa 1740 or 1750. Unfortunately, we cannot tell you who the builder was. We've had experts in from all over the world looking at the instrument and no one seems to come to a particular agreement upon it.

Suffice to say it's an original instrument, made in London and typical of the English organ of that time. Which would be quite contrasted to, let's say, a German instrument of the same period. It is very clean sounding, it's a pristine instrument and quite accurate for the period. It is intact. You know, to be able to touch something from that period that's still doing what it should be doing“ that's a thrill as a musician. I always like to say, "Who played you?" you know, and just to have that sort of pedigree.

Harmony: The sound of that organ fills this room, but what strikes me is how small the instrument is. I say it's almost like, looks like two phone booths put together. It seems smaller than modern organ.

Michael: It definitely is, shall we say, well-contained. That is the nature of the instrument. These were chamber organs, you know. That's going to change towards the end of the 18th century and you'll see some instruments in London that will rival any in the world in so far as size is concerned but, not now.

Harmony: When you say, um, the music style that's typical of the early 18th century, what is that music?

Michael: You know, even though we were a good distance away, this still was in certain respects a fairly cosmopolitan place and they prided themselves on having the very, very latest. So you could have a brand new composition in London arrive here within months and that would be good. And if you read any of the, for instance, some of the subscription magazines of the 18th century it is amazing to see how much of, shall I say, a disposable society they were.

Harmony: Tell me about Peter Pelham. Who was he in town? What, what status was he in society?

Michael: He's going to come to Williamsburg in 1751, we know this because we have a letter from Landon Carter who states that in 1751, Peter Pelham the celebrated musician is now taken up in Williamsburg. In 1755 he is officially appointed the first organist of the Bruton Parish church -- a job, by the way, he keeps until 1802. So he's here for the duration.

He serves all of the governors in one capacity or another either as private secretary, or shall we say music master of the house, perhaps also teaching Lord Dunmore's children their music lessons. If you go into the Governor's Palace right after you've entered the main entrance upon your right hand side, that great room there, there's a little side cubby hole and that's Peter Pelham's office. So he had access to the palace and considering that he was should we say middling-sort, this was a bit unusual. He was able to rise in society through that musical ability and shall we say through his gifts.

He, interestingly enough, is given a plum of a job by Lord Dunmore in 1771, when he is appointed the keeper of the public gaol. But keep in mind, it's a civil service job. Whether you're the organist, whether you're the gaol keeper, you're serving should we say the crown. Dunmore must have thought quite highly of Pelham because he invests 500 pounds, no small sum, in improving the apartments at the gaol for Pelham and his family to reside in.

Harmony: So we know that Pelham was a celebrated organist and and musician, how was he as a gaoler?

Michael: At one point there was a gaol break but what had happened, and they were trying to say that it was his fault, but they didn't spend any money to maintain the gaol so basically the walls of the cell dry-rotted out and the prisoners just kicked it out and left. You know, who could blame them?

We also have another official record of the Burgesses which states that Pelham appeared before the Burgesses soliciting funds, not for himself oddly enough, but for the prisoners so that they might have better food, and perhaps better clothing. So, that's certainly a comforting thing and I also think that he would probably tend to leave that responsibility at any chance he got so that he could go and you know dedicate himself to music. So it must have been an interesting dynamic to see him functioning in that official capacity.

Michael: You know they talk about him bringing a prisoner to church. There's two trends of thought on that. One, yes he needed someone to pump the organ. But two, this is a little darker, when someone was under a sentence of capitol punishment they were had to be brought to church prior the execution of that punishment. And so some people said that he was merely fulfilling that obligation of bringing that person to church before the inevitable. I like to think of him having just there to pump the organ, getting a little bit of an airing out.

Harmony: What's an example of a song would have been popular then that might still be familiar to um, ears today?

Michael: Well, easy enough. Certainly the most popular tune in London and also we're told here in the colonies, was "Rule, Britannia" A very, very familiar melody and it's you know, iconographic as far as identifying it with things English and that was composed in the year 1740 and immediately caught on.

There are a few dances that are familiar to people. One of the programs I did as Mr. Pelham in the capitol, I think it was last year, and I had some visitors from London and I was doing some of the 18th century dances and they came up after the program, "Oh yes, we dance to that. We have a group that we dance too! We know this! We've heard that!" so on and so forth, so it's nice when you have those commonalities.

Towards the end of his tenure in Bruton, he lost his eyesight and also really started to degenerate physically and mentally, he would sit down and he would start to play the service but he, as one lady said, he was much deranged and physically challenged perhaps you know, reaching that age and his daughter Sarah would slip in and play in his place. And that's one of the earliest examples I know of, of a woman fulfilling that responsibility in a church.

In 1802, his daughter Sarah and her husband Dr. Blaygrove take him with them to Richmond, and he lives the last three years of his life in Richmond. And we think, but we don't really have documentation, that he is buried some where in St. John's churchyard in Richmond, dying at the ripe old age of 84.

Harmony: Michael, it's been such a pleasure to be with you today and to hear this organ played. Thank you so much.

Michael: My pleasure. Thank you for asking me.