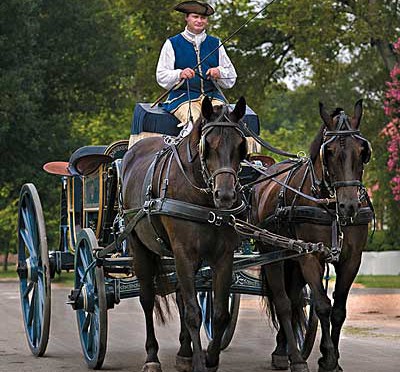 Harmony Hunter: Hi, welcome to the podcast. I’m Harmony Hunter. With me today is Richard Nicoll, who is the Bill and Jean Lane Director of Coach and Livestock. Richard, thanks for being with us today.

Harmony: What types of vehicles, carriages, carts were in use in the colonies in the 18th century?

Richard: The earliest ones of course we see are actually being brought in by the governors. You have a real case of them wanting to show their power and also the pomp. So of course this was copied by other people â€“ wealthy planters or tradesmen who could afford a larger vehicle would try to get the fanciest vehicle they could. So that it again showed off how wealthy they were and their position in society.

Harmony: So those are the very wealthiest people. What about everybody else? What are we making here, what’s being used more commonly?

Richard: Well it’s slowly developing through the 18th century. The beginning of the 18th century, an enormous number of vehicles are being produced in England and shipped over here, particularly the larger vehicles. This stays about the same until the 1760s.

Harmony: Why is that?

Richard: Well, because the manufacturing in England is well-established. Those who can afford to buy the better carriages, the larger carriages, want the latest fashion. They want the best, the best are being made in England. They can afford it, therefore they buy in England. By the 1760s, we’re starting to see many carriage-makers here.

Now, they were here earlier, but tending to produce the smaller vehicles: the two-wheeled chairs or chaises. Those were being used by people who could afford this two-wheeled vehicle just to get around for mainly local travel.

Harmony: How would that work, a two-wheeled chair?

Richard: A two-wheeled vehicle is just used with one horse. So you’re driving that vehicle yourself , or maybe a slave’s driving it and you’re sitting next to them. But on the whole, it would be a vehicle you could drive by yourself with one horse. When you get to the larger vehicles you are using two, four, or even six horses.

Harmony: Some of these wheels are so expensive, and such large outlays of cost and material that they’re actually bequeathed in wills.

Richard: Oh, very much. If you look at any inventory of someone when they die, and their inventory is laid out, if you look at the expense of the items they own, I guarantee when you get to the carriages, particularly the four-wheeled carriages, you’ll see they are one of the most valued items on the inventory after they die of their property. The cost of the wheels is one thing, but the cost of the whole carriage is quite large.

Harmony: How much do carriages weigh? How many of those horses are needed just to move the carriage, the weight of the carriage, much less whatever it’s carrying?

Carriages were built with the roads in mind. So the earlier carriages were much heavier, much sturdier vehicles, and probably went at much slower speeds because of the condition of the roads. The roads were different all across the colonies. The roads in Connecticut were renowned to be bad. Travelers often talked about the roads in Virginia being the best they’ve seen anywhere, even from coming from Europe.

Richard: A road bad is basically what’s in the road, in other words, rocks, ruts, mud. A good road is a more sandy surface, something that’s much smoother. But there is no one norm that you find out there. Each county had their road supervisors, as they were called.

Through most of the 18th century, the average, the voting citizen had to put in so many days a year working on the roads to keep the roads up. Now, of course, the wealthier people would send their servants out to do this work, but that was from English common law that you had to work on the roads, which is a bit of a shock to people. Nowadays if you were asked to go spend three days a year out on the highways.

Harmony: What would you have to do to repair them?

Richard: Well what they would do is pretty limited. Probably clearing away trees when there was large storms coming through. Bridges were being built in limited number, normally that was contracted out. That was passed by the legislative body. And it was filling holes. They’d fill them with mud, they’d fill them with stones. It was still fairly crude.

It was not until towards the end of the 18th century that we see road development really taking off, doing it in a more organized fashion. Now, the roads within the cities, you see these roads being developed much earlier on. But of course it’s because you’ve got an enormous amount of traffic in these urban areas, so that the roads become so bad that the city is forced, or these townships are forced to do something about the roads.

So in Philadelphia or Boston, New York, you already see them starting to pave the roads. That would be cobblestones. So that is taking place much earlier on than any of the country areas.

Harmony: What are they trying with wheel placement and wheel width to try to just mitigate the damage that they’re doing to the roads.

Richard: Well there was a lot of legislation, particularly you see it in England that there were different ideas that if you made the tire wider and wider on a vehicle, it would flatten the road out, and that would help, but it actually was a false premise.

Harmony: What types of carriages were in Williamsburg that we’re representing here today in Colonial Williamsburg on our streets in the Historic Area today?

Richard: Well what you see on the streets today is fairly representative of what you would have seen. We have sociables, which are carriages that perhaps wouldn’t have been seen so much here, but there was also a carriage called a phaeton that might have been relatively similar to these sociables.

The coaches which we have are very similar perhaps to what you perhaps would have seen in the 1770 period. The chairs that we have, which is the two-wheeled single horse vehicles, they would have been fairly common. We know the chair was the most common vehicle seen in this area. They came in a variety of shapes and sizes.

Harmony: As you’re researching to restore and recreate some of these carriages that are on the road today, what do you look to sources in the 18th century to make sure that what you’re doing is accurate?

Richard: There’s a variety of ways you can see. Traveler’s accounts tell you often they are describing something that they haven’t seen before, so they give you a fairly detailed description. Orders, say a planter is ordering from his agent a carriage and he describes what he would like. Builders are describing what they will make for you.

So a carriage-builder is describing how he would make something. Then, it’s often just advertisements within newspapers, where someone is declaring they’ve got something for sale. So it’s a variety of sources. Actual books on 18th century carriages really didn’t start showing up until the end of the 18th century.

We’re very lucky there is a coach builder in England, a man called Felton, who he wrote quite a detailed accounting of construction of carriages and types of carriages and that’s one of the sources that we can look at. He’s fairly detailed on it.

Harmony: It seems like carriages are so vital to every aspect of the 18th century.

How, to begin with, most carriages were being imported from England particularly, but then how the carriage business of making carriages really started to develop in the colonies. If we go into the 19th century it really becomes a major industry.

Harmony: Thanks for being with us here today.

in Research and Publications, Trades & Technology | No comments