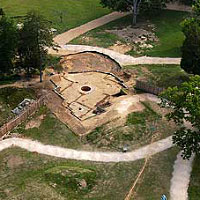 With 60 percent of James Fort unexplored, the island outpost guards a wealth of stories. Bill Kelso continues the hunt for discovery.

Learn more: The Technology of History

Lloyd Dobyns: Hi! Welcome to Colonial Williamsburg: Past & Present on history.org. This is "Behind the Scenes." I'm Lloyd Dobyns, and mostly I ask questions.

Today, I'm talking with Bill Kelso, who is director of archaeology for the Jamestown Rediscovery project. Bill's work is highlighted in the October 11 Electronic Field Trip, "Jamestown Unearthed," a program that examines how new discoveries and evolving technologies continue to improve our understanding of the past.

I don't want to say, "lucky," but I think for the 400th anniversary of Jamestown, finding the site of the original fort probably was as fortuitous as anything you could have come across. Has that really much improved your knowledge of what Jamestown was, and where it was?

Bill Kelso: Who was it, the golfer that said, the more he practices, the luckier he gets? I feel very fortunate that happened when it did. But, 18 years ago, I started working towards 2007, and hoping that there would be discoveries like this. The fact that there's so much left of the original 1607 fort site, however, is a great piece of luck.

Lloyd: I'm from Newport News, I've grown up in this area. We always were told that it was somewhere under the James River, and you were never, ever going to find it, because it had been washed away. I guess I believed it, because everybody did.

Bill: Right. The first time I visited Jamestown – it's been over 40 years ago – there was an interpreter there on the shore. I said, "I would like to stand in the fort," and he pointed south to the river and he said, "It's gone."

But, it was clear – even to me then, I wasn't an archaeologist – it was clear to me that there was this piece of ground actually shaped like a triangle, which is what the fort's shaped like, that had not been investigated. That just sort of stuck in the back of my mind: hopefully, someday, maybe later.

Reading all the eyewitness accounts, there was a hint that this could be in the vicinity of the church. That's the one piece of Jamestown that's above ground, the church tower. That always sort of attracted me. To go on, I'll just say that I read a book that was written by a man named Ivor Noel Hume, who also said that he thought in the vicinity of the church, or close to it, there might be some remains of that fort. I believed him.

Lloyd: Good. Now that you know the basic outline of the fort, and you are checking into what was a well, have you discovered a lot that you didn't know? Or have you just refined the knowledge that you had? Where are you?

Bill: There's a tremendous amount that wasn't known before. Like, where was the fort, for example, and there it is, as you mentioned. Then, what was the town plan, the first town plan within this gated community, if you want to look at it that way.

In the water source, you look in the well. We wanted to find artifacts, and we knew that it would give us some well-preserved environment to find these things. But also, it's unclear what was the major thing that attacked everyone and made them die in those first few years. One of which they blamed on wells. So, we wanted to check, take the written documents and – I'll use this term – "ground truth" them.

That's why I've written a book called, "Jamestown, the Buried Truth." Because, that's one way of refining what words say. History is words about words. Refining that, or giving another play on what the descriptions have been of Jamestown, which is basically, almost sounds like the Lost Colony. Sounds like it failed. So, we'll see what we can find in the ground that would help understand what it was like to be at Jamestown, really. That's what we've been able to do, I think.

Lloyd: Can you tell, from artifacts and digging that you do, what the diseases were that killed people in those days?

Bill: We can't pinpoint diseases, but you can look at stress from studying burials, for example. You can see where there's malnutrition, and you can also find evidence of trauma, and sometimes cause of death. We have found one burial of a man that was killed with a gunshot wound, another one of a boy that was killed with an Indian arrow. That's clear in the evidence that's left in the graves.

But we can test the water in the original wells. It ought to be even more polluted today than it was then, and we're finding it's fresh. I think in some ways, the description saying that the wells were killing people, they were using them as a scapegoat. Really, there were a lot of political mistakes going on by the leaders. They would gloss over that by saying, "Well, the water's bad, it's not my fault."

Lloyd: (Chuckles.) Why does that sound so familiar? I was talking to a doctor who suggested that the problem with knowing what was killing people, as regards fevers, is there were no diagnosticians at Jamestown who had the skills to be able to say, "This is typhoid, this is malaria, this is this, and this is that." They just said, "It's the fever." That sort of did for everything. It wasn't that they didn't care, it was that they didn't have the knowledge. Does that make sense?

Bill: The records indicate there were surgeons and pharmacists, and other doctors – three different types. They had some knowledge of what was going on. In fact, we've found evidence of an operation. A man had been hit with, I think, a stone axe. That's what it looks like on the bone. There was an attempt to relieve the pressure by drilling a hole in the skull. Although, it looked like the man died anyway. Then there was an autopsy after that.

So, this is the very, very Stone Age of modern medicine, but it's beginning. There were people that were studying it. As far as the diseases go, there were descriptions that give different symptoms, so I think they understood that there was more than one way you could go from disease.

Lloyd: It seems that in Jamestown, almost everybody went from something.

Bill: Well yeah, old age, too, as a matter of fact.

Bill: Oh, yeah. There were men called "ancient planters," and they were living into the 1620s. Original settlers. Some of these classes that were here were living longer at Jamestown than they were in London. London was just a mess.

Bill: Jamestown must have looked like a pretty good option, even though you have to get on one of those ships and spend half a year getting here.

Bill: The real key to the success was, when people could get land of their own. First, you went over and you had to work for the company. I think that did rob a lot of incentive for everybody, especially since they weren't finding quick riches, like gold. Later on, the gold is the land. Once people could get land for taking a chance to get on that ship, just to get to Virginia, whereas in England, they had no chance of land. They couldn't get enough ships to bring the people that wanted to come.

Lloyd: I've always been mildly curious – as bad as things were in Jamestown, and they must have been bad to some degree for all those people to die – people still wanted to come. I figured that it had to be, here, you had a chance. Maybe not a good chance, but a chance.

Bill: Yeah, I'm reading a book that starts out, "The American dream begins here." There is that chance. People are still climbing through the borders. There is this opportunity that apparently you don't have in most of the rest of the world. It's still open for that. That being said, there were people coming just for the sheer adventure of going to this … an analogy would be going to the moon, or today, going to the sun now.

Lloyd: Do you think John Smith was an adventurer?

Bill: There's no doubt that he lives on the edge at all times. He'd go into Eastern Europe, fight the Turks before he came to Jamestown. He comes to Jamestown, he almost loses his life, then he goes back to England. The next thing you know, he's on a ship and he's the admiral of New England. He was a driven guy to take risks, no question about that. A very impressive person.

Lloyd: In one book I've read about Jamestown, it talks about John Smith's gunpowder accident, where he burned himself pretty badly, that it might not have been an accident. Somebody might have disliked him enough to set his gunpowder pouch alight, but that strikes me as kind of a hard way. You could shoot somebody easier than that.

Bill: He wrote the account of it happening. I don't know why he wouldn't accuse somebody, because he did not seem to hold back in other ways. Accusing the first president, got rid of him, it was the first impeachment in America. He was not a guy to mince words, it seems, at least the ones he wrote. That's what we have.

Bill: The cannon. I've taken so much grief for that, you know, "Where's the cannon?" If you have a fort, you've got to have a cannon. We found cannonballs, we found gunpowder, I think. Everything but cannon. All the equipment that goes with working a cannon, but no cannon. It's probably not here though, I think they were removed, used elsewhere. But who knows? We've only excavated 40 percent of the interior of the fort so far. We're not even half done.

Lloyd: In 1610- 1611, when they abandoned the fort for a day or an afternoon, or whatever it was, did they not bury the cannon outside one of the gates?

Bill: I'm not sure. Well, they buried their arms, yeah, I suppose the cannon would go, yeah. Outside the gate, that's another neat thing that we've found. We found a main gate, but it's doesn't look like it faces the river. They said the main gate faces the river. It leads straight ahead, straight to the south where the river is. It's clear that their main landing point was in a different direction, and the river, of course, is there. It's where the channel touched the land. We've excavated there, so there are no trenches and moats. I don't think they would have had time to bury cannon.

Lloyd: I hate to say this, but it just popped into my head – the fort did not go into the James, as we all believed when I was a kid. Maybe the cannon did.

Bill: I don't know, we've done some electronic work up and down the shore, too. A cannon would light up like a candle on the machine. I don't think it's there.

in Archaeology & Conservation, Buildings and Sites | No comments